Weight: 1 to 9 kg, depending on species.

Location: Close to rivers, lakes, and tidewaters worldwide except in South America.

Conservation status: The eagles rank from Critically Endangered (Madagascan fish eagle) to Least Concern, depending on the species.

Appearance: All but the Sanford’s and Pallas’s are white-bellied and have white tails. Heads are either white or tan, depending on the species. All beaks feature a high arch.

How do Sea Eagles feed?

Sea Eagles are mostly fishers, diving and snatching prey from just under the water’s surface. They will also steal food away from competitor birds like the osprey. If they catch a fish that is too heavy for them to fly away with they will swim all the way back to shore. Eagles have a pouch in their chests called a “crop.” The crop is a sort of waiting area for the stomach. If the stomach is already full any additional intake of food is stored in the crop until there’s room in the stomach for proper digestion.

How fast do Sea Eagles fly?

It depends on the species, but for example the Bald Eagle travels at speeds between 30 to 50 km per hour, and can burst up to speeds of 120 km per hour.

Like most bird species, Sea Eagles will mate for life, one of the pair only taking on a new mate if the other half of the pair dies. Nests are generally built in trees, the taller the better. If suitable trees are not available (for example, for the Bald eagles found in Alaska) the eagles may build their nests on a cliff. Nests range in size from about 1.5 metres to 3 metres across. The nests are built so large because the hatchlings will grow to almost their full adult size before they leave. During this time they will start to practice their flight mechanics, which involves a lot of hopping up and down, so the nests have to be sturdy enough to take the repeated beatings.

Females will lay from 1 to 3 eggs. The eggs are off-white and are about 7.5 cm long. The parents will trade off incubating the eggs for a little over a month. Once hatched, the hatchlings generally have grey down feathers (not flight feathers) and weigh somewhere around 85 grams, depending on the species. The first egg that was laid is usually the first egg that hatches. The hatchlings (known as eaglets) will stay in the nest for about another 13 weeks. During this time they are fed by their parents as they slowly make bigger leaps to surrounding branches in an effort to practice flight. The first actual flight is called a “fledging.” It will still be about another 5 years before the eaglets’ full set of feathers and colouring matches that of an adult.

Sea Eagles generally live between 20 and 30 years in the wild.

How many Sea Eagles are there today?

Do Sea Eagles have any natural predators?

Sea Eagle eggs and eaglets are prey to other birds and tree-climbing mammals like racoons. 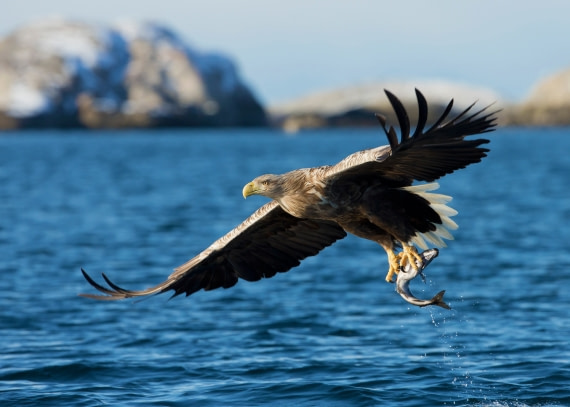