Step into an Antarctic wildlife oasis

South Georgia is home to two mountain ranges – the Salvesen and the Allardyce – which soar to a peak of almost 3,000 metres above the sea. In the summer almost 75% of the island is covered in snow, ice, and glaciers. Come winter, a covering of snow reaches right down to the water’s edge.

The island is also called an Antarctic Oasis because of the huge numbers of penguins and seals that breed here. The marine ecosystem is considered one of the densest examples of biodiversity in the world. Visitors can spot seals on both the land and in the waters, and a variety of whales pass through the area.

South Georgia is one of the remotest and wildest places on earth.

I was on the recent Antarctic trip on Ortelius, 16 Feb - 7 March. This has been my third expedition with Oceanwide, and

South Georgia is an animal lover’s dream. In fact, it’s one of the most wildlife-rich locations we visit in all of our p

To do in South Georgia

Overall rating based on 82 votes

The food and rooms were nice. The staff was pleasant and informative. They tried to get us into as many landings for wildlife viewing as possible. My favorite location was South Georgia Island where we say n

2 things i was disappointed in was that trays of hot foods, ie main entry were not hot, even if i was there when dining room first opened.Would like to have a small gym, maybe a bicycle & treadmill. my f

We had a wonderful 18 day expedition on the Hondius. The wildlife and scenery were magnificent. All of the crew were wonderful and constantly cheerful. The expedition crew were highly professional and worked

An excellent Oceanwide 18 day trip to the Falklands, South Georgia and Antarctica. Fantastic to walk amongst the wildlife in all 3 places. Watching the young male Elephant Seals 'fighting' at 2 beach

Extraordinary experience on the Hondius travelling from Ushuaia to Falklands, South Georgia, South Orkney and Antarctica Peninsula, unique concentration of wildlife in the world, amazing polar scenery and la

Absolute beautiful expedition cruise! The staff went out of their way to give us a lot of landings and we only had beautiful ones. I will honestly never forget all of the beauty we have seen! The vibe on boa

What is the time in South Georgia?

What is the temperature and weather like in South Georgia?

The climate in South Georgia is polar. It is possible that you will experience a variety of different weather types while on a South Georgia cruise. The average temperatures vary widely depending on your exact location. For example, it is usually 0.7

What wildlife can I see in South Georgia?

Many people take a cruise to South Georgia specifically with wildlife in mind, and for good reason. The area has rich and diverse bird life, not only for its huge king penguin colonies. Other birds that you may see when you travel to South Georgia in

How many people live in South Georgia?

South Georgia has no resident population. Throughout the year, the research station and governmental facilities are staffed from GSGSS and BAS. In the summer season, the numbers increase with staff from SGHT as well as science and government projects

South Georgia is a British overseas territory. The island was first sighted in 1675 by a London merchant, but it does not appear to have been explored until 1775, when it was claimed for the British. The area was primarily used during the 19th and 20

What unique features does South Georgia have?

Grytviken is surprisingly well-sheltered, and it has become a popular spot for couples that want a truly unique wedding. The highest peaks on the island are permanently covered in snow, and it is common to see icebergs in the water around South Georg

43 photos of South Georgia
in the gallery »

Temperatures during the winter months (around August) average around 0°C, usually going no lower than -10°C. During the summer (around January) temperatures average around 8°C. Since the weather can be quite variable your best bet is to bring layers. 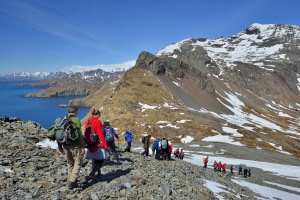 Take a South Georgia expedition cruise and prepare yourself to venture into a dense oasis of life in the midst of the cold Atlantic Ocean. 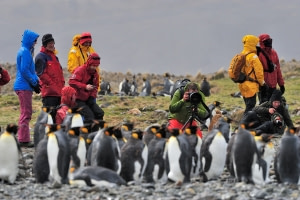 On your South Georgia cruise you’ll have a wide variety of activities through which you’ll get to introduce yourself to the wildlife – walks along the shore, extended hikes, diving for the experienced, wildlife watching… the list goes on.

You’ll get to meet a variety of seals, set eyes on a catalogue of birds,  and make friends with King penguins who just might investigate you up close and personal.