See the Earth the way it once was

Belonging to the Kingdom of Denmark but run independently, those who cruise to Greenland meet a world where European culture meshes with that of the Inuit in a harsh but beautiful landscape of ice, rock, and the sea. Greenland or “Kalaallit Nunaat” (“Land of the People") in the Greenlandic language is a place of extremes.

Greenland is dominated by the second largest ice-sheet of the world. Although huge in size it is inhabited by less than a 100.000 people. The majority of the Greenlandic population is formed by Inuit, the indigenous people of the Arctic.

Despite the restricted access to land due to the ice sheet Greenland sports a diverse array of wildlife. Many land mammals enjoy the northern and eastern shores of the island where human populations are few and far between. The waters around Greenland are alive with belugas, blues, fins, Greenland whales (a.k.a. bowhead whales), minkes, narwhals, and sperm whales.

Show cruise
Up to 4575 discount

HDS10X22 This special Arctic Odyssey is a once in a lifetime opportunity to sail from Spitsbergen to Northeast Greenland, Jan Mayen and back to Spitsbergen in a round trip. This voyage will offer all exciting facets of the what the Arctic world has in store for...

Show cruise
Up to 4760 discount

Northeast Greenland, Jan Mayen and Farthest North in the pack ice North of Spitsbergen in a round trip

HDS10C22 All Arctic highlights combined in a unique voyage to the remotest places in North Spitsbergen, Northeast Greenland and Jan Mayen. This voyage is aiming at the Farthest North coordinate in pack ice North of Spitsbergen.

We have a total of
18 cruises

On September 16th, I flew to Iceland and spent an evening in Reykjavik, then crossed the island for the town of Akureyri

Hondius begins her Arctic season, with other ships to follow

Overall rating based on 32 votes

Trip far exceeded our expectations. The expedition guides and the Doctor Moniek were very knowledgeable, patient, kind, and wonderful. We got to know them fairly well. it was hard to say goodbye at the end o

Fabulous trip Will use Oceanwide again

Trip of my husband's 60th birthday

I like everything specially the crew and the entusiasm of the guides.of corse, the place was wonderful. I hope to come again on bord in the future

It was amazing The icebergs, the scenery, the ship, the food, the staff and the people were amazing

Scenery is one thing. And for me the chief reason to visit Svalbard and Greenland. Others may focus more on wildlife. On this cruise the unexpected highlight was the great interaction between the passengers

Greenland is the world’s biggest island stretching approximately 2800 kilometres (1750 miles) from north to south. 85% of Greenland is covered in ice and is therefore white on the map.

What is the temperature and weather like in Greenland?

The size of Greenland creates a diverse range of temperature and climate conditions. For example, the populated sections of Greenland are all found on the coast because this area is free of ice. Meanwhile, the central region of Greenland is covered b

What will I see along the coastline of Greenland?

The surface of Greenland is dramatic and spectacular. Heavily indented with numerous fjords, the coast is formed by spectacular high mountains, 2000 meters (6500 feet) high cliffs and innumerable glaciers. The large glaciers produce the huge cathedra

What wildlife can I expect in Greenland?

A Greenland cruise may enable you to see a large variety of birds. There are about 52 bird species on the island. The number of land mammal species is relatively small, but it is still possible to see polar bears, Arctic hares, reindeer, musk o

Huge outlet glaciers slowly slide down the mountains towards the sea where the ice breaks of and creates the huge cathedral like icebergs that are so abundant in the Greenlandic waters.

What is the time in Greenland?

57 photos of Greenland
in the gallery »

Greenland: The Land and People

Fewer than 100,000 people call Greenland home, the majority of them Inuit – the indigenous people of the Arctic. Positioned northeast of Canada, Greenland is considered part of North America, though politically it has always been associated with Scandinavia.

Despite the mile-thick ice sheet that covers most of the island, Greenland is home to a variety of wildlife. Numerous land mammals reside along the northern and eastern shores, where human populations are scarce. The waters around Greenland are similarly rich with belugas, blues, fins, Greenland whales (bowheads), minkes, narwhals, and sperm whales. 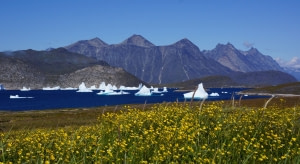 Greenland’s ice sheet is the only one of its size outside Antarctica. About a tenth of the Earth’s surface is covered in similar sheets, nearly all of which are concentrated in Greenland and the Antarctic Continent. As such, human centers of activity―even the capital of Nuuk―are chiefly located along the shore. It almost goes without saying, then, that there are no roads connecting the Greenland coasts. Travel there is done only by air and sea. 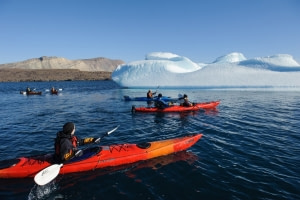 Those who join one of our cruises to Greenland, or Kalaallit Nunaat (Land of the People) as it is called in Greenlandic, encounter a country in which European and Inuit cultures intersect to create a world wholly its own. It is a severe but stunningly picturesque landscape of sprawling ice, towering rock, and limitless sky-blue sea. 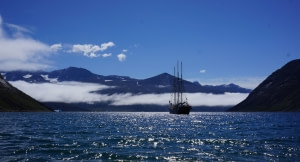 From the midnight sun to the northern lights, the great polar bear to the colossal blue whale, the full range of this mythic environment’s awe-inspiring attractions are possible on our many Greenland cruises. Our ice-strengthened cruise ships, Plancius and Ortelius, will provide you a comfortable home base from which to embark on daily expeditions, allowing you to dig deep into the Greenland experience. And if traditional sailing is more your speed, join us aboard our three-masted schooner, Rembrandt van Rijn.

Our Greenland expeditions afford you experiences that are truly once-in-a-lifetime: hiking the same trails as the Vikings hundreds of years ago, watching the many species of whale that visit the spirited Greenland coast, meeting the Inuit people and learning firsthand about their vibrant Thule ancestry―not to mention bird watching, polar diving, and kayaking opportunities also available when you explore this otherworldly Arctic island with us.

You can see the wide array of Greenland cruises we offer on our dedicated Greenland Cruise Page.