Explore the rugged beauty of an Arctic island chain

“Spitsbergen” is Dutch - spits meaning “pointed” and bergen meaning “mountains.” It was so named in 1596 by Dutch Arctic explorer Willem Barentsz. It took some time for the name to catch on – English whalers would refer to the archipelago as Greenland until the late 1780s. The Norwegian name is Svalbard.

Touched by three seas – The Norwegian Sea, the Greenland Sea, and the Arctic Ocean – Spitsbergen is the largest and only permanently populated island of the Svalbard archipelago of northern Norway.

Its rugged mountains and rolling tundra offer plenty of opportunities for hiking and snowshoeing. Spitsbergen is by far the largest wilderness area of Europe and offers some of the finest scenery and wildlife experiences in the world.

RVR23-22 The North Spitsbergen cruise sails to some of the remotest locations of northern Europe. The expedition gives you the opportunity to spot historic whaling remains, glaciers, a variety of Arctic birds including the Little Auk, and polar bears.

PLA03-22 Start your North Spitsbergen cruise with a trek around historic Longyearbyen, then join our expedition to the north of the island to take in the fantastically beautiful landscapes, the thousands of seabirds, and of course the star of the show, the polar...

HDS03-22 Start your North Spitsbergen cruise with a trek around historic Longyearbyen, then join our expedition to the north of the island to take in the fantastically beautiful landscapes, the thousands of seabirds, and of course the star of the show, the polar...

We have a total of
78 cruises

Sights and Sounds of Spitsbergen Aboard the New Hondius

Looking out over the pack ice after reaching 80 degrees north, this was the moment when I really felt like I was in the

Hondius begins her Arctic season, with other ships to follow

Overall rating based on 220 votes

excellent trip that met our expectations in terms of magical landscapes, interesting naturalistic observations and perfect organization (outings and stewardship). Wonderful cruise that leaves us with great m

Scenery is one thing. And for me the chief reason to visit Svalbard and Greenland. Others may focus more on wildlife. On this cruise the unexpected highlight was the great interaction between the passengers

Thank you for the great trip!

Thank you for the great trip!

Where do we go on Svalbard?

Svalbard is one of our core Arctic locations, a great place for enjoying wildlife, activities, and scenery. For this reason, there are too many areas we visit to list here. For details on intended routes and landing sites, see the Svalbard page at ou

What is the best time to travel to Spitsbergen?

When is the winter season in Spitsbergen?

The sun sets for the last time in Spitsbergen in mid-September and rises above the horizon again in mid-February. The winter landscape and temperatures prevail until May.

What is the temperature and weather like in Svalbard?

The weather in Spitsbergen differs per area and location. Although snow can occur throughout the year in Svalbard, the North Atlantic Current helps provide Svalbard with warmer temperatures than many other areas within similar latitudes. However

Where can I see polar bears during a Svalbard voyage?

As polar bears can travel great distances in a day, it is impossible to say where and when we will spot them. Sea ice is the best place to look, so we tend to focus our efforts there. Though you will have a good chance of seeing polar bears in Svalba

What wildlife can I see in Spitsbergen?

Your cruise to Spitsbergen will come with an enormous amount of opportunity to spot wildlife. Polar bears are obviously the main attraction regarding wildlife. There are six national parks throughout Spitsbergen, and Svalbard alone is known to c

73 photos of Svalbard
in the gallery »

Svalbard is located in the high Arctic and shares the Arctic’s designation as a technical desert when it comes to annual precipitation (or lack thereof). Particularly the eastern part of Svalbard sees relatively little precipitation annually. The west coast sees more precipitation in the form of rain and snow. Depending on when you take your Svalbard cruise you can expect temperatures to average anywhere from -14°C in the winter to 6°C in the summer. 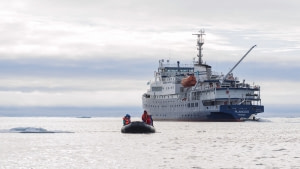 Travel to Svalbard and experience one of the Earth’s northernmost human inhabitations. Your Svalbard expedition cruise will take you to a beautifully stark landscape of glaciers and rugged snow-capped mountains. During your Svalbard holiday you’ll explore the preserved and protected history of the region, watch high Arctic wildlife on both land and at sea. Come during the late autumn/early winter months and your Svalbard cruise will be capped off by the great wonder of the Polar skies, the Northern Lights. For the polar bear enthusiasts special polar bear itineraries are arranged to offer the best polar bear experiences.