They were named, together with the South Shetland Islands, after the islands in northern Scotland by the Scottish sealers that frequented the area.

The islands were discovered only in 1821 when they were sighted by the respectively British and American sealers George Powell and Nathaniel Palmer. The islands consist mainly of rock and ice (85 % is glaciated), with little vegetation. Argentina and the United Kingdom have scientific stations on the islands, the Orcadas Station and Signy Station.

Cruises to the South Orkney Islands

We have a total of
10 cruises

The normal call of a humpback whale can be heard from miles away, and they often make noises that sound similar to cryin

The South Orkney Islands are frequently forgotten as an Antarctic travel option. But they shouldn’t be: Forming part of

Overall rating based on 13 votes

Although it's impossible to sum up our Oceanwide trip on Hondius from Ushuaia to The Falklands/Malvinas, South Georgia, South Orkneys, Elephant Island, South Shetlands and the Antarctic Peninsula below t

This trip fulfilled a lifetime dream for my spouse, Pat and I. We cannot say enough good things about Oceanwide Expedition's Leaders, Adam Turner and Sara Jenner.  These two individuals are extreme

excellent throughout we had a wonderful time and found all the staff helpful and knowledgeable . our cabin was very clean and comfortable and had all we required. the condition of the entire ship was really

One of the most amazing things I've ever done!

This trip to the Falkland Islands, South Georgia, and Antarctica was amazing! I honestly had no idea how fabulous it would be. I am so glad my mom suggested it! Our expedition leader, Ali, and her expedition

This 18-day expedition was an amazing, life-changing experience. Everything about it was more than I could have ever expected. The entire crew and expedition team were fantastic, the educational talks were v

What is the Temperature and Weather Like in the South Orkney Islands?

What Wildlife Can I See in the South Orkney Islands?

Bird enthusiasts will enjoy a visit to the South Orkney Islands because of the prevalence of penguins and seabirds. It is common to spot Gentoo, Adelie and Chinstrap penguins, and you may also see Snow petrels, Pintado petrels, Kelp gulls, Sheathbill

Who Owns the South Orkney Islands?

The South Orkney Islands are part of the Antarctic Treaty System, which means that they are not technically owned by any country. However, Argentina and the U.K. have both made claims upon these islands in the past. This region was first discovered b

What Unique Features Do the South Orkney Islands Have?

Coronation Island has the region’s highest point with Mount Nivea, which is located on Sunshine Glacier and stands 1,265 meters (4,050 feet) tall. This combined with the high percentage of glaciation and diverse mixture of seabirds and penguins

What equipment is needed to make photos of the solar eclipse, and do passengers have to bring that equipment themselves?

That depends on whether they only want eclipse photography or also pictures of wildlife and landscapes. Advise the passengers to look at the photography pages on our website. We avoid saying what specific equipment they might need, as this is very su

8 photos of South Orkney Islands
in the gallery »

The overall climate you’ll experience on your South Orkney Island expedition is cold, wet, and usually quite windy. During the summers (December through March) temperatures hover at just a little bit over 0°C.

During the winter (around July) the average temperature falls to around -10°C. 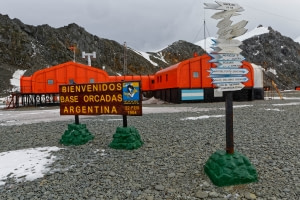 Facts about The South Orkney Islands

Travel to the South Orkney Islands

A trip including South Orkney Islands takes you into the heart of one of the most important breeding grounds in the world for Adélie and Chinstrap penguins. Your South Orkney Islands expedition affords you the chance to take in some incredible bird watching, say hello to a variety of seals, and make friends with the local penguin populations. 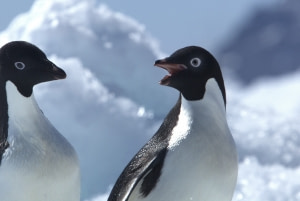