The largest of their species, southern elephant seals are often found in haul-outs along Antarctic coastlines

How do southern elephant seals hunt?

Male southern elephant seals tend to hunt along the continental shelf and forage on the ocean floor, while females hunt more in the open ocean.

Not having echolocation, southern elephant seals use sight and their vibrissae whiskers to sense nearby movement. Males return to the same areas every year to hunt, while females are more random.

To stay underwater so long, southern elephant seals exhale before diving to get gases out of their bodies. They would suffer oxygen decompression sickness if they did not, the same fate that can impact scuba divers.

To maintain oxygen levels, southern elephant seals store oxygen in hemoglobin and in their muscles. These seals have twice the volume of blood of land mammals of the same size, and their blood contains 50% more hemoglobin.

Southern elephant seals also slow their heartbeats from 50 - 120 beats a minute to 5 - 15 beats, restricting blood flow to the most vital organs.

Male southern elephant seals (bulls) fight for dominance over female harems and must continuously battle to maintain their rank.

Bulls may have to stay on land to defend their territories for months at a time, not even leaving to hunt. Battling elephant seal males use their weight and teeth against each other. Fatalities are rare, but the fights can leave bulls with severe cuts.

Southern elephant seals travel on their own while at sea.

Males usually don’t have enough muscle to become a dominant bull until they’re about nine years old. Southern elephant seal bulls arrive at the mating ground beaches in December through January, engaging in battles for dominance.

Bulls then establish harems out of the arriving females, which are usually between 30 and 100 strong depending on the social rank of the male.

Male southern elephant seals who fail in battle will wait at the edges of the colony, trying to sneak in quickie mating sessions with the females before the dominant bull chases them off. The highest ranking males may father up to 500 pups during their lifetime.

Pups are born about five days after the females arrive at the rookery. The babies weight around 32 kg (70 pounds) and will nurse for about 26 days.

Southern elephant seal mating occurs during the last few days of the nursing period, and pups are abruptly weaned off their mother’s milk when the mother heads back to sea. By this time, pups have quadrupled their weight to approximately 120 kg (265 pounds).

Pups lose about a third of this weight in the next eight weeks as they stay near the rookery, learning how to swim.

Female southern elephant seals live to be about 20 - 25 years old, with males generally only reach 15.

How many southern elephant seals are there today?

Once hunted nearly to extinction, conservation efforts have brought the southern elephant seal population back to roughly 740,000.

Do southern elephant seals have any predators?

Southern elephant seal pups are prey for sharks, leopard seals, and sea lions. Pups and adults can be attacked by orca whales.

HDS26-23 This Falkland Islands, South Georgia, and Antarctic Peninsula cruise is an animal-lover’s dream come true. The expedition explores one of the last untamed areas on Earth – a land of ruggedly beautiful landscapes and amazingly varied wildlife.

Show cruise
Up to 1250 discount

OTL26-23 This Antarctic Peninsula and South Shetland Islands cruise delivers you into a landscape of dark rugged rock, pure white snow, and a fantastic variety of wildlife. Come say hello to whales, seals, and thousands of penguins.

OTL27-23 Sail to the southern parts of the Antarctic Peninsula, Peter I Island, the Bellingshausen and Amundsen Seas into the Ross Sea. Visiting the Ross Ice-shelf, Dry Valleys, McMurdo Station, Macquarie Island, Campbell Island and the historic huts of Scott...

We have a total of
41 cruises 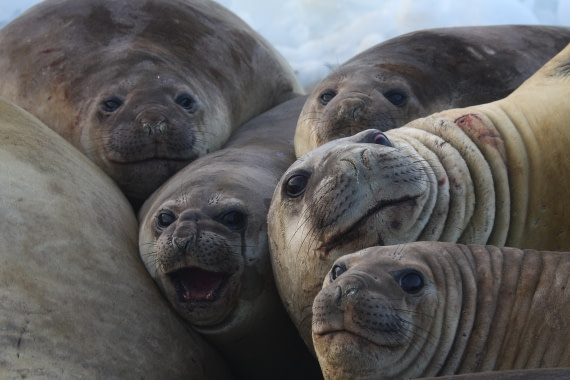