The largest, deepest-diving, and least interested in nests of all the penguins, these aptly named Aptenodytes are among the most coveted wildlife attractions in the Antarctic

Conservation status: Unknown according to IUCN

Diet: Main diet of fish, but also crustaceans and cephalopods

Appearance: Black heads and backs, white bellies with yellow trim around the neck

How do emperor penguins Hunt?

Emperor penguins hunt for fish and other marine life in the open seas or in cracks in the ice. They can dive to depths of almost 550 metres (1800 feet), staying underwater for almost 20 minutes at a time. To withstand the cold, emperor penguins reduce their metabolism and blood flow to non-essential organs. And to deal with water pressure during dives, penguins have evolved solid bones as opposed to the hollow ones common among flying birds.

Emperor penguins have been known to work together while foraging, and they share many behaviors with other species of Antarctic and sub-Antarctic penguin. While at sea, a group of penguins is known as a “raft.” On land, however, penguins form into vast colonies.

These colonies consist of thousands of members, with 5,000 being a conservative estimate and 10,000 being among the larger colonies. These colonies are referred to as “rookeries,” “waddles,” or “penguineries.”

During times of exposure to the harsh Antarctic winds, penguins form a huddled circle. The youngest members stay in the middle, where it’s warmest, while adults form the outer areas.

They slowly turn and rotate members in and out, somewhat like a radar image of a hurricane, taking turns being at the coldest outermost layer.

How fast can emperor penguins move?

On land, emperor penguins waddle at a speed of about 2.5 kph (1.55 mph). They can get going faster if they find a good slope, sliding down to the bottom on their bellies.

While swimming, emperor penguins usually move at speeds around 10 kph (6 mph), though they can reach about 15 kph (9.5 mph) if they need to get somewhere in a hurry.

Emperor penguins are the only penguin species that breeds during the Southern Hemisphere (austral) winter. They become sexually mature at three years of age. January through March is feeding season, and during this time, it is essential for adults to fatten up for the long stretches ahead where they will not be able to eat anything. Once April comes, emperor penguins start on their famous march to the breeding grounds. They usually have to travel at least 50 km (30 miles) and sometimes more than 150 km (95 miles) across the Antarctic environment.

Mating occurs in May. Male emperor penguins arrive slightly ahead of females, preparing to make their mating calls and displays of courtship. To woo the ladies, males push their bills to their chests, inhale, and give a call that lasts for about two seconds.

Once a couple has paired up, they stand still and extend their necks upward, staring at each other for several minutes. Once this ceremony is complete, emperor penguins are officially a couple and will waddle around the colony together. To start copulation, emperor penguins turn and bow deeply to each other.

They are serially monogamous, staying with one mate for the entire season but usually choosing a different mate the next season. Emperor females produce a single egg that weighs around 460 grams (1 pound). Once the egg is laid, males take over incubation, placing eggs on their feet and keeping them warm with their breeding patches (or brood patches) for two months non-stop. Males do not eat during this time, which means they go about 110 days without food, from the time they leave the breeding grounds until the time the eggs hatch. Emperor penguin males may lose as much as 20 kg (45 pounds) during this time. To conserve heat, they often huddle together in a mass with their backs to the wind.

By the time they lay eggs, emperor penguin females have exhausted their nutrition stores, so they immediately head back to sea to feed. They remain at sea for about two months, possibly not returning before the chick is hatched. Chicks hatch after about two months. At this point, chicks are without defense against the Antarctic environment and rely entirely on their parents for warmth and food. If emperor females have not returned from feeding yet, males feed their chicks with a substance they cough up from their esophagus.

Female emperor penguins return somewhere around the beginning of August, locating their families by familiar calls made by their male partners. Females then take over feeding the chicks and keeping them warm, and now it is the males that head to sea to feed. They remain at sea for just shy of a month. About a month and a half after being hatched, emperor chicks hop down from their parents’ feet and huddle together with other chicks in what’s called a “crèche.” Starting in November, chicks begin to grow protective feathers that replace their down, and the parents stop feeding them. The trek back to sea begins in December, at which point the breeding cycle starts all over again.

How long do emperor penguins live?

Emperor penguins live to be about 15-20 years old in the wild.

How many emperor penguins are there today?

A survey of satellite images from 2009 found 46 colonies containing 238,000 breeding pairs, suggesting a total of 595,000 individual emperor penguins. Since then, a further seven colonies have been discovered.

Do emperor penguins have any predators?

Emperor penguin chicks are preyed upon by other birds like southern giant petrels and south polar skua, while orcas and leopard seals are known to feed on adult emperor penguins.

OTL22-23 A true expedition, our Weddell Sea cruise sets out to explore the range of the Emperor Penguins near Snow Hill Island. We will visit the area via helicopter and see a variety of other birds and penguins including Adélies and Gentoos.

OTL23-23 A true expedition, our Weddell Sea cruise sets out to explore the range of the Emperor Penguins near Snow Hill Island. We will visit the area via helicopter and see a variety of other birds and penguins including Adélies and Gentoos.

This expansive voyage explores one of the most remote, scenic, wildlife-filled regions on Earth: the great Weddell Sea 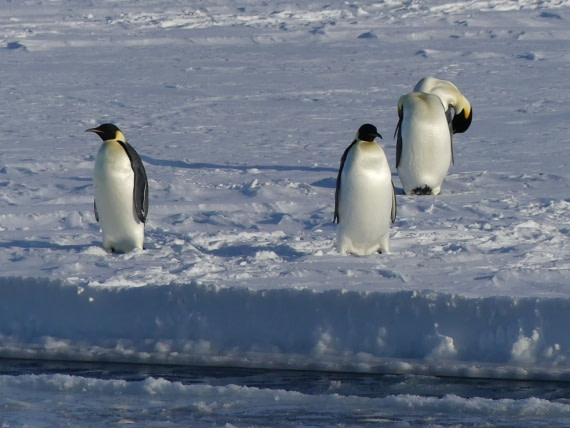 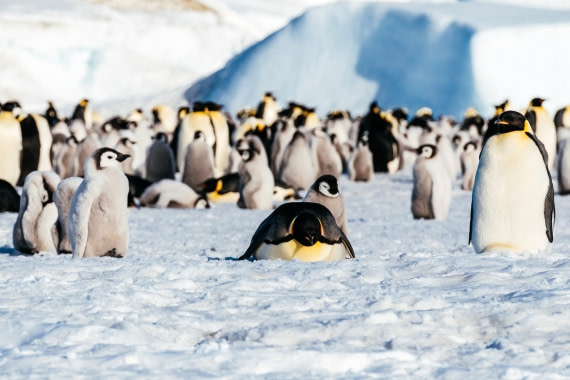 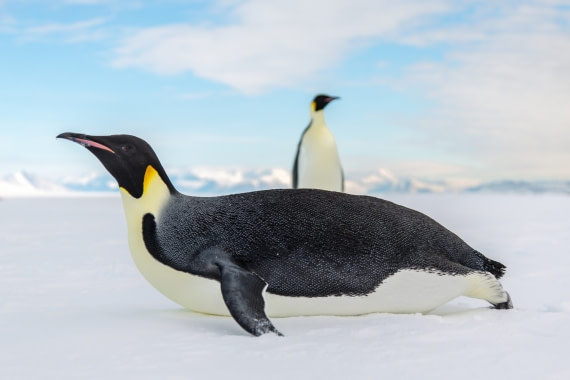