The only Antarctic bird to keep a year-round nest as long as the ice holds off, these neighbor-robbing homebodies are a welcome sight for sailors in search of land

Location: Southern hemisphere from New Zealand and southern end of South America down through the Antarctic.

Appearance: Blue, red, or purple ring around the eye (the skin around the eye is coloured, not the eye itself). White underparts, black backs and heads. Short black crest (during breeding season).

How do Blue-eyed Shags feed?

Blue-eyed Shags dive to a depth of 25 metres on average, with a maximum of 60 metres. They will fish together in groups that can number in the hundreds. These groups are known as “rafts” and are generally found close to shore. They aid each other by herding fish towards waiting fellow raft members.

They are able to stay underwater up to 4 minutes at a time.

Blue-eyed Shags form small colonies during breeding season, usually measuring no more than a few hundred members (as opposed to the millions some other birds can boast).

They will sometimes share breeding grounds with other species like Black-browed Albatrosses, Rock Shags, and Southern Rockhopper Penguins.

How fast do Blue-eyed Shags fly?

Blue-eyed Shags can fly up to 50 km per hour.

The breeding season begins in October through November.

Blue-eyed Shag pairs are monogamous. Nests are created out of grass and seaweed and kept together with a mortar of excrement and mud. The nests are rather built up, somewhat resembling a miniature volcano with the dip in the middle to accommodate the eggs.

The females will lay up to 5 eggs (usually 3). The incubation period takes about 5 weeks. Fledging occurs a little over a month after hatching.

How long do Blue-eyed Shags live?

How many Blue-eyed Shags are there today?

There are no real estimates for Blue-eyed Shag populations because scientists are still trying to pin down the exact taxonomy of the species. The roughest estimates put the worldwide population at over 20,000 individuals.

Do Blue-eyed Shags have any natural predators?

Blue-eyed Shag chicks and eggs are vulnerable to Sheathbills and Skuas and, depending on the location, rats. Adults can occasionally be taken at sea by Leopard Seals. 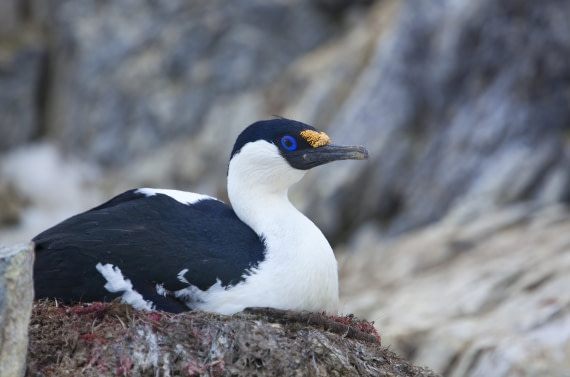 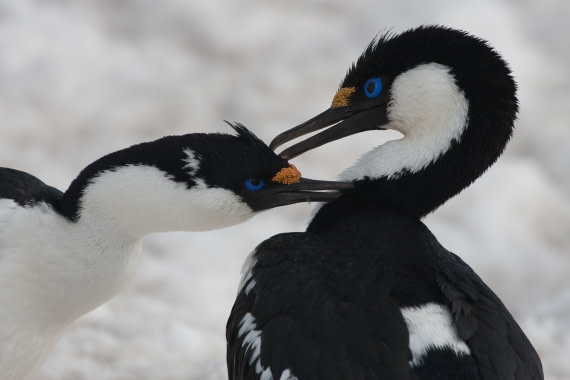 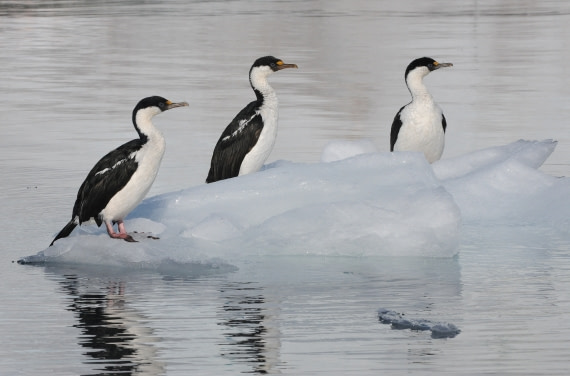