A channel at the northeastern end of the Antarctic Peninsula, the Antarctic Sound connects the Bransfield Strait to the Weddell Sea

Antarctic Sound is about 60 km long (37 miles) and at its narrowest less than 15 km wide (9 miles). Though logic suggests it was named for the location, it was in fact named after the vessel Otto Nordenskiöld used during his Swedish Antarctic Expedition of 1901 – 1904.

Antarctic Sound is nicknamed “Iceberg Alley,” as it is sometimes blocked by enormous tabular icebergs that bottleneck ship traffic to the Weddell Sea. These icebergs break off from the Ronne, Larsen, and Filchner ice shelves at the Weddell Sea’s southern edges. Antarctic Sound is a wild place, its cathedral-like icebergs and glaciated mountains of Trinity Peninsula imparting a distinct appearance unlike that of the northwestern Antarctic Peninsula.

The wildlife of Antarctic Sound is as rich as the landscape. Whales often frequent the sound, and at several locations along the coast sizable penguin rookeries can be seen. Antarctic Sound even houses one of the largest Adélie penguin colonies in Antarctica, located at Hope Bay. The rookery contains about 125,000 breeding pairs, but access to it is restricted.

The Argentine Settlement of Antarctic Sound

A large Argentine settlement and research station, Esperanza, is located at Hope Bay. About 80 people, including some families with children, live here in the settlement’s 40-odd buildings. It was at Esperanza that the first child was born in Antarctica, in 1978. The station is not often visited due to strict regulations. But another site, Brown Bluff, affords frequent landings on the Antarctic continent.

We have a total of
12 cruises 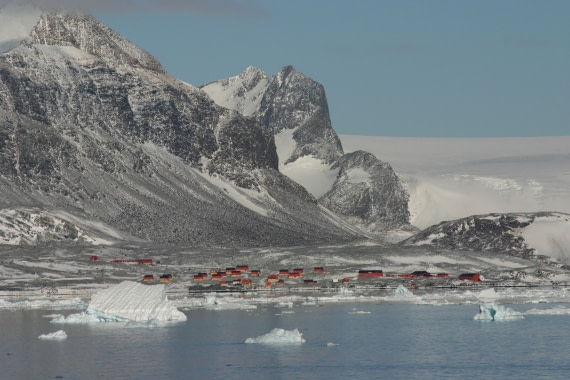