Think of Gold Harbour as a summary of South Georgia's wildlife and scenery gathered into one place. The location is regarded by many as the most beautiful location on South Georgia. King penguins, gentoos, and elephant seals are the major players in this all-natural amphitheater.

Gold Harbour is not as protected from the elements as Paradise Bay. Close to the southeastern tip of South Georgia, Gold Harbour lies at the foot of the Salvesen Mountains. Its coastline consists of a large beach and moraine sprouting with tussock grass. Adjacent to the coastline run the hanging ice cliffs of Bertrab Glacier.

While you’re here, don’t be surprised if you feel you’ve been dropped into the middle of a fence-less Antarctic zoo. The area is teeming with wildlife: 25,000 breeding pairs of king penguins, 300 gentoos, and numerous elephant seals crowd the beach from October to December―and sometimes during the summer.

The Amour of the Gold Harbour Albatross

Romance is as alive in the animal world as it is in ours. The courtship dance of the light-mantled sooty albatross can be seen around the cliffs near Gold Head―at the northwestern end of Gold Harbour―as the birds wheel through the sky in elegant synchronized flight. 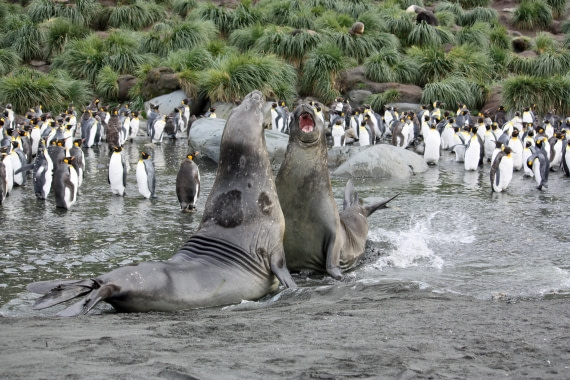