Akin to their blue whale relatives both in size and the low frequency of their song, these "razorbacks" have asymmetrically colored faces thought to help them while hunting

What do Fin Whales eat?

Like other baleen whales, the Fin Whale opens its mouth to swallow huge amounts of water – up to 70 cubic metres in the case of Fins. It then closes its mouth and forces the water back out through its baleens, trapping its prey like a sieve.

The Fin’s baleen plates can reach up to 75 cm in length and 30 cm wide, each spraying out into fine hairs. They will dive to depths as far as 200 metres, scooping up as much as 10 kg per gulp of the tiny creatures that are its food source.

Fin Whales spend about 3 hours a day in feeding themselves if food is abundant, consuming up to 1,800 kg.

If hunting schooling fish, they will swim in wide circles around the school, tightening the diameter of the circle with each pass in order to force the fish into a tight ball, which can then be easily scooped up.

Outside of breeding season, the Fin Whales’ social structure can vary depending on where in the world they are located. This may depend on scarcity of food or age ranges.

Fins have been observed solo, in pairs, and in pods of usually up to 6. However pods of much greater numbers, from 50 up to 300, have also been seen. These larger pods are usually seen during migrations.

How fast can Fin Whales swim?

Fin Whales can sustain speeds of around 35 km per hour. While feeding they swim around 10 km per hour. They can burst up to 45 km an hour.

Females can reach sexual maturity starting at 6 years old. They give birth every 3 to 4 years.

Actual breeding rituals have not been observed in the wild. The pregnancy lasts close to one full year. The calf is about 6 metres long and weighs between 2 to 3 tons. They will nurse for 6 months, doubling their length.

How long do Fin Whales live?

A Fin Whale in the wild can live to be 90 years old.

How many Fin Whales are there today?

The entire world population of Fin Whales is estimated to be around 100,000.

Do Fin Whales have any natural predators?

Killer Whales can sometimes successfully attack old or very young Fin Whales. However the adult Fins are amongst the fastest of the whale family and are hard to catch when healthy.

We have a total of
77 cruises 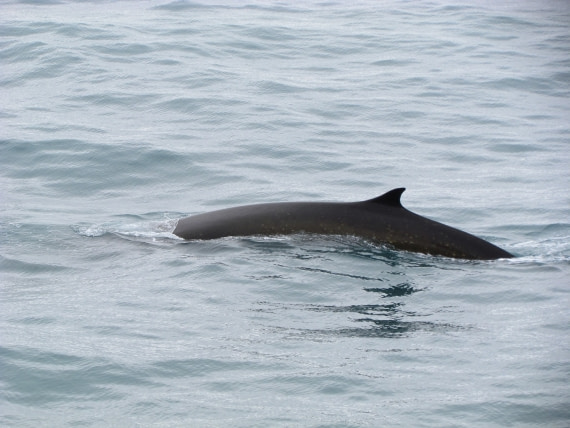