They may be Earth's most abundant large mammal, but their teeth are far from typical: They are perhaps the most precisely designed eating tool of any living carnivore

How do Crabeater Seals feed?

Crabeater Seals have a unique adaptation for feeding – they have evolved a sieve-like tooth structure that filter krill, somewhat like the baleens on Baleen Whales. They suck in water containing krill, close their jaws, and then force the water back out between their specialized teeth, trapping the krill inside. Krill make up to 95% of a Crabeater Seal’s diet.

The Crabeaters do most of their feeding at night. They can dive as deep as 430 meters although feeding dives are usually around 30 metres. The hunt can last up to 16 hours, involving hundreds of dives.

Crabeater Seals are probably the most sociable of the Antarctic seal families. When younger, they’ll gather together in groups that can number up to 1,000 hauled out together. As they grow older they become more prone to hunting alone or in much smaller groups of 3 or 4 individuals.

How fast can Crabeater Seals move?

Crabeater Seals reach sexual maturity starting at 3 years of age. Pregnancies last 11 months. Birthing season occurs from September through December. Unlike some other species, the Crabeater females will pull themselves out alone on the ice to give birth. An adult male (not the father) will attend to the mother and pup until about 2 weeks after the pup is weaned, at which point the female is ready for a new mating. When the pups are born they are about 120 cm long and weigh around 25kg. Nursing on their mother’s milk, they’ll gain around 4kg of weight every day until they’re weaned after only 2 or 3 weeks, at which point they’ll weigh nearly 100kg. The mother may have lost up to half of her own bodyweight by this point. The pups are born with a light brown down which they lose when they first moult at the time of their weaning. The light brown down is replaced with a darker brown fur that fades to a lighter shade on their bellies. This fur will lighten over time, resulting in the light grey fur sported by mature adults.

How long do Crabeater Seals live?

Crabeater Seals are known to live up to 40 years in the wild.

How many Crabeater Seals are there today?

Do Crabeater Seals have any natural predators?

Crabeater Seal pups are preyed upon by Leopard Seals. Both the young and adults are taken by Killer Whales.

We have a total of
54 cruises 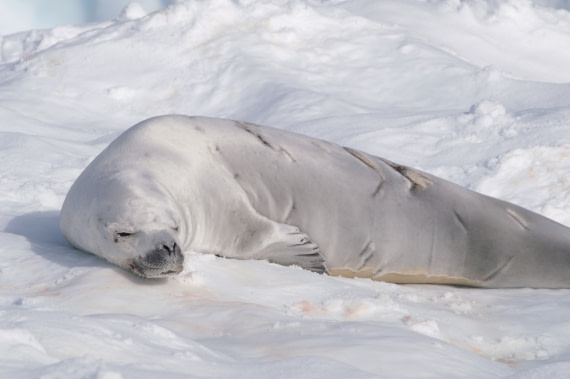