Third Time’s a Charm: The Last Voyage of Willem Barentsz

A Dutch cartographer and navigator, Barentsz lived from about 1550 to 1597 in the region that eventually became the Netherlands.

The Age of Exploration was a period of extensive European overseas discovery between the 15th and 17th centuries, and many of its expeditions are guidebooks in determination. Among the explorers who exemplify this determination most is Willem Barentsz.

A Dutch cartographer and navigator, Barentsz lived from about 1550 to 1597 in the region that eventually became the Netherlands.

He was born on the island of Terschelling, and his early map-making pursuits first took him south, where he completed a map of the Mediterranean. This map he co-published with the help of fellow Dutch-Flemish cartographer Petrus Plancius, whom we’ve written briefly about in our article on historic Antarctic maps. 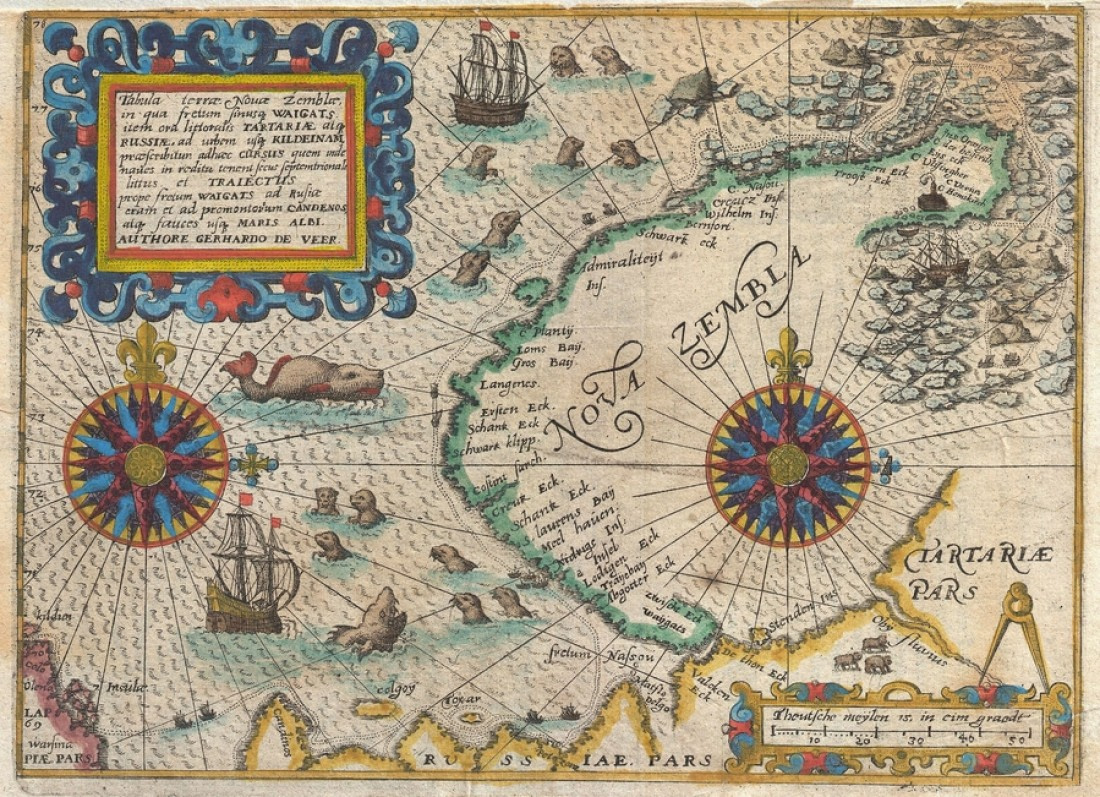 But Barentsz was destined for greater things and stranger shores. The bulk of his career would be devoted to discovering the Northeast Passage, a supposed sailing route that Europe’s leaders hoped would provide a safe trading link to China (then Cathay).

In his three expeditions to find this route, Barentsz eventually discovered Bear Island as well as an island group dearer to our hearts than any other: Spitsbergen, now also known as Svalbard. This is a brief summary of how it all happened and how it all ended.

Polar bears, walruses, and a whole lot of ice: the first voyage of Willem Barentsz

The early Dutch expeditions were subsidized by the States General of the Seventeen Provinces, imperial states that included the Netherlands and were ruled by the Spanish branch of the House of Hapsburg. Barentsz’s first voyage was no exception.

His small ship sailed from the island of Texels in 1594 with two other vessels, tasked with the mission of entering the Kara Sea and finding the Northeast Passage north of Siberia.

While near Kildin Island, Barentsz and his crew encountered a polar bear that tried to climb onto their ship. They shot it and later tried to capture it, but the animal proved too wild to keep on board, and they finished the job on Williams Island. 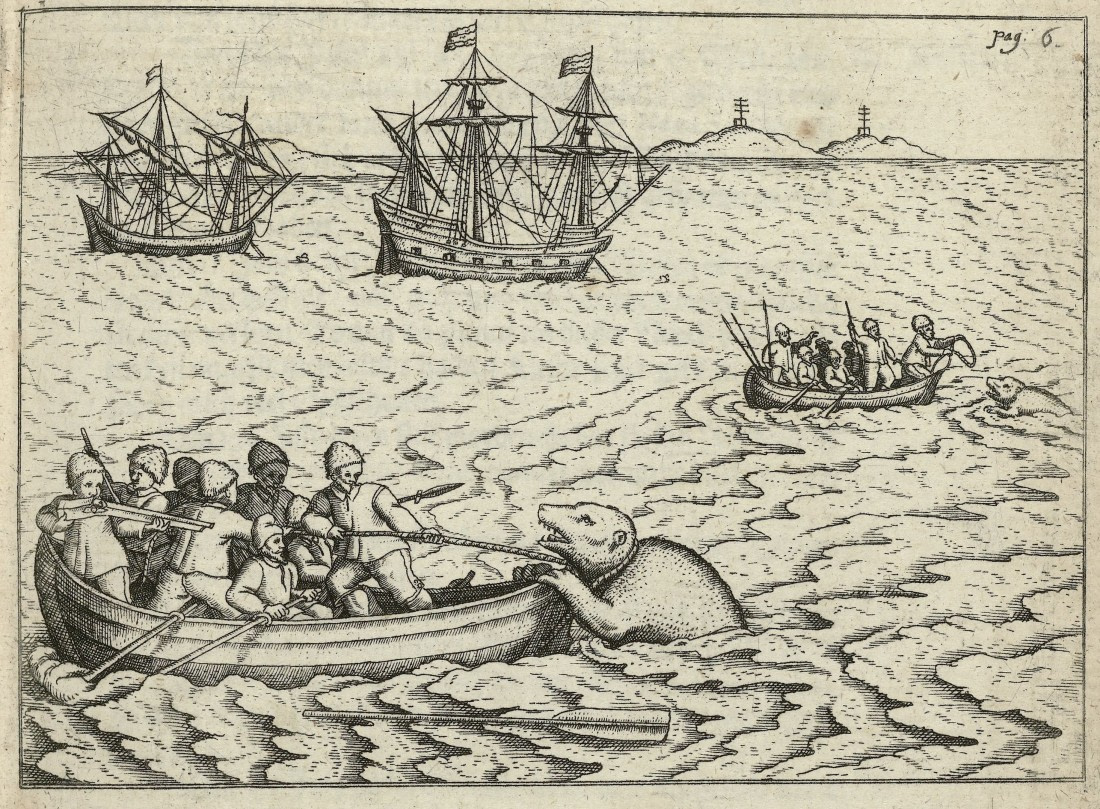 Later they encountered a herd of some 200 walruses. But when killing the tough creatures with pikes and hatchets became too difficult, they sailed on with only a few tusks.

The last event of this expedition was their arrival on the western shores of Novaya Zemlya (also Nova Zembla), at which point Barentsz and crew tried to sail northward along the coastline. But the thickening ice proved impassible, and they were forced to turn back home. 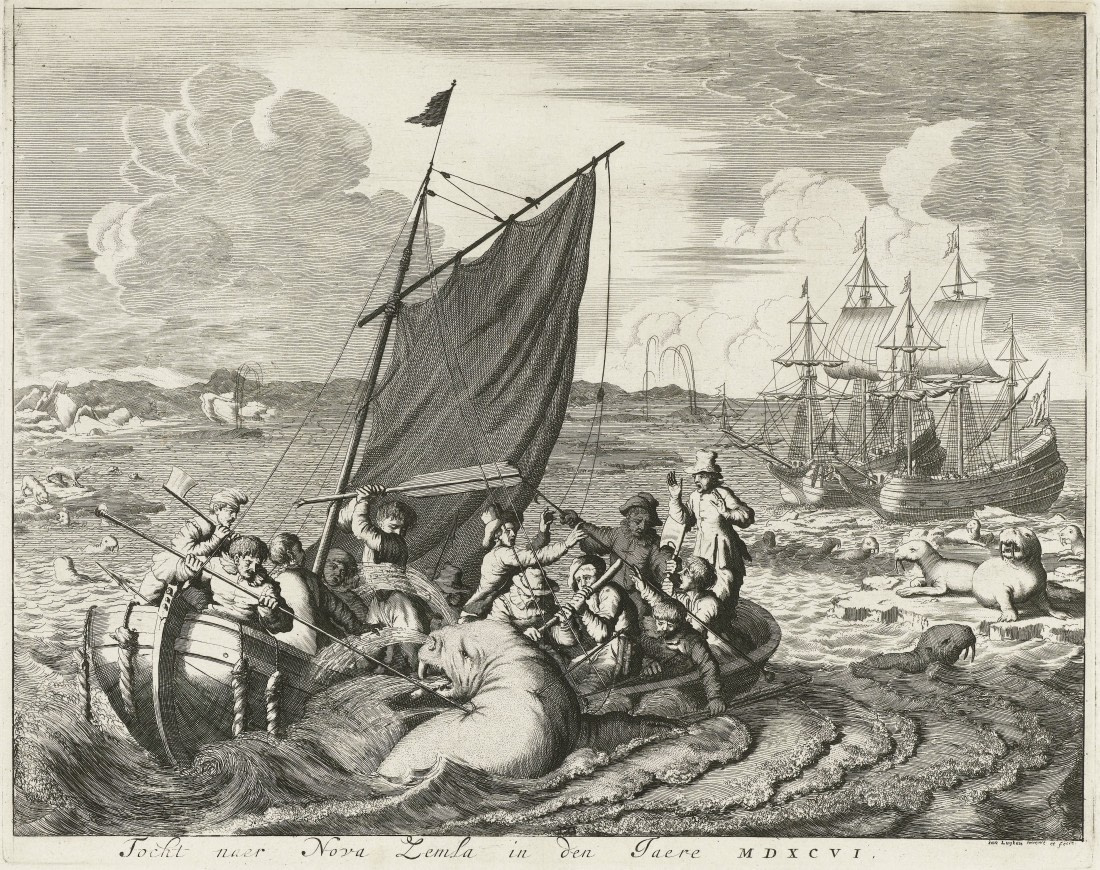 Despite the failure to find the Northeast Passage to China, Barentsz’s first expedition was viewed as successful – at least enough to warrant funding a second.

Only a year later, the Dutch stadtholder Prince Maurice of Orange made Barentsz the leader of another Northeast Passage expedition. With high hopes fueled by Barentsz’s previous voyage, he even sent six other ships with Barentsz, all of them laden with goods to trade.

This expedition embarked in June of 1595. Not quite two months later, Barentsz met 20 Samoyeds, a people that are part of the Uralic language group of Northern Eurasia, but whom to Barentsz and his crew were wild men. Nonetheless, the Samoyeds were able to communicate with one of Barentsz’s crew, who also spoke their language. 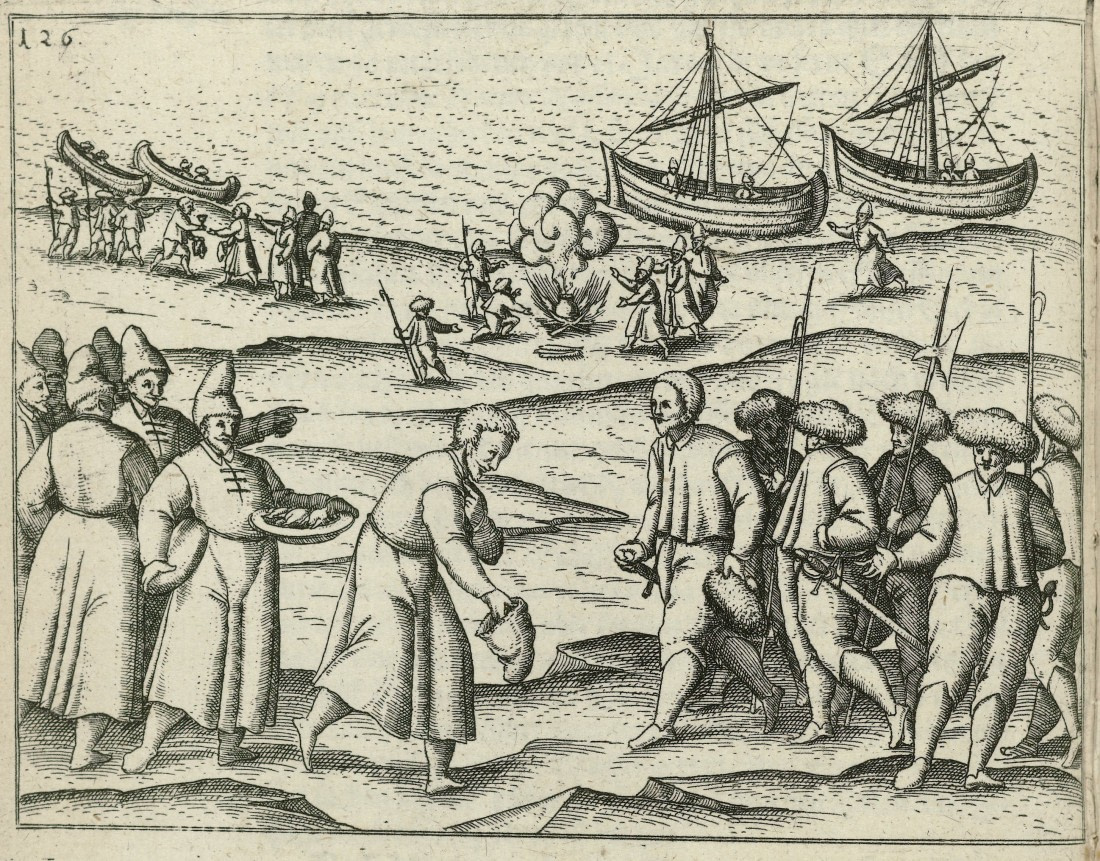 This luck did not prevent Barentsz from crossing paths with another polar bear, however, leading to two of his crew being killed while searching for crystal on States Island.

Still further misfortune afflicted the party when they found the Kara Sea locked in pack ice, forcing them to return home empty-handed once again. Back in the Netherlands, Barentsz would not find his welcome as warm as the first time. 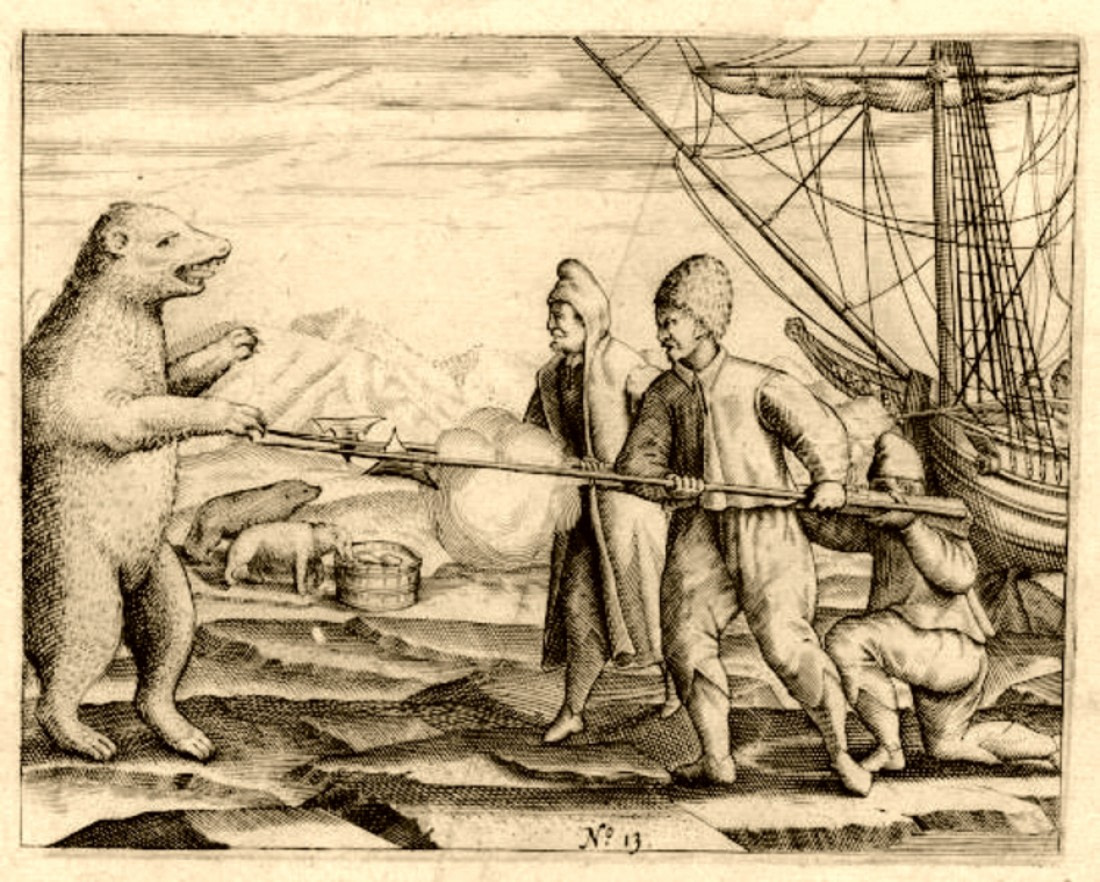 Due in part to the high cost and heavy disappointment of Barentsz’s second expedition, which was roundly viewed as a failure, the custom of subsidizing such voyages was ended. What replaced it was a reward system in which expeditions would be compensated only if they returned with proof of a successful navigation to China.

Barentsz was still determined to accomplish this, and the Town Council of Amsterdam was still willing to bankroll him. It purchased two small ships crewed with Dutch mariners, and in May Barentsz sailed east for the last time.

The expedition discovered Bear Island a month later. And though Barentsz did not know it yet, Bear Island is the southernmost landmass in the Spitsbergen / Svalbard archipelago, which would be his most famous discovery. 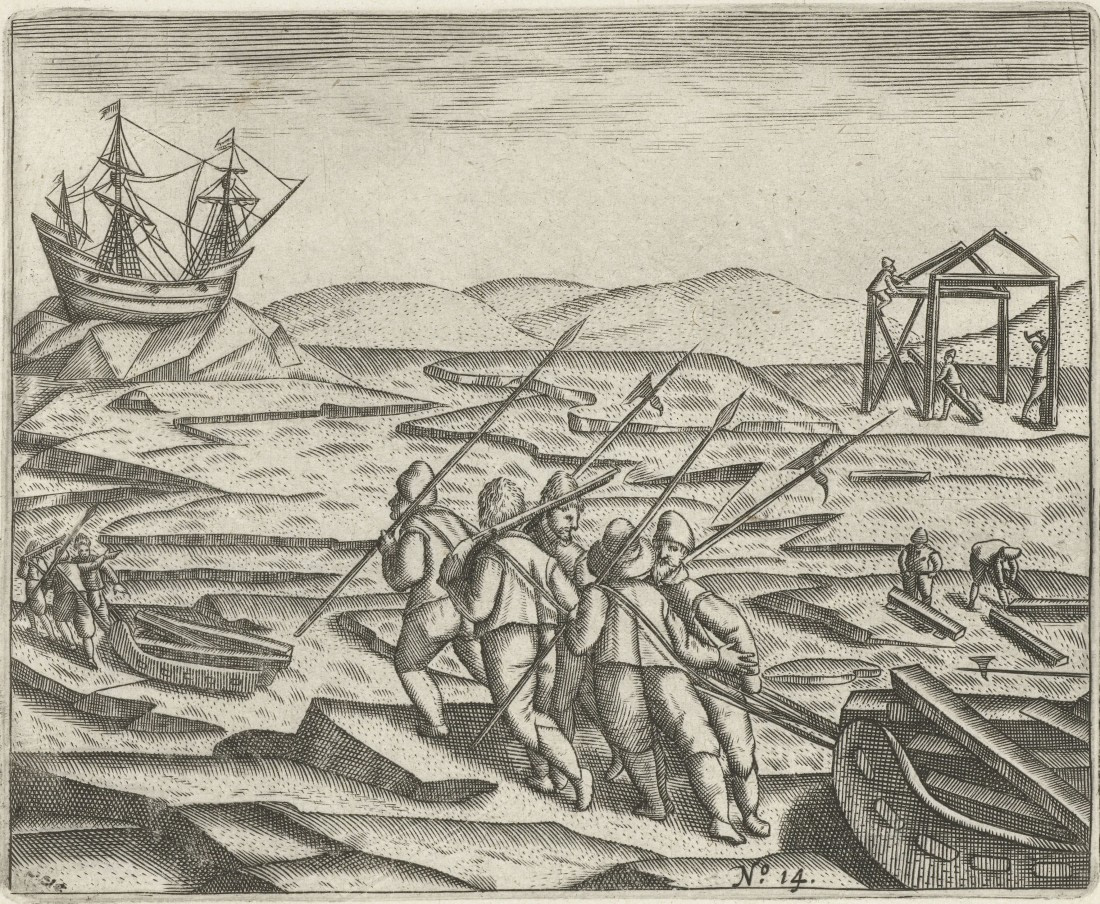 He made this discovery less than a week later, on June 17, when he and his crew saw the main island of Spitsbergen itself. They then discovered a series of bays and fjords in the area before returning to Bear Island on the first of July.

Then followed a debate between Barentsz and one of his captains about how best to proceed. They agreed to split up, with Barentsz continuing northeast while his captain went north.

But because of the thick ice, Barentsz was unable to enter the Vaigatch Strait as intended. He and his crew had to overwinter on Novaya Zemlya, building a hut out of wood from their ship. They called this Het Behouden Huys, the Saved House. 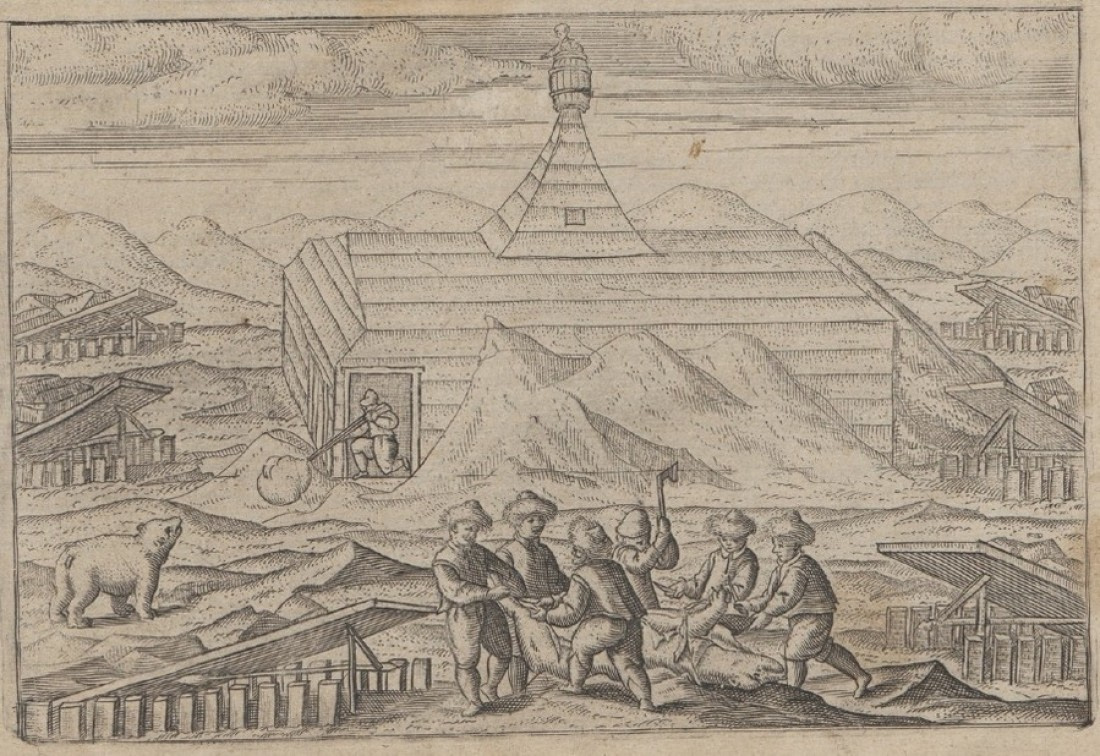 Even with the house, conditions on the island were brutal. It became so cold that Barentsz and his men had to sleep with warmed cannonballs under their bedding, and they had long since broken out their merchant goods to fashion extra clothes and blankets. 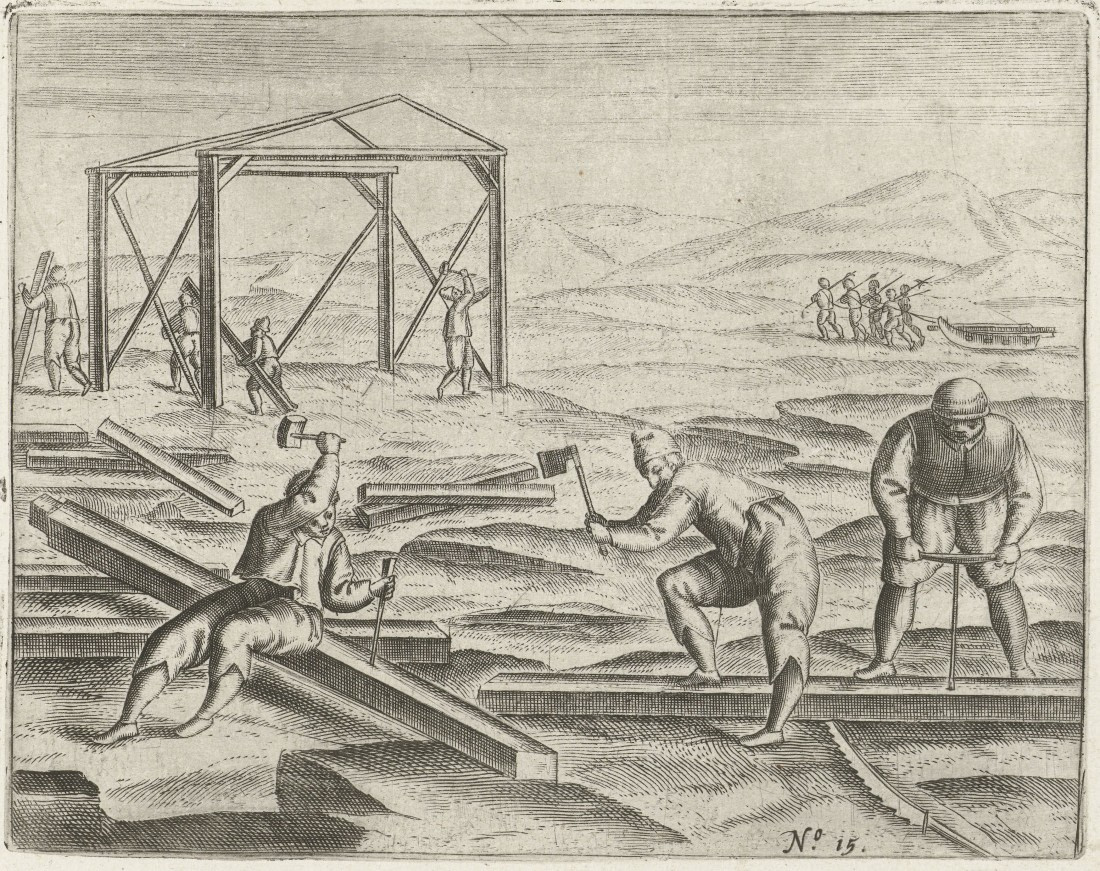 Though they were forced to ration food, especially bread and beer, they were able to hunt Arctic foxes and even a few polar bears. This did not, however, keep the explorers from slowly falling prey to exposure, malnutrition, and scurvy. 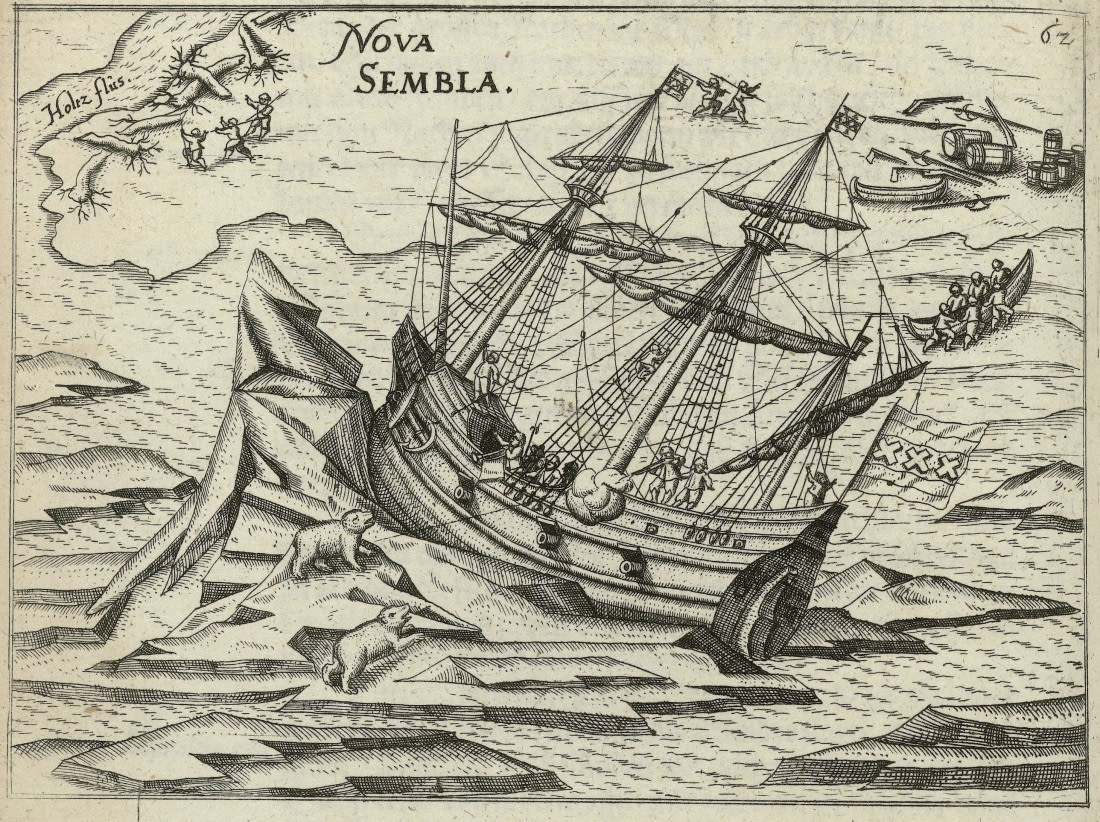 The following June, nearly a year after making camp on Novaya Zemlya, the ragged and starving survivors set out on two small boats, bound for the Kola Peninsula.

Barentsz never reached this destination. Dying from his ailments on June 20, 1597, only a week after leaving Novaya Zemlya, he still has no known grave. Scholars are not even sure whether he was buried on land or at sea. 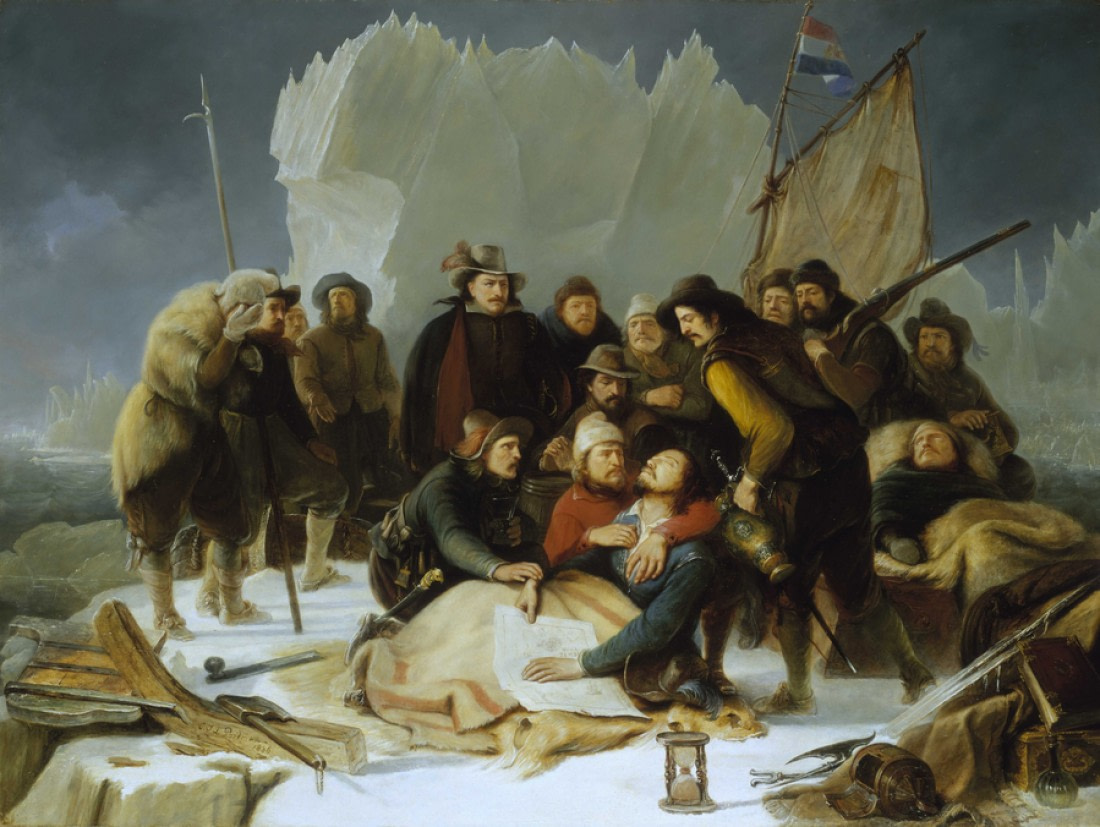 Seven weeks later, a Dutch merchant vessel captained by none other than Barentsz’s former captain rescued the 12 remaining crewmen. But it was not until November that the men finally returned to Amsterdam.

In addition to Barentsz, five sailors and one cabin boy perished in this final harrowing expedition for the Northeast Passage to China. The first successful crossing would not occur until Swedish explorer Adolf Erik Nordenskiöld made the route between 1878 and 1879. 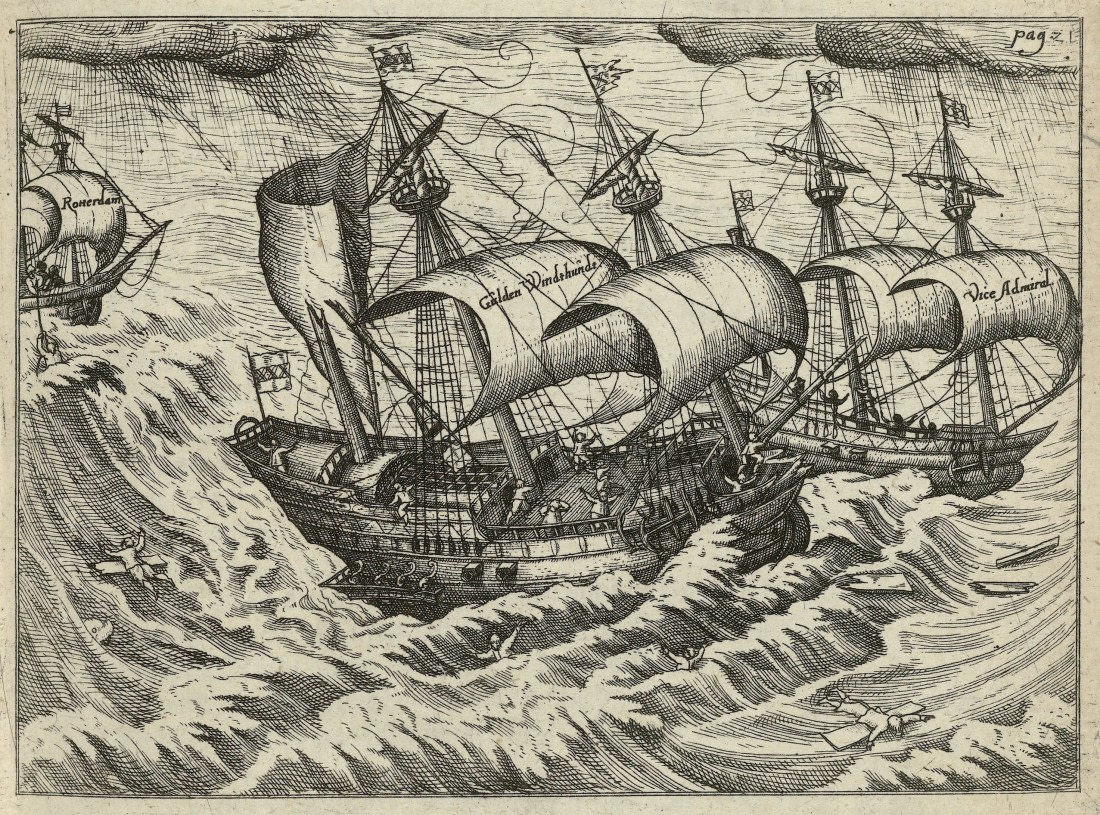 Aftermath and excavations of the Barentsz expedition

The Age of Exploration gave birth to near-countless tales of dangers faced, adversities overcome, and tragedies borne, but the final expedition of Willem Barentsz is among the most memorable.

Barentsz’s lodge on Novaya Zemlya was discovered in 1871, and a number of other expeditions to collect remnants and information were conducted in the following years. Today many of these objects can be seen in the Rijksmuseum in Amsterdam, which supplied all of the unattributed images in this article. 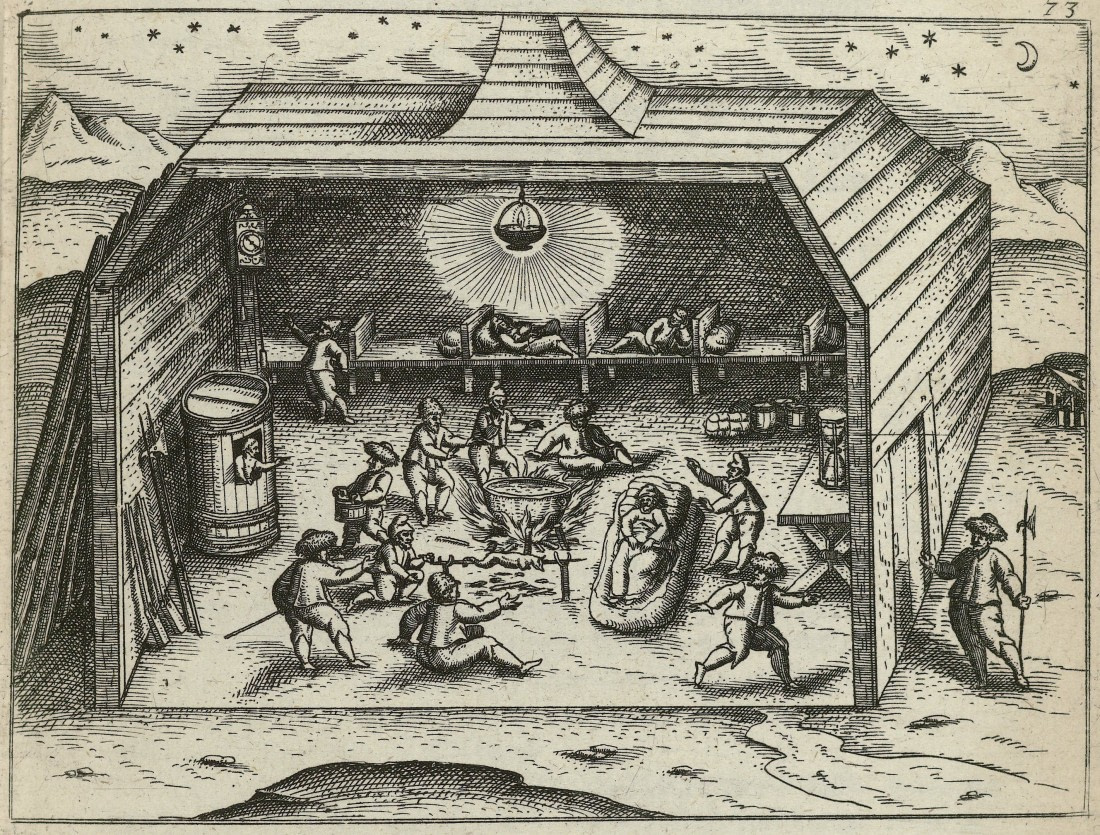 Two crewmen from the voyage also published their journals, and in 1853 the Murmean Sea was renamed the Barents Sea to commemorate the famed explorer. The Barents Region, Barents Island, and Svalbard’s second-largest town, Barentsburg, also honor him.

Other Barentsz namesakes include the Maritime Institute Willem Barentsz on his home island of Terschelling, a play written about his final voyage, a 2011 Dutch movie on the same topic, and even a Barentsz protein in the molecular makeup of the fruit fly. 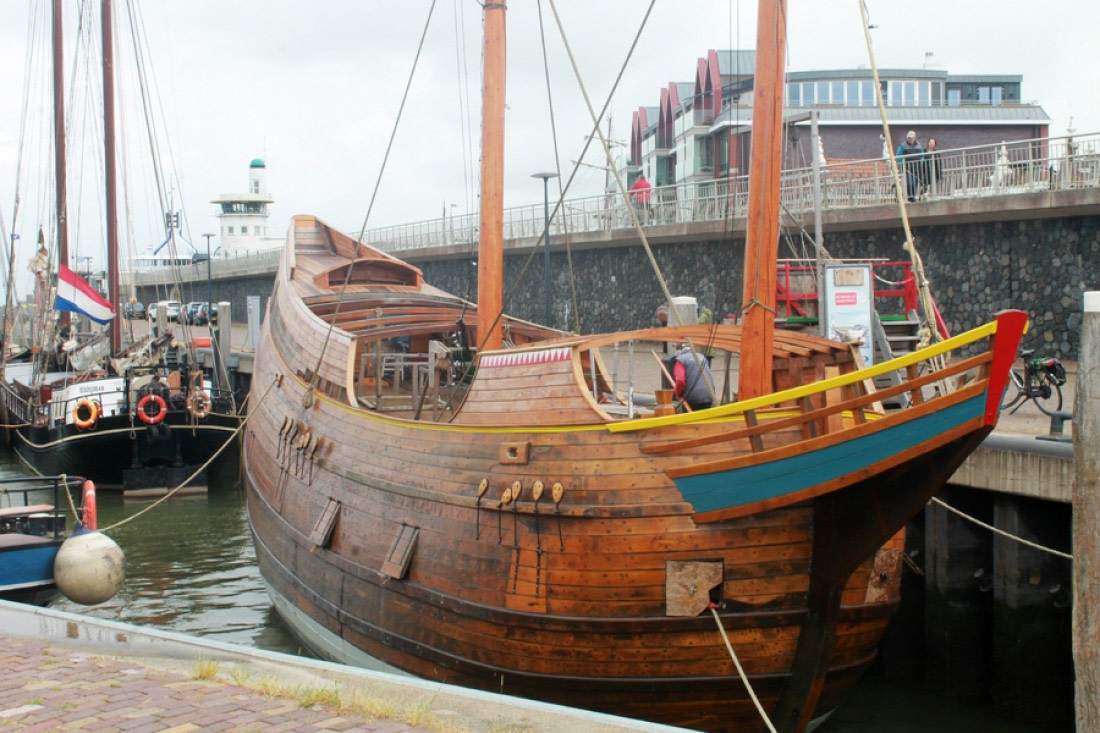 Recently, we also wrote about a shipbuilding project by volunteers in the Dutch town of Harlingen to craft a replica of De Witte Swaen (The White Swan), the vessel Barentsz sailed in his final expedition. This team is even using 16th-century shipbuilding methods and hopes to finish the vessel in 2020, after which they plan to retrace Barentsz’s voyage.

Such endeavors testify to the enduring legend of Willem Barentsz and his expeditions. Though these voyages were motivated primarily by trade, they nevertheless provide us tales of adventure and exploration that thrill the imagination to this day.

It is out of love for providing our guests the safer side of this adventure and exploration that we at Oceanwide Expeditions cannot wait to return to doing what we do best. 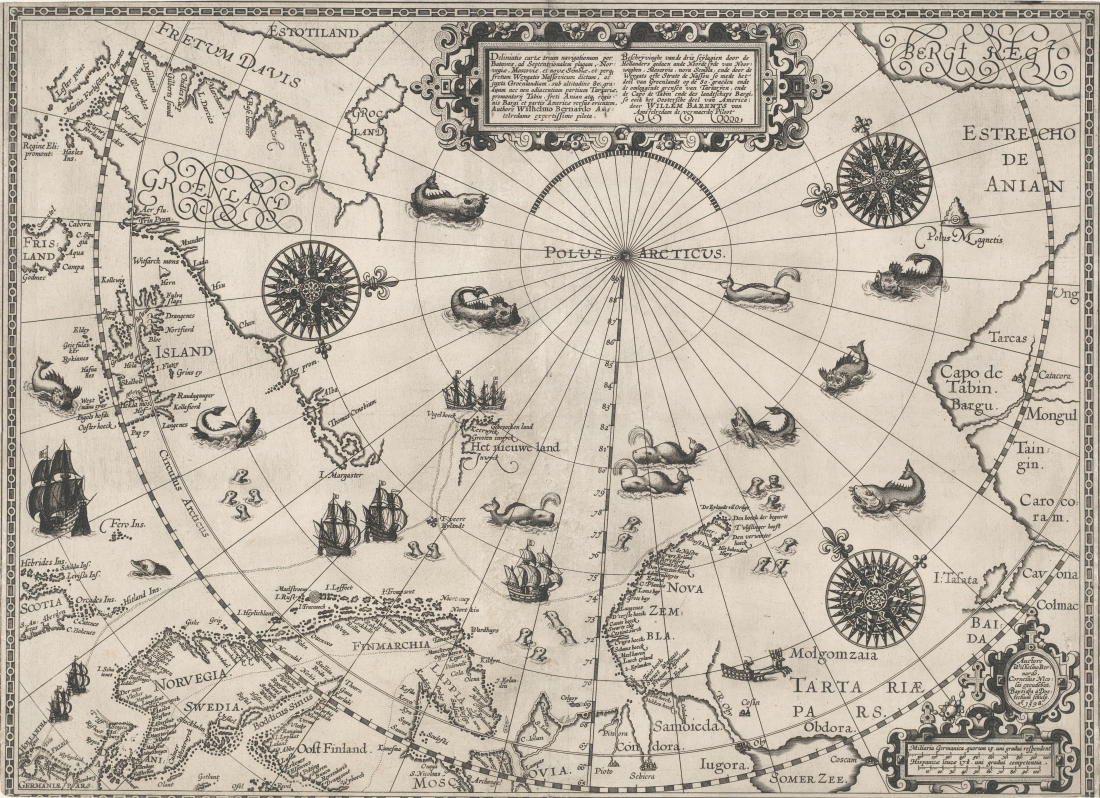 Experience the shores, seas, and lights of the Norwegian Arctic

RVR12-21 During this trip, hikes (with snowshoes if needed) and kayak outings with TRAK kayaks are offered. Snowshoeing is easy and for anyone with good health