These dorsal-less sailors know when it's time to take a load off, occasionally holding their back flippers in the air and letting the wind push them through the water

Appearance: Dark grey or black, sometimes with white patches on the underside.

How do Southern Right Whales feed?

Southern Right Whales are a member of the baleen whale family. Many baleen whales will take in large amounts of water then strain it back out through specialized plates in their mouths known as “baleens.” The krill are trapped inside by the baleen and then are swallowed.

However Southern Right Whales are different in that they are skimmers – they swim through clouds of krill with their mouths open, removing the krill from the water as they pass.

Southern Right Whales are quite curious and playful when it comes to being around humans. They have been known to try to give boaters and kayak rides on their backs. They’re also known to happily interact with Dolphins and Humpback Whales.

Southern Right Whales are slow movers, swimming around 5km per hour on average.

Southern Right Whale females become sexually mature around the age of 9 years old. They will give birth every 3 to 4 years. The breeding season lasts from the middle of July through August.

The female will become surrounded by amorous males. She will roll onto her back to keep her genitals up out of the water and out of the reach of the males until she is ready. This is not always so successful since the male’s penis is 12 feet long and maneuverable.

The males, while not outright fighting, will push and shove each other around to gain access to the female. When she is ready the female will give multiple males access. The males produce a gallon of sperm – enough to wash out that of the preceding males.

The pregnancy can last for over a full year. The calf weighs 1,500kg at birth.

Southern Right Whales are thought to live an average of 50 years in the wild, but data is scarce and there are examples of similar species of Whale living closer to 100 years.

How many Southern Right Whales are there today?

There are about 10,000 Southern Right Whales worldwide.

Do Southern Right Whales have any natural predators?

Southern Right Whales have been known to be attacked by Kelp Gulls off the coast of Patagonia. The Gulls do surprising amounts of damage with their beaks, leaving large wounds in the Whales’ skin. In addition to the injuries the Whales spend more time evading the Gulls meaning they have less time to feed their young. Southern Right Whale calves are also vulnerable to Killer Whales and Great White Sharks.

HDS26-23 This Falkland Islands, South Georgia, and Antarctic Peninsula cruise is an animal-lover’s dream come true. The expedition explores one of the last untamed areas on Earth – a land of ruggedly beautiful landscapes and amazingly varied wildlife.

PLA27-23 This Falkland Islands, South Georgia, and Antarctic Peninsula cruise is an animal-lover’s dream come true. The expedition explores one of the last untamed areas on Earth – a land of ruggedly beautiful landscapes and amazingly varied wildlife.

We have a total of
15 cruises 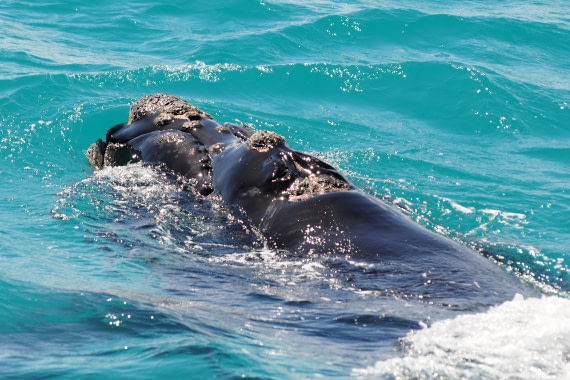