These "saddlebacks" are historically known as true ice enthusiasts, visiting the land mainly for breeding and spending the bulk of their lives at sea

Location: Atlantic side of the Arctic

How do Harp Seals hunt?

Harp Seals are extremely agile swimmers, able to catch a wide variety of fish and crustaceans. They can stay underwater for 15 minutes. Their thick coats of blubber not only keep them warm but also serve as a source of nutrition when food resources are thin. They have proportionally large eyes, giving it excellent vision. Underwater, its nostril slits close so it can’t smell anything, but this is made up for by the use of its vibrissae (whiskers) which are sensitive to touch and possibly to vibrations caused by the movement of prey. They are able to dive as deep as 270 metres.

Harp Seals are very social come mating season, forming huge colonies on land. They also often travel and hunt in large pods spaning from dozens to hundreds. They have a wide variety of calls, some for warning other seals off, others used to attract a mate.

Harp Seals migrate south when the winter months start rolling in. While males court females on land, the actual mating occurs in the water. Males fight for mating rights by biting and beating each other with their flippers. Dominant males will mate with several different females. The pregnancy lasts about 11 months, the pups being born around February. The pups, born with white fur, are about 11 kg in weight and around 80 centimetres in length. The nursing period only lasts about 10 days during which the mother does not feed herself and the pup grows quickly, fattening up to nearly 40 kg. The mother then abruptly leaves to commence mating, leaving the pup behind. The pup will become sedentary to conserve its stores of fat. They can lose up to half of their body weight during this period of 7 or 8 weeks, until they have learned to properly swim and hunt for themselves.

How long do Harp Seals live?

Harp Seals live about 20 years in the wild.

How many Harp Seals are there today?

Do Harp Seals have any predators?

Harp Seals are prey for Killer Whales, Sharks and Polar Bears. Before they learn to swim the pups are very vulnerable to Polar Bears. 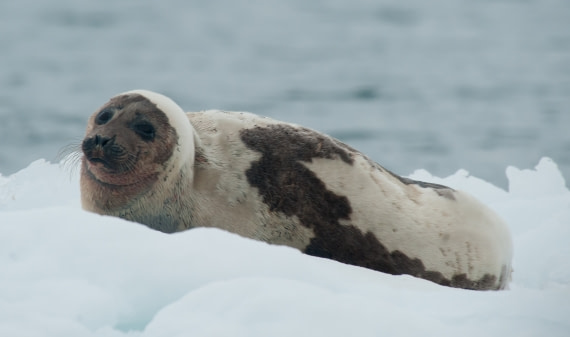