A wader most of the year but an ocean resident in winter, these hygienic birds have the waste-not-want-not habit of eating lice off the backs of whales

Appearance: Straight yellow bill with a black tip. Dark brown and black, red underparts and neck, white patches on face. Plumage changes during winter to a grey and white colourisation.

How do Grey Phalaropes feed?

Grey Phalaropes are mainly waders during most of the year, foraging in shallow waters. They will swim in small circles in order to create a bit of a whirlpool that sucks up insects and small crustaceans from the bottom of the water to where they can by plucked by the Phalarope’s bill.

Grey Phalaropes generally travel in flocks. During breeding season they will either breed in single pairs or in small colonies of over 20 pairs.

How fast do Grey Phalaropes move?

Grey Phalaropes can reach flight speeds of up to 25 km per hour.

Phalaropes reach sexual maturity as early as one year of age.

The Phalaropes’ breeding season occurs during June and July. The grounds are found next to Arctic tundra pools.

Unlike most species, the Grey Phalarope females are the ones who do the chasing of mates. They are also the ones who defend their nesting sites from other females, sometimes in quite an aggressive fashion. While not exclusive, breeding pairs will often team up again at the same breeding grounds in subsequent years.

Females build the nest in longish grass or other concealing vegetation. Once the 3 to 6 eggs are laid the females have two options.

If there are extra mate-less males available the female may build another nest, court another male, and lay another clutch of eggs.

The second option is that the female will depart from the breeding grounds, leaving the care of the eggs and chicks to the males. She will wing her way south on her migration to the south end of South America or the coasts of West Africa.

The incubation period lasts just shy of three weeks. The chicks are able to fend for themselves and fledge 18 or so days after hatching.

How long do Grey Phalaropes live?

Grey Phalaropes live up to 5 years.

How many Grey Phalaropes are there today?

Estimates place the Grey Phalarope population at between 1 million and 2 million individuals. This estimate is rough since no formal survey has ever been done.

Do Grey Phalaropes have any natural predators?

Grey Phalarope eggs and young are prey to Arctic Foxes. However the Phalaropes will often build their nesting sites somewhat near those of Arctic Terns or Ross’s Gulls which tend to chase away predators (something the smaller Grey Phalarope couldn’t hope to do on its own). 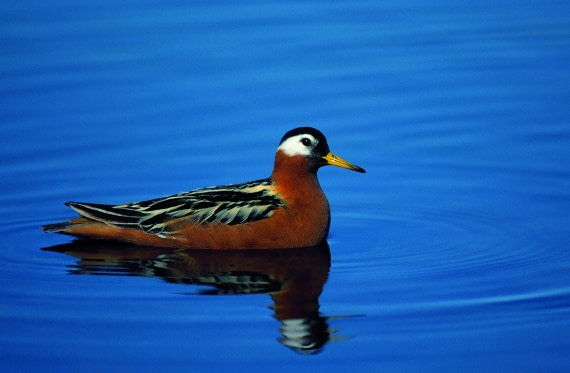