Stretching through the East Falkland waters south of Lafonia, Bleaker Island was once known as Long Island for its extended shape

Bleaker Island is 19 km long (11.8 miles) and only 1.5 km wide (almost a mile), dimensions that make for several lengthy beaches. One of these is the 2-km-long (1.2 miles) Sandy Beach, which contrasts sharply to the cliffs of Bleaker Island’s southwest coasts.

The Resident Naturalist of Bleaker Island

A notable resident of Bleaker Island was Arthur Cobb, who lived here from 1908 until the 1920s. Cobb was a passionate naturalist, keeping a record of events on the island that he later published. His name still lives on through the island’s lodge, which bears his name, as well as a bird species: Cobb’s wren (Troglodytes cobbi), endemic to the Falkland Islands.

The current owners of Bleaker Island run a small organic sheep farm, while part of the island has been declared a nature reserve and wild animal sanctuary. Some 79 species of flowering plant have been recorded on Bleaker Island, and the tussac grass offers a fine habitat for breeding birds.

The Bounteous Birds of Bleaker Island

Almost 40 bird species breed on Bleaker Island, which has been recognized by Birdlife International as an Important Bird Area. There is a large king cormorant colony (9,000 pairs) on the island, along with crested and striated caracaras, Falkland skuas, ruddy-headed geese, tussock birds, Magellanic snipes, black-throated finches, and dark-faced ground tyrants. Three species of penguins also can be found on Bleaker Island: gentoos, Magellanics, and rockhoppers. 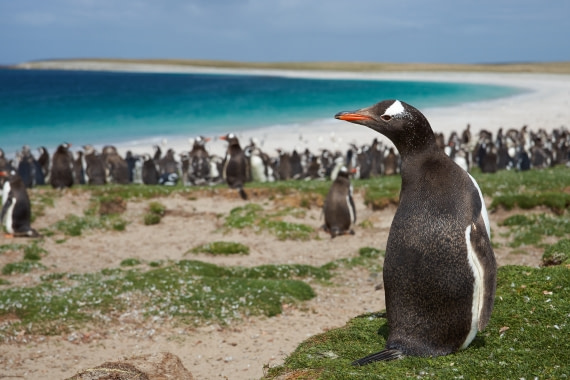