Scuba diving in Antarctica is a unique experience, no doubt about it. How many other places can you swim beneath icebergs and possibly see a penguin into the bargain? But that's not all Antarctic diving has to offer. There are shipwrecks, too. And with us, you can go wreck diving to one of them.

Wreck diving to the Guvernøren

Scuba diving in Antarctica is a unique experience, no doubt about it. How many other places can you swim beneath icebergs and possibly even see a penguin or leopard seal into the bargain? But that's not all Antarctic diving has to offer.

There are shipwrecks, too. And with us, you can go wreck diving to one of them - specifically, the Guvernøren, a Norwegian transport vessel with a very interesting story. 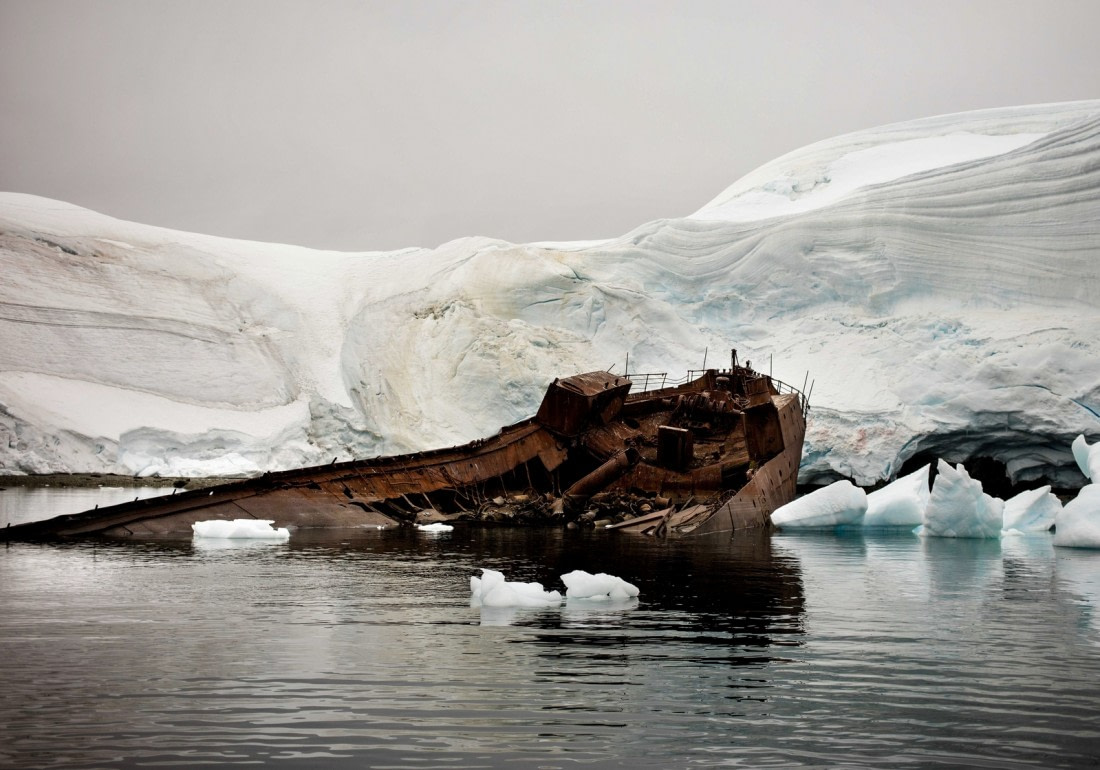 Wrecked remnants of the whaling industry

If you visit the Antarctic Peninsula, you may come across a variety of historical remains: an abandoned boat, a pile of whale bones, the snow-bleached hut of a famous expedition. Some of these remains speak of the massive whale hunts that had their heyday just over a hundred years ago.

At that time, the whaling industry was moving to the Southern Hemisphere. New technology, such as steam engines and exploding harpoon heads, made it possible for whalers to hunt the faster rorqual whales. Also, there was a high demand in Europe for oil, which was even used for glycerine in explosives during World War I. 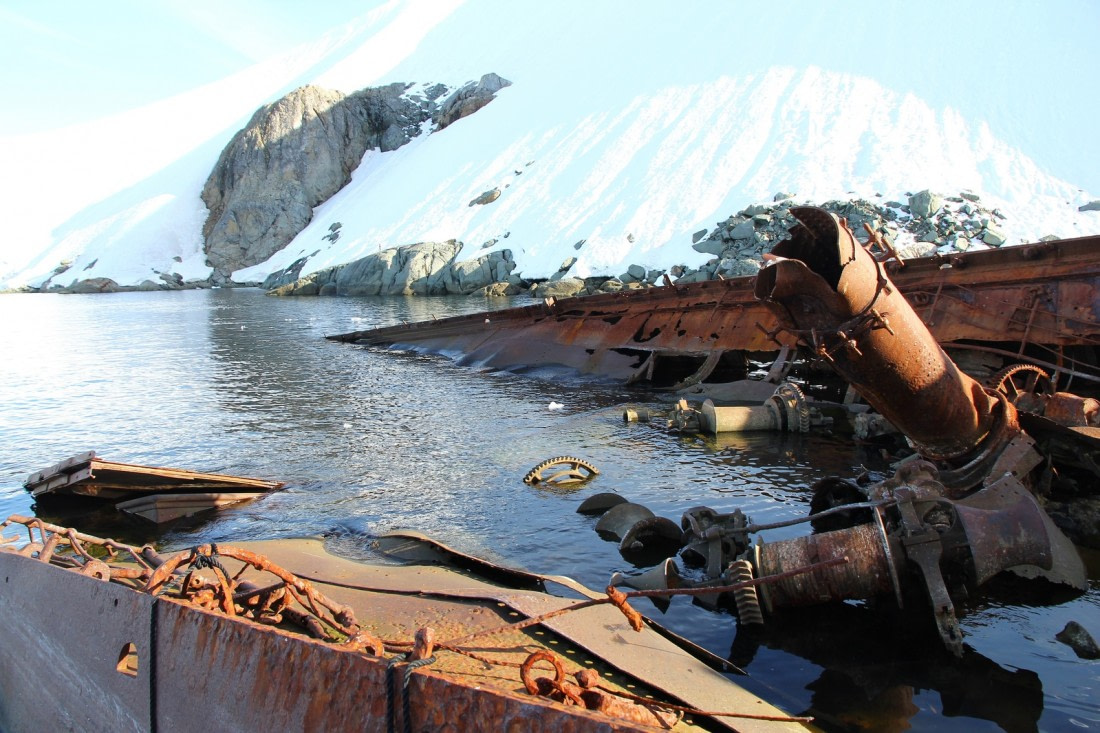 But life as a whaler was hard. They often worked two-year contracts and twelve-hour shifts. Their whaling ships used smaller ships, called catchers, for hunting. Larger ships, called factories, were used for processing the catch.

These factories could easily sail to where the supply was, but they did not need to abide by any of the shore regulations the landed stations had to follow. This, of course, made them highly lucrative. Such a ship was the Guvernøren. 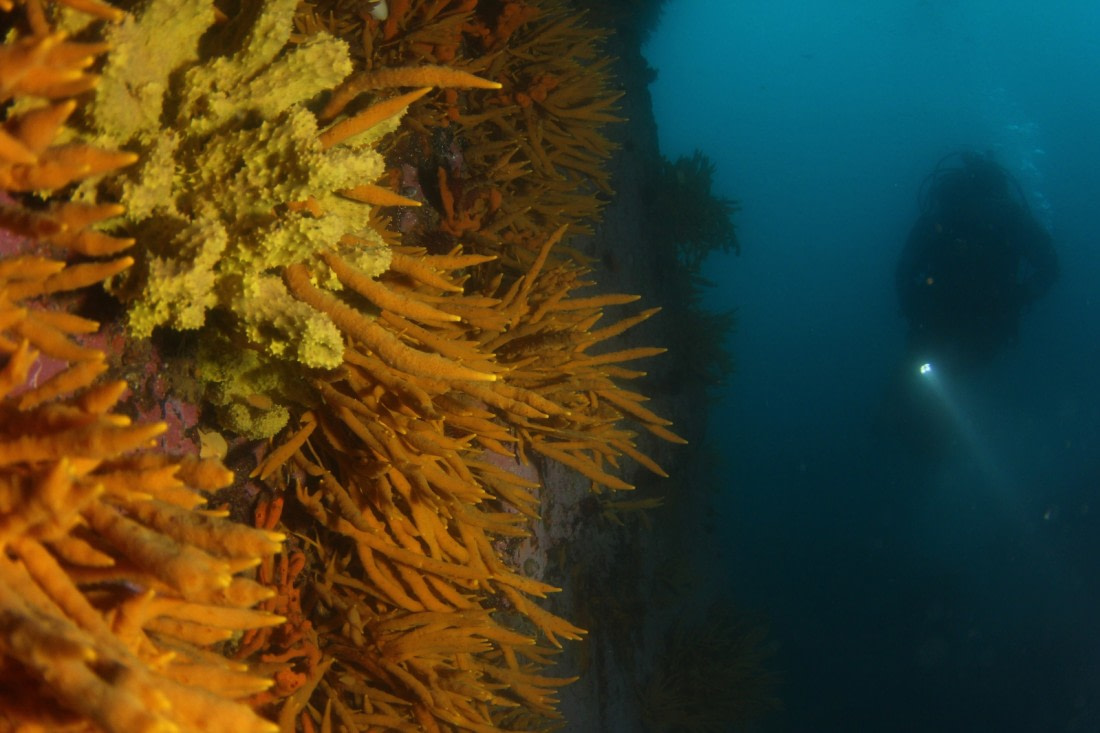 Wreck diving into a ship-load of stories

The Guvernøren has its own maritime lore. We know for a fact that she was a refitted cargo ship based in Wilhelmina Bay, which was known for its abundance of whales. We also know she had 16,614 barrels of whale oil on board when she caught fire on January 27, 1915.

One story says the crew were preparing to go home and decided to throw a party, celebrating a good whaling season. But when someone knocked a lamp over during the dancing, the vessel quickly caught fire.

This story remains to be verified, however, as does the story of the captain who supposedly ordered one of the whalers to shoot a harpoon into the Guvernøren to deliberately sink it in an attempt to save the oil. The crew of 85 got into their work boats and were later saved, and you can still see these boats abandoned on the nearby cliffs. 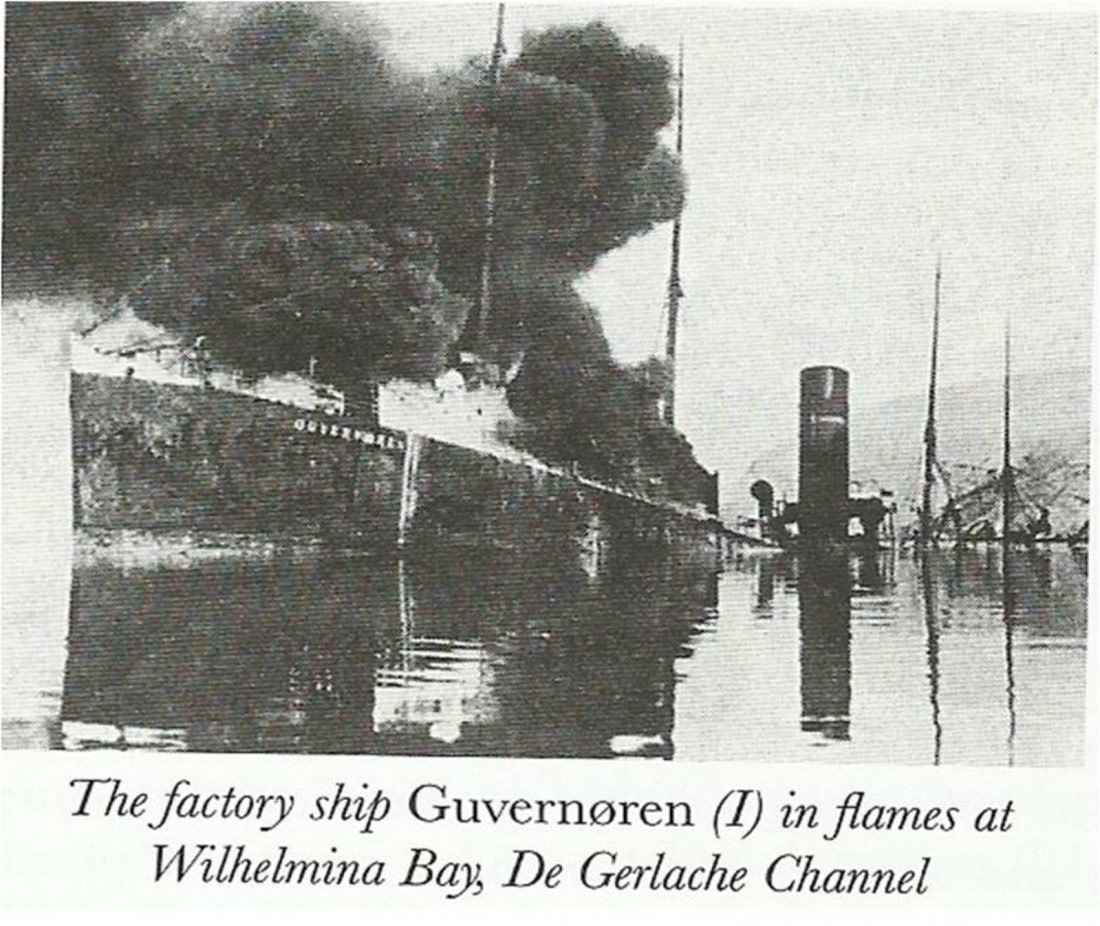 Whatever the story, the Guvernøren remains a great spot for wreck diving. The depths go from 1.5 meters (five feet) at the stern down to 17 meters (55 feet) at the aft. All 132 meters (433 feet) of the wreck between these points is full of preserved but rusty whaling history.

You can often make out the cookers for reducing whale blubber to oil. And in clear conditions, you can see barrels, capstans, wires, port holes, and even harpoon heads.

Antarctica above water means snow and glaciers, but underwater you are met with a multitude of colors: yellow corals, pink algae, red kelp, orange anemones. Wreck divers with an interest in photography will be kept busy a long time there. 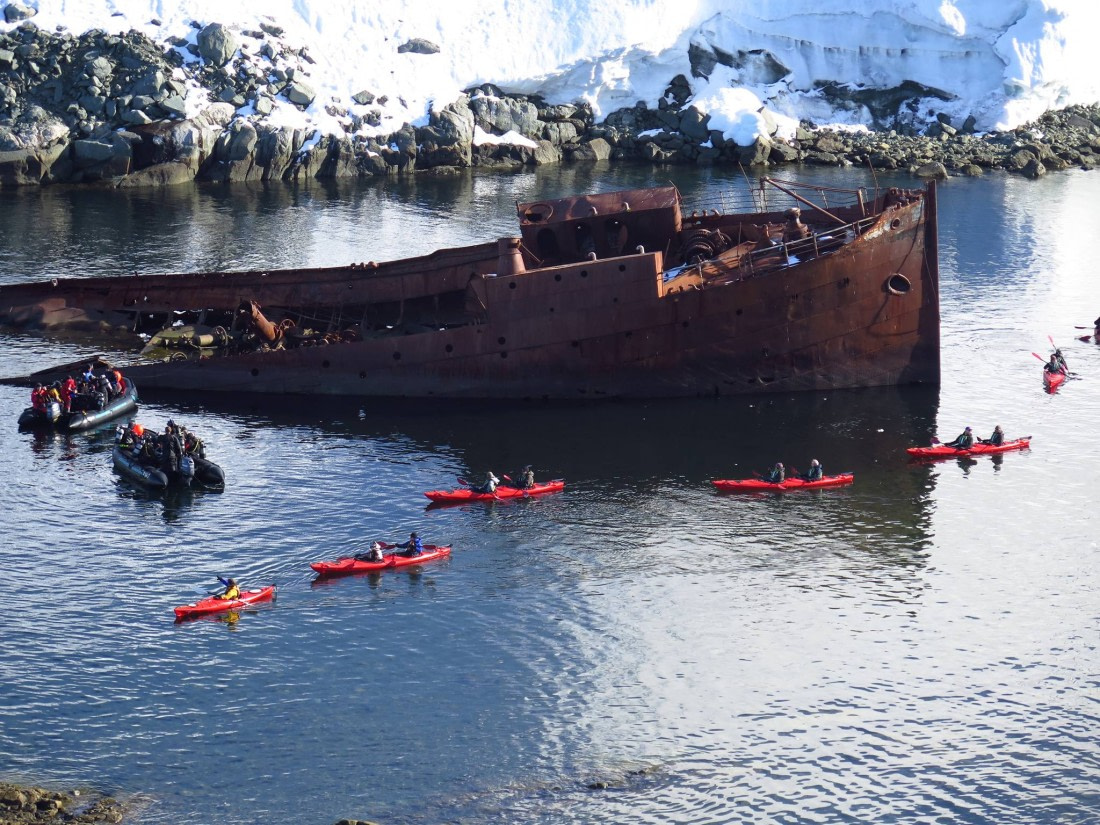 What to do when you're not wreck diving

This area makes for the ideal polar diving trip, but it's also great for non-divers.

The rusted, ghostly wreck of the Guvernøren stands out like a broken time capsule against the blue-white dazzlement of the Antarctic surroundings. You might see Antarctic terns perched on the ship's hull or fur seals lounging on the nearby rocks, and Wilhelmina Bay is also a splendid place for kayaking and Zodiac cruising. On our Basecamp trips, you may even have the chance to go mountaineering on the surrounding slopes of this scenic polar hotspot.

So in other words, you don't have to go wreck diving to enjoy your Antarctica cruise to the Guvernøren or its resting place. It just helps if you do. 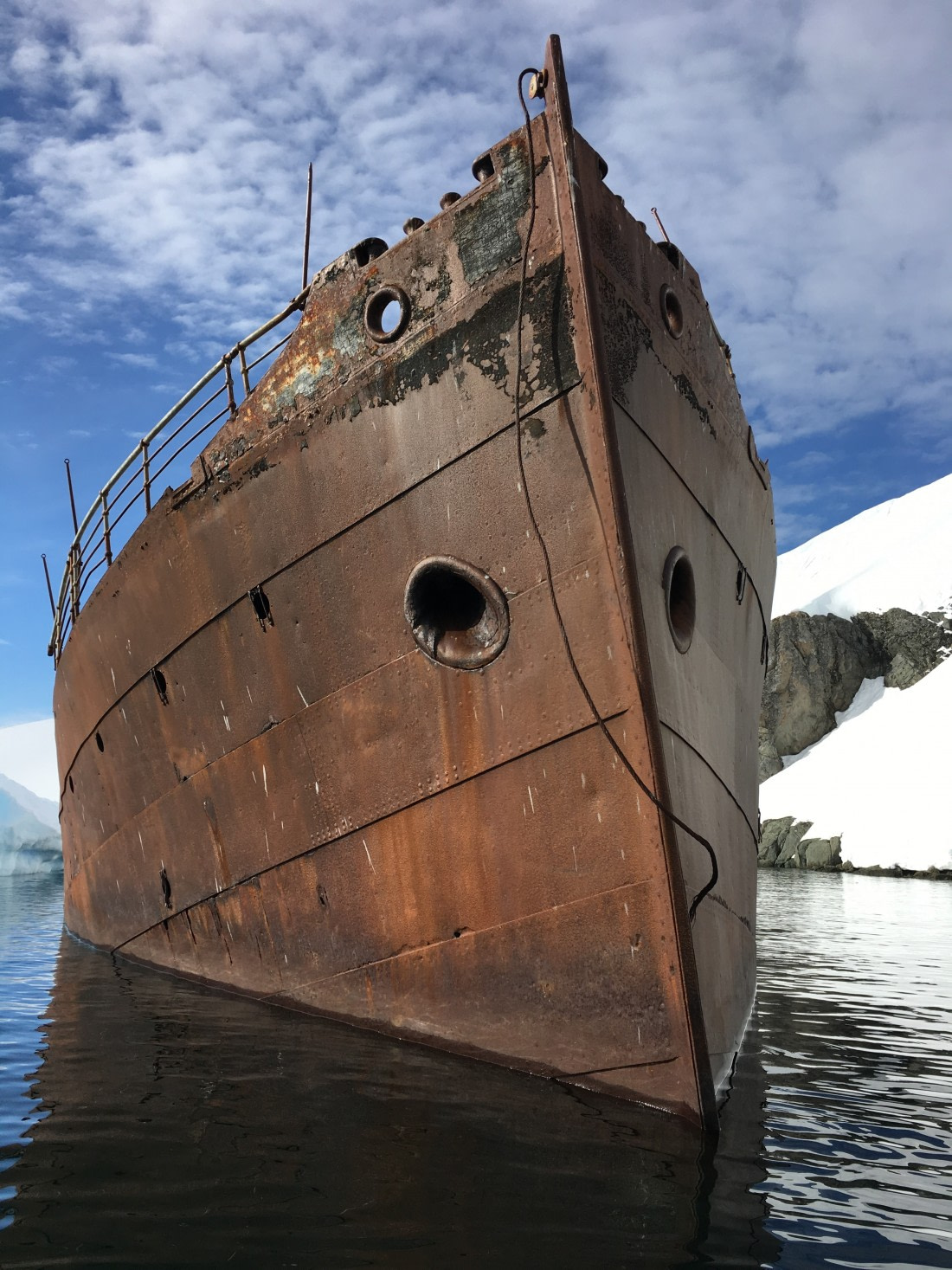 JNS26-22 This Falkland Islands, South Georgia, and Antarctic Peninsula cruise is an animal-lover’s dream come true. The expedition explores one of the last unt

PLA28-22 This Antarctic Peninsula and South Shetland Islands cruise delivers you into a landscape of dark rugged rock, pure white snow, and a fantastic variety

We have a total of
11 cruises