Horned on the head with what is in fact a large canine tooth, these beluga relatives were named for their cadaverous color

How do Narwhals feed?

During the winter Narwhals stay in shallower bay areas to feed almost exclusively on benthic fish, which are fish that live at the very bottom of a body of water (in this case, the bottom of the bays). During the Arctic summers they’ll move into open ocean water so their menu increases to include other kinds of fish like cod and halibut.

Narwhals dive as deep as 1,500 metres while fishing, staying underwater for up to 25 minutes. These dives, some of the deepest ever recorded for mammals, can be repeated up to 15 times a day. Since Narwhals don’t have well-developed teeth in their mouths they are thought to suck their prey in and swallow it whole.

Narwhals form different types of groups, ranging anywhere from 5 to 20 individuals. Some groups are of mothers and their young, others include bull males. During the summers these smaller groups may merge to form larger groups than can include 500 to over 1,000 whales.

How fast do Narwhals swim?

Narwhals have been known to swim up to 160 km per day while migrating. This averages out to about 6.5 km per hour.

Narwhal males become sexually mature around 12 years old, while females reach maturity much earlier at around 7 years old. The females will give birth once every three years on average. Mating season begins from April through May. Once impregnated, the gestation takes about 14 months, meaning the female does not give birth until around June of the following year. Only one calf is born. The calves are about 1.5 metres in length, with dark grey skin that will lighten as they get older. The calves will nurse on their mother’s fat-rich milk for the next 20 months.

How long do Narwhals live?

Narwhals live up to 50 years in the wild.

How many Narwhals are there today?

There are about 75,000 Narwhals alive today.

Do Narwhals have any natural predators?

Younger Narwhals are targeted by Polar Bears who wait near breathing holes found in sheets of ice. Narwhals are also prey to Killer Whales. Narwhals are also susceptible to getting trapped under the ice, especially if they wait too long to migrate before the Arctic winter closes off large stretches of water.

HDSXX23 Join our expedition to the north of Svalbard to take in the lovely landscapes and wonderful wildlife. We will attempt to land on Kvitøya, a site of historical significance, and home of a large walrus population.

RVR32-23 The Scoresby Sund cruise travels into the largest fjord system in the world. The expedition visits historic Inuit sites, sails through sensational scenery and tops it all off with a night-time sky filled with the Northern Lights.

HDS11-24 Join our expedition to the north of Svalbard to take in the lovely landscapes and wonderful wildlife. We will attempt to land on Kvitøya, a site of historical significance, and home of a large walrus population.

HDS11c24 Few Arctic cruises combine such a winning variety of wildlife and scenery. Joining our North Spitsbergen voyage (including Kvitøya and the 82nd parallel north) with our Spitsbergen-to-Greenland aurora borealis trip, this fantastic union of the Arctic’s... 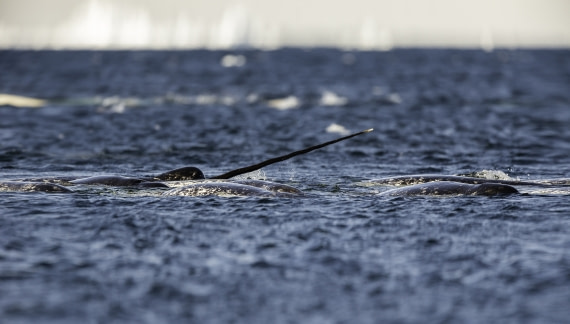