These "gold-mouthed" mollymawks live at sea but spend most of their lives in the air, protecting their title as world's fastest horizontal flier

Location: Circumpolar across the southern oceans.

Appearance: White body and chest. Light grey head, back, and tail feathers. Dark grey wings. White crest under the eye. Black bill with a golden outline along the top and bottom, hooking into a pinkish tip. White underwings with black forward edge.

How do Grey-headed Albatrosses feed?

Grey-headed Albatrosses generally feed in the open ocean (as opposed to over continental shelves). While they prefer to pluck food from just under the water’s surface they can also, on occasion, dive as deep as 7 metres.

They will fly long distances to feed, even during breeding season, sometimes making trips as long as 13,000 km.

Grey-headed Albatrosses tend to be solitary while at sea.

How fast do Grey-headed Albatrosses fly?

Grey-headed Albatrosses can fly at speeds reaching up to 127 km per hour.

Grey-headed Albatrosses create breeding colonies across the islands of the southern Oceans like South Georgia, Islas Diego Ramirez, Kerguelen Islands, and so on.

The cone-shaped nests are built on cliffs or steep slopes with grass and mud. A single egg is laid around the middle of October. The incubation period lasts about 70 days, the incubation duties mainly performed by the male. A successful breeding pair of adults will skip the next year’s season, returning the following year after that to breed again.

The chicks fledge about 41/2  months after hatching. They will become fully pelagic (live entirely at sea) for the first 6 or 7 years of their lives before finally returning to the breeding colonies. Even so, they may not actually breed for several more years after that.

How long do Grey-headed Albatrosses live?

How many Grey-headed Albatrosses are there today?

Do Grey-headed Albatrosses have any natural predators?

Grey-headed Albatrosses don’t really have any natural predators due to the remoteness of their breeding grounds. The main threat to their numbers comes from food availability; in particular how far they have to fly to get food during the breeding season.

OTL22-21 A true expedition, our Weddell Sea cruise sets out to explore the range of the Emperor Penguins near Snow Hill Island. We will visit the area via helicopter and see a variety of other birds and penguins including Adélies and Gentoos. 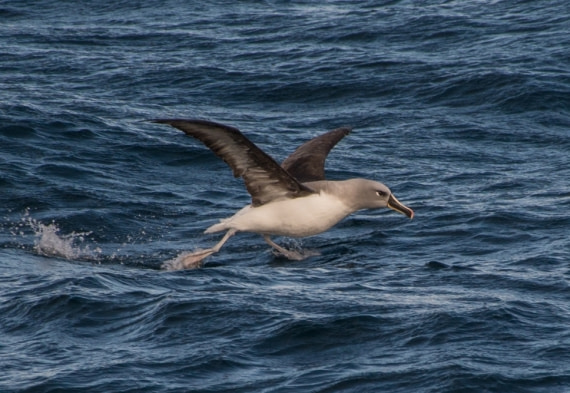