Bearing the less-than-noble nickname "hook-nosed sea pig," these sleek swimmers were once close to extinction in the US and are now protected under American law

Appearance: Grey or brown with white dappling, males being darker, with some males having scarring around the neck.

How do Grey Seals feed?

When fishing and foraging Grey Seals will on average dive as deep as 70 metres (though they are able to dive as far as 300 metres). Grey Seals do not necessarily eat every day, and will fast during the length of the breeding season. They will sometimes also perform what is known as “social feeding,” herding fish to make it easier to catch them.

Grey Seals will “haul out” (come ashore) between hunting trips together in small groups. They form much larger groups during breeding season. The areas where they group for breeding are referred to as “rookeries.” At sea they are generally solo or in smaller groups.

How fast do Grey Seals swim?

Female Grey Seals will mature sexually at about 4 years of age. Males take a little longer, maturing around 8 years of age. Both have breeding year spans of about 15 years. Males arrive at the rookeries in order to compete for mating rights over females, often scarring each other in the process. Dominant males hold sway over certain areas of the rookery (as opposed to dominating harems like other species) that can contain up to 10 females. Females come ashore pregnant from the previous season’s mating sessions.

Grey Seal pups weigh around 14 kg when born. The time of birth depends on their location – the North American pups are born around January and February whereas European pups are born from September through November. Born with soft white fur, the pups are nursed on their mother’s milk which is made up of up to 60% fat, growing to four times their birth size. During the breeding season dominant males and birthing females will stay ashore for the entire time, feeding off of their fat reserves to stay alive. This can result in fasts that last as long as 20 days for females and 50 days for males. In the space of a month the pups will grow their waterproof adult fur and head off to sea in order to learn how to provide for themselves. The females will then mate at the end of the season, ready to return the next year with another pup ready to be born.

How long do Grey Seals live?

Female grey seals live up to 35 years in the wild while males live 25 years on average.

How many Grey Seals are there today?

Estimates place the worldwide Grey Seal population at around:

Do Grey Seals have any natural predators?

Grey Seals are prey to sharks and Orcas.

JNS01a23 Search for whales, and other Arctic wildlife of the land, sea, and air on an adventurous voyage from our home port of Vlissingen to our favorite Arctic island group.

JNS01b23 Search for whales, and other Arctic wildlife of the land, sea, and air on an adventurous voyage from the German port of Bremerhaven to our favorite Arctic island group.

HDS01a23 Search for whales, and other Arctic wildlife of the land, sea, and air on an adventurous voyage from our home port of Vlissingen to our favorite Arctic island group. 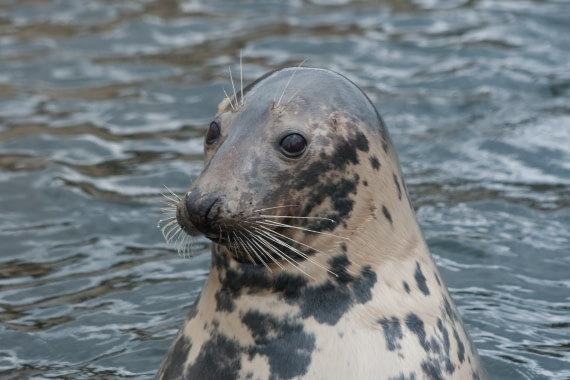