Decked out in their distinctive dappled coloring, these dapper "little devourers" have a pigeon-like habit of pecking at the water while feeding

How do Cape Petrels feed?

Cape Petrels do a lot of their feeding by swimming and pecking at the water to catch krill. They also occasionally dive to strain krill out from the water. In addition they are also one of the species of birds known to follow fishing vessels in order to nab fish waste that is thrown overboard.

Cape Petrels become quite aggressive while competing for food and will spray their foul-smelling stomach oil at competitors in an attempt to drive them off, even if that competition is other members of their own species.

Cape Petrels form large flocks while foraging at sea. They form loose colonies at land during the breeding season where they are quite competitive for prime nest spots.

How fast do Cape Petrels fly?

Cape Petrels fly at around 18 metres per second.

Cape Petrels migrate to their colony sites around the middle of October. The colonies nest on cliffs or on the level ground usually within a kilometre from the coastline. The nests are created with pebbles and are located under overhanging rock projections which are used as protection from the elements.

The majority of the mating pairs are monogamous and will mate with their partner from the previous season. A single egg is laid in November. Both parents take turns incubating the egg for the next 45 days.

Once the egg is hatched the parents will switch off caring for the chick and going off to feed, bringing back nourishment for the hatchling in the form of regurgitation.

The chicks fledge around 45 days after hatching.

How long do Cape Petrels live?

Cape Petrels live for about 25 years.

How many Cape Petrels are there today?

The Cape Petrel population is estimated at around 2,000,000 individuals worldwide.

Do Cape Petrels have any natural predators?

Skuas are predators of the Cape Petrels’ eggs and hatchlings.

We have a total of
33 cruises 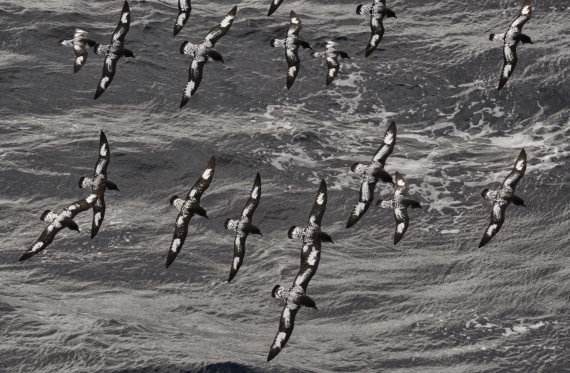