The final expedition hut of famed polar explorer Ernest Shackleton is one of the most popular sites we visit in the Ross Sea. Located at Cape Royds in the McMurdo Sound, this legendary hut was used by Shackleton and his crew during their ultimately unsuccessful though enduringly historic attempt to reach the South Pole from 1907-09.

Shackleton’s Hut has since become one of the most fascinating and frequently visited sites in all of the Great White Continent. Travelers to the hut will not only see a major remnant of the heyday of Antarctic exploration, but also a number of compelling natural sights – not least of which is the world’s southernmost Adélie penguin colony.

Conditions permitting, we aim to visit the Shackleton Hut on our Ross Sea voyages.

Inside and outside the Shackleton Hut

Shackleton’s Hut was built on Cape Royds, a volcanic headland that forms the western part of Ross Island in the McMurdo Sound. The cape was named by the Discovery Expedition for its meteorologist, Lieutenant Charles Royds of the British Royal Navy.

A scenic polar panorama surrounds the hut, providing views of the Transantarctic Mountains, Mount Erebus, the Barne Glacier, and of course, McMurdo Sound. On the immediate grounds of Shackleton’s Hut lie the remains of the expedition’s provisions and equipment, including boxes of maize, dog kennels, pony feed boxes, and a wheel from an Arrol-Johnston car.

Inside the hut, meanwhile, are shelves stacked with Edwardian-era provisions: tinned meats and vegetables, and bottles of raspberries, gooseberries, and red currants wrapped in straw. The interior of the Shackleton Hut is virtually a museum in itself, fully equipped with its original provisions, furniture, and cooking stove. The jackets and laundry of Shackleton and his men are even still hanging on hooks, as though they’d only recently been placed there.

In late January of 1908, Ernest Shackleton, like Robert Falcon Scott before him, was unable to land in King Edward VII Land due to the harsh conditions, deciding instead to enter McMurdo Sound. With local ice conditions preventing him from reaching Hutt Point, he chose Cape Royds as the site to establish his expedition’s winter quarters. This would become known simply as Shackleton’s Hut.

On February 6, 1908, the party began erecting a 10 x 5.8 meter (33 x 19 feet) prefabricated building they’d brought from London. They dug the hut’s foundations into the rocky, frozen ground, setting their wooden piles with a mixture of cement and cinders, and insulating the building with felt and granular cork.

Inside the hut, they installed a seven-light carbide acetylene generator and two stoves. Only the large American “Mrs. Sam” Columbian range was used for cooking, while the other stove was fitted with a hot water tank. Stables were added along the north wall for the four surviving Manchurian ponies, in addition to a garage for their 12-15 HP Arrol-Johnston car, the first motor transport ever used in Antarctica.

Except for Shackleton, who had his own room, the crew slept in two-man cubicles with improvised beds and curtains hanging from wires for privacy. The expedition’s artist, George Marston, painted panels of Joan of Arc and Napoleon in the hut, while surgeon and cartographer Eric Marshall furnished his space with a table made out of wash-basin legs and a drawing board. Two other rooms were also built, one a biological laboratory and the other a photographic darkroom.

Shackleton described the hut as “not a very spacious dwelling for the accommodation of fifteen persons, but our narrow quarters were warmer than if the hut had been larger.” Not surprisingly, warmth was more valuable than space during the cruel Antarctic winter.

The extensive restorations of Shackleton’s Hut

When members of the Terra Nova Expedition first visited Cape Royds in January 1911, they found years-old evidence of a rapid departure from Shackleton’s Hut: A meal had been left on the table uneaten, and socks were hanging up to dry. The hut was later visited by the Ross Sea Party in 1915-16, as it was a likely location for matches, tobacco, and soap.

By the time the US icebreaker Edisto arrived at Shackleton’s Hut on January 29, 1948, boards were missing from the roof, the stables were full of snow, and the garage had collapsed.

From 1957-58, a crew from the New Zealand Navy ship HMNZS Endeavour carried out cleaning duties around the Shackleton Hut, and in 1959 a restoration committee was established by government representatives and the New Zealand Antarctic Society. The committee recommended Shackleton’s Hut be restored to its original state, ensuring all artifacts of value were preserved. From 1960-61, work starting on restoring the cooking area, biological laboratory, garage, and stable.

By the 1990s, the Antarctic Heritage Trust had installed a data logger to monitor temperature and relative humidity at the hut. And between 2004 and 2008, an international team of heritage and conservation specialists spent each Antarctic summer securing Shackleton’s Hut for future generations to enjoy. The building was made structurally secure, and the more than 6,000 artifacts were catalogued and returned to their original places. 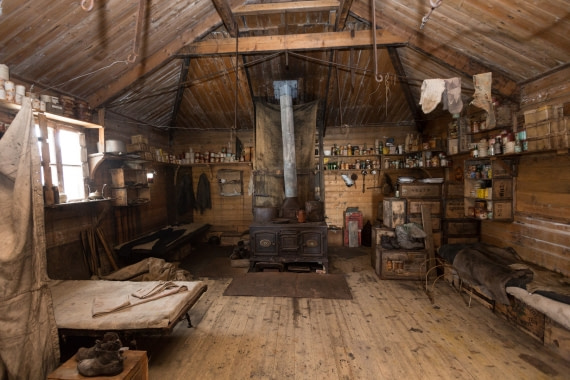 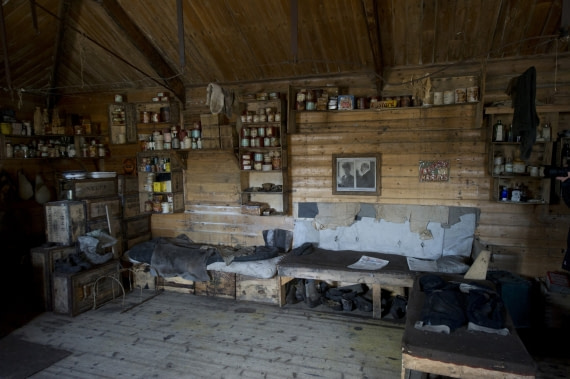