A shoulder of coal-gray rock shoving into the sea, this westernmost promontory of Ross Island is the site of famed explorer Ernest Shackleton’s historic hut

Despite being a relatively small location, Cape Royds occupies an important position within the range of historical Antarctic landscapes. It is the site of a preserved expedition cabin built by polar explorer Ernest Shackleton and his crew in 1908, and it is also about twenty miles from another hut built by Robert Scott on a previous Antarctica voyage.

The terrain of Cape Royds, meanwhile, includes two other noteworthy locations: Flagstaff Point, a spot near Shackleton’s cabin where he erected a flag, and Blacksand Beach, named for the black volcanic sand that colors the shoreline. Shackleton’s crew spent the winter of 1908 at Cape Royds and would have found both of these locations a safe walking distance from their cabin.

The location was named after Charles Royds, a Royal Navy lieutenant who served as the expedition’s meteorologist. It was not until a few years later, however, during Shackleton’s 1907 – 1909 British Antarctic Expedition, that any lasting human structure was built upon Cape Royds.

After being unable to land on King Edward VII Land, Shackleton sailed into McMurdo Sound in 1908. He searched for a good site on which to build a dwelling so that he and his crew could survive the winter, eventually settling on Cape Royds – about twenty-three miles from Hut Point, where Scott and his crew built their own cabin some years earlier.

Shackleton and his men left Cape Royds the following spring, and it was not until 1910 that their cabin was visited again. A former member of Shackleton’s expedition, Raymond Priestly, entered the cabin to find the supplies he and his companions had left behind two years earlier was intact. Even the biscuits were still fresh. And almost a century later, in 2006, five crates of Mackinlay Whisky were discovered buried under the hut. One of them is now in a New Zealand museum.

The Adélie penguins of Cape Royds

The McMurdo Sound, a division of the Ross Sea largely covered in a giant ice shelf, features a number of open-water areas surrounded by ice. These areas are known as polynyas, and within McMurdo Sound it is these patches of exposed sea that support the most southern Adélie penguin population in the world.

The penguins are dependent on these polynyas, which allow them easier access to fish. Due to the presence of this Adélie rookery, a sizable portion of Cape Royds is designated as an Antarctic Specially Protected Area that also includes Shackleton’s hut. 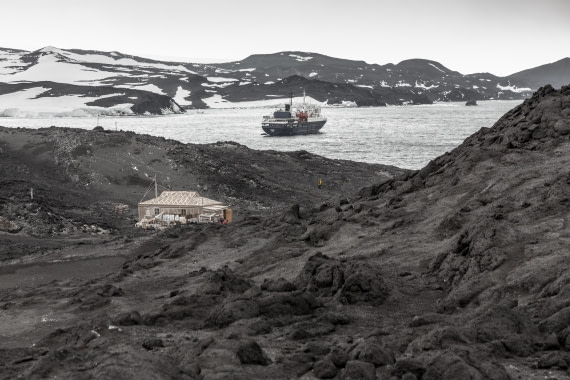