​Inuit, the word means “men” in the Inuit language, are traditionally subsistence hunters, living primarily from products from whales, Walrus, Caribou, Musk Oxen, Arctic Fox, Polar Bear and seals. As of 2012, a whopping 89 percent of the total population of Greenland was Inuit.

This means that there are an estimated 51,000 Inuit people living in this country, and the vast majority of them live in the southwestern corner. However, there are three distinct major Inuit groups: Inughuit, Tunumiit and Kalaallit. Approximately 10 percent of the Inuit people live in remote regions, and each group speaks its own language.

In Greenland, about 11 percent of the residents are not Inuit. This means that the each Inuk who lives in Greenland has the potential to be exposed to new dining options, but even this has not considerably altered their traditional diet. Anthropologists and other researchers have determined that the Inuit diet has stayed mostly the same throughout the centuries, and it consists primarily of meat and fish because it is hard to gain access to vegetables and fruit in cold, remote areas.

Every culture throughout human history has developed some type of folklore, and most of these stories were meant to explain away fears about the unknown. For example, some modern Americans believe in Bigfoot, but most people are convinced that this creature does not exist.

For the ancient Inuit people, their mythological creature to fear and stand in awe of was called the Qallupilluk. This word translates into monster, and tales about its horrific actions were used to keep children from wandering far away. According to the early legends, Qallupilluk lived under the water, and this twisted mixture of a humanoid figure/monster was said to drag children to an icy grave.

For those interested in experiencing the Inuit culture, the Faces from the Scoresby Sund Exhibition in Greenland provides you a winning option. The exhibition features a wide collection of intimate and moving Inuit portraits taken during the 1970s, granting visitors a closer look into the daily routines and hunting rituals of this indigenous Arctic people.

Founded by Dutch biologist Ko de Korte, who took the photographs himself while finishing his doctoral thesis in Greenland, the exhibition presents the portraits in two locations: Two thirds of the photos are in the Uummannaq Children’s Home until September 2018, while the remaining third is in Ittoqqortoormiit without an end date.

From August to October, Oceanwide Expeditions runs a variety of Scoresby Sund cruises that visit Faces of the Scoresby Sund. The exhibitions are free of charge, though only open by request. Please contact us for details.

OTL11a23 The Spitsbergen and Northeast Greenland cruise sails waters filled with breath-taking scenery. The expedition passes through areas that are home to seals, seabirds, whales, and polar bears, topped off with nighttime viewing of the Northern Lights.

We have a total of
7 cruises 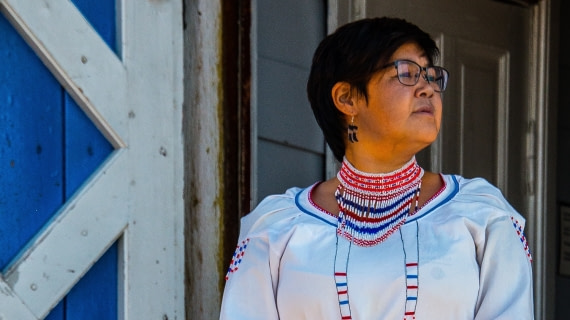