Cuverville Island stands at the entrance of Errera Channel and is flanked by the precipitous mountains and glaciers of the Antarctic mainland. The island is a 252-meters high (826 feet) rock with a long shingle beach at its foot, home to a sizable colony of gentoo penguins.

About 6,500 breeding pairs of gentoos call Cuverville home, composing the largest rookery on the Antarctic Peninsula. This population is recognized by BirdLife International as an “Important Bird and Biodiversity Area”. But the flora is every bit as precious: Antarctic hairgrass (Deschampsia antarctica) and Antarctic pearlwort (Colobanthus quitensis) can also be found here.

Icebergs often run aground nearby, and minke whales commonly frequent the Errera Channel, making the waters around this island ideal for Zodiac cruising.

Back in Time at Cuverville Island

The explorer de Gerlache led an Antarctic expedition here from 1897-99 and named the island after a vice-admiral in the French Navy. It was common in those years to name uncharted places after sponsors of expeditions - Wilhelmina Bay, for example - but also after people who died during those expeditions - Danco Island and Wiencke Island - or loved ones who were waiting back at home - as with Charlotte Bay. 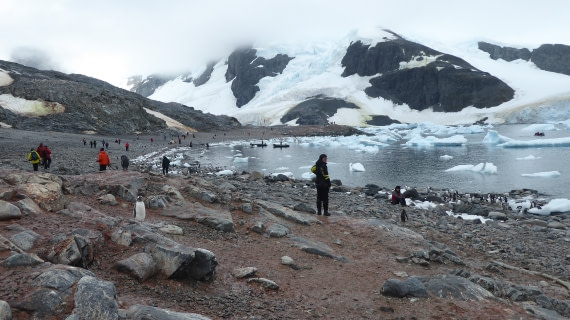