These non-migratory mallards are highly territorial, the males' red and orange eyes brightening when breeding time has arrived

Appearance: Mottled grey and brown, lighter along the belly

How do Crested Ducks feed?

Crested Ducks are considered to be “dabbling ducks” – they swim and feed from the surface of the water, rarely making dives to get at food further down. However when food isn’t readily available at the surface Crested Ducks will make a shallow dive to hunt molluscs, crustaceans, insects, and insect larvae.

Like other ducks, Crested Ducks flock together in groups sometimes numbering in the hundreds.

How fast do Crested Ducks fly?

Crested Ducks can fly at a sprint of up to 95 km per hour for short distances. Cruise speeds average around 80km per hour.

The breeding season for the Patagonian Crested Duck  is between October and December. Crested Ducks build their nests in shallow coastal regions or near ponds, hiding them in tall grass or foliage.

The nests are made from the surrounding vegetation and lined with feathers.

Once the eggs hatch both parents will tend to the ducklings. The chicks will begin to fledge (grow their adult flight feathers) when they are about 10 weeks old.

How long do Crested Ducks live?

Crested Ducks live an average of 20 years in the wild.

How many Crested Ducks are there today?

There is no certain number or even an estimate for the worldwide Crested Duck population. The Falkland Islands (Patagonian) population is known to be around 20,000 individuals.

Do Crested Ducks have any natural predators?

Crested Ducks are on occasion attacked by the Black-crowned Night Heron. Ducklings are also vulnerable to other seabirds like the Skua. 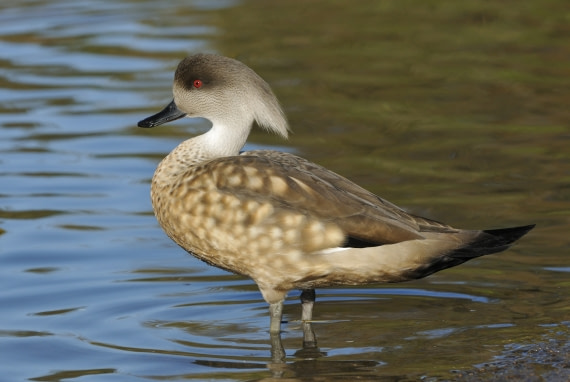