As we moved away from the ship, the Zodiacs scattered in several directions. I took my Zodiac into Brooklyn Channel, between the two islands. Very soon we spotted blows ahead. The humpbacks were here!

The alarm seemed to go off very early today.  It was still dark outside my porthole as we got up to get the day started.  Once I got dressed and went outside to load the boats, all hesitation for the early hour disappeared.  The day was absolutely clear and with the low angle of the sun, the icy mountains were exquisitely lit with the palest of blues, pinks and mauve pastel colors. The MV Ortelius was drifting peacefully on a mirror-calm sea in Wilhelmina Bay on the Antarctic Peninsula.  Wilhelmina Bay is surrounded on two sides by the spine of the continent - rising to 2000 metres and completely covered with ice and snow with Nansen and Brooklyn Islands forming the other boundaries.

Wilhelmina Bay is well known for feeding humpback whales so we are hopeful that we’ll find them in short order and be able to see these magnificent giants at close range. They did not disappoint!  As we moved away from the ship, the Zodiacs scattered in several directions. I took my Zodiac into Brooklyn Channel, between the two islands.  Very soon we spotted blows ahead.  The humpbacks were here! The surface of the bay was paved with sparkling patches of brash, the leftover broken pieces of glacial ice from calvings and the disintegration of icebergs. The Zodiacs push through easily, but we do have to go slow—and miss the odd larger chunk.

Unbelievable close views of the whales

Finally, carefully, we slowly approached three whales; one calf and two adults. Obeying all the rules of boating, the whales were unperturbed by our presence. By idling quietly we were treated to unbelievable close views of the whales at the surface. They lounged noisily at the surface. Perhaps they’d recently finished a bout of feeding. The calf was a bit more rambunctious so we managed to see his flukes a couple times as the two adults mostly made shallow and short dives in a very leisurely manner. There’s always some excited anticipation when they all disappear from view under for a dive. 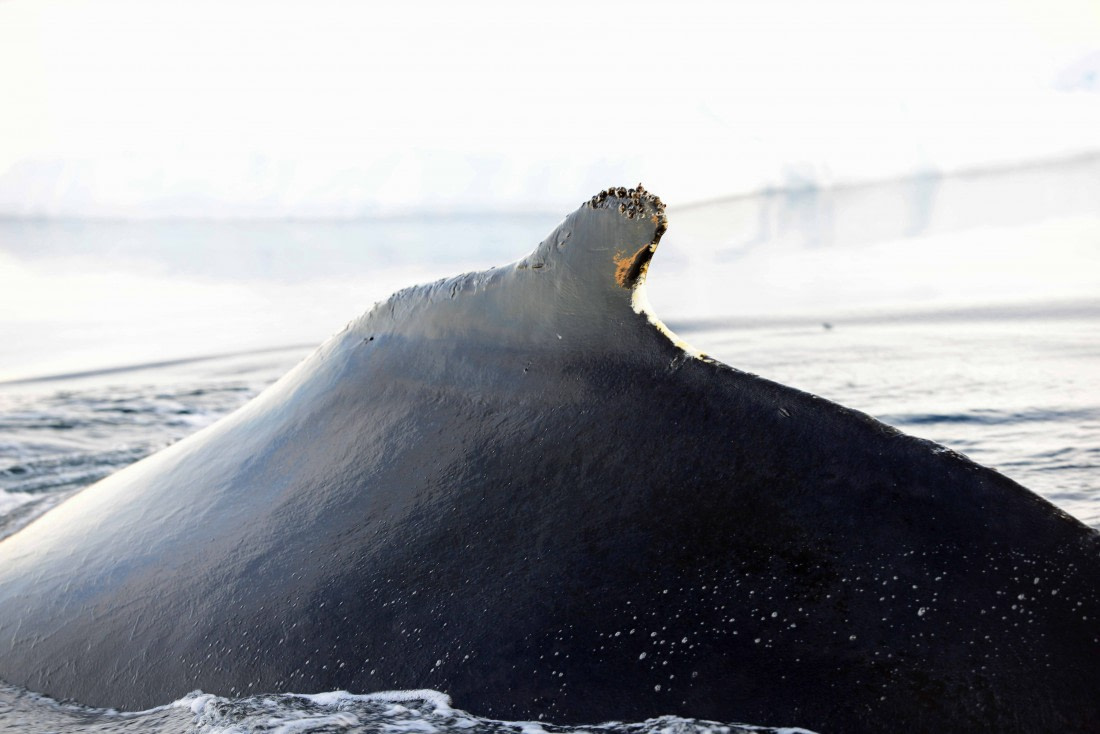 One of those times we got the shock of our lives when they returned to the surface just a couple metres from the Zodiac—it seemed we could reach out and touch them! It’d be hard to beat that moment if we stayed longer. Besides, cups of tea were beckoning us back to the ship. So we bid our new friends farewell and left them to their exquisite surroundings. It was time for us to return to the Ortelius and start our journey home.

We have a total of
36 cruises