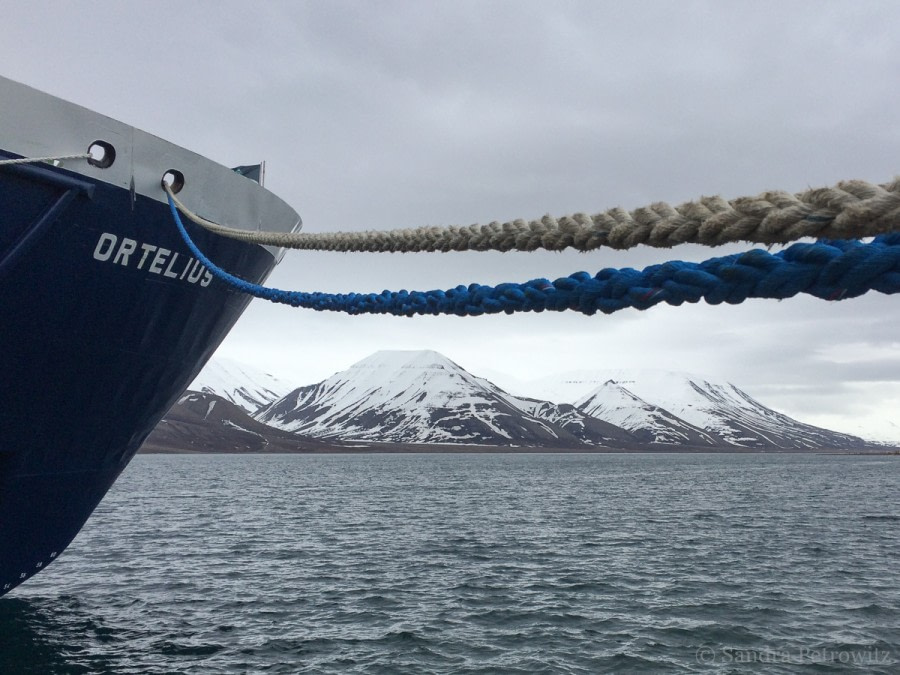 Northward ho! We arrived at the pier in Longyearbyen where Ortelius, our home for the next week, was already waiting for us – as were members of the Expedition Team who welcomed us. From around 4pm, boarding started, and we were soon checked in by our Hotel Manager Sebastian and his assistant Lilian. Our luggage had already found its way into our cabins, so we had some free time to get unpacked, settle in and meet our fellow adventurers. Shortly afterwards we gathered in the Lecture Room to be officially welcomed by the Hotel Manager and to attend the mandatory safety briefing followed by a safety drill. Wearing our big orange lifejackets we mustered in the Bar and proceeded to the top deck for a look into the lifeboats. Meanwhile, Ortelius had left the pier, and so we were on our way out of Adventfjorden and into Isfjorden. Before dinner, we got to know Captain Mika Appel as well as the members of the Expedition Team and raised our glasses for a toast to the voyage. Hungry after a long day of travels, we flocked to the Dining Room – the first of many delicious meals was waiting for us! 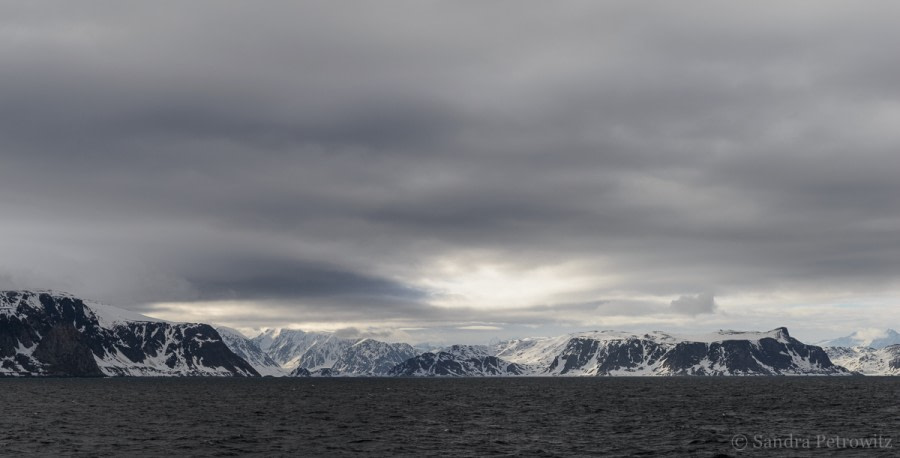 After a good night’s sleep we found ourselves at the end of our northbound leg off the “Spitse Bergen” (“Pointed Mountains”), the name the Dutch discoverer Willem Barentsz gave to these lands. In the morning the mandatory how-to-behave-in-the-Arctic and Polar Bear safety briefings were given, along with instructions on travelling and landing with our sturdy Zodiacs.

Turning eastward and then southward into the Woodfjord we reached the Liefdefjord. Zodiacs were launched and we set off for a zodiac cruise around Andøyane, the “Duck islands”. We found Eider ducks and a couple of King Eiders, Long-tailed Ducks were seen and Skuas, a Seal showed up briefly. After we had got back to Ortelius we cruised down into the Liefdefjord towards the magnificent Monaco Glacier. Splendid sunlight, ice in the fjord and the view made for a wonderful evening. 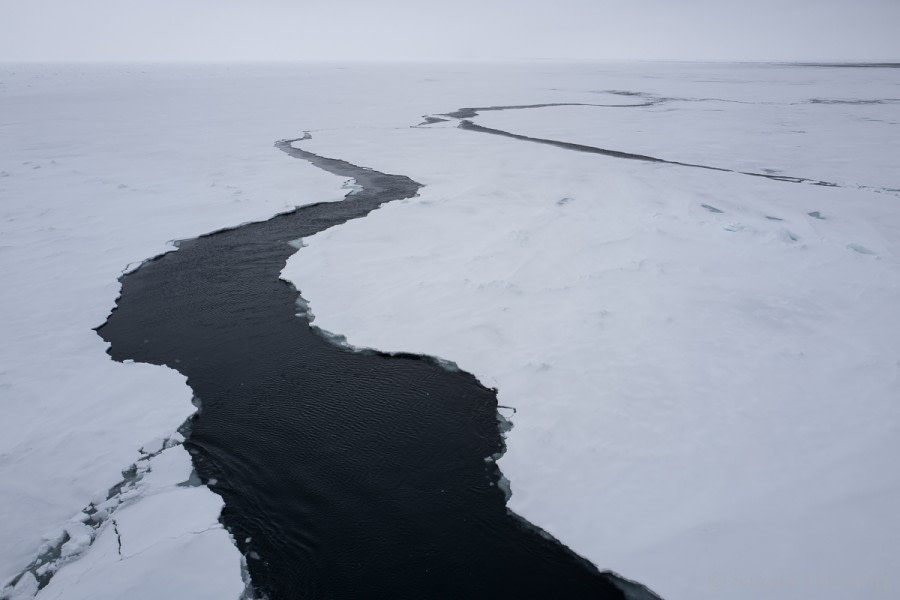 During the night we sailed towards Hinlopenstretet, the body of water in between Spitsbergen (the main island) and Nordaustlandet. Shortly after breakfast we passed Alkefjellet, a famous bird cliff consisting of a characteristic blackish volcanic Dolerite intrusion within brightly coloured marine layers. Flocks of Little Auks, Brunnich’s and Common Guillemots were observed nearby.

We continued our cruise southwards in sunshine and good visibility. In most places the ice coverage was rather sparse, not a preferable habitat for Polar Bears. Nevertheless, the Expedition Staff and many of us were scanning the area continuously with the help of binoculars, telescopes and telelenses. For those who needed a break from looking for the bear, Bill’s lecture about whaling and sealing in the Arctic was a welcome change of topic just before lunch.
In the afternoon it started to snow and the visibility decreased incredibly fast. Sandra gave an interesting talk, providing us with ideas and suggestions on how to potentially improve our photography.

In the evening Expedition Leader Rinie and Captain Mika decided to stay in the fast ice of Bjørnsund close to Wilhelmøya. Shortly after Ortelius had been ‘parked’ in the ice this turned out to be a splendid decision: A mother and two cubs were spotted around 7 kms away from the ship. Everybody was excited – despite the chilly wind we dashed for the outer decks to see the bears. They came a bit closer (still far away) for a while and then slowly walked away from the ship, disappearing in snow squalls and fog. 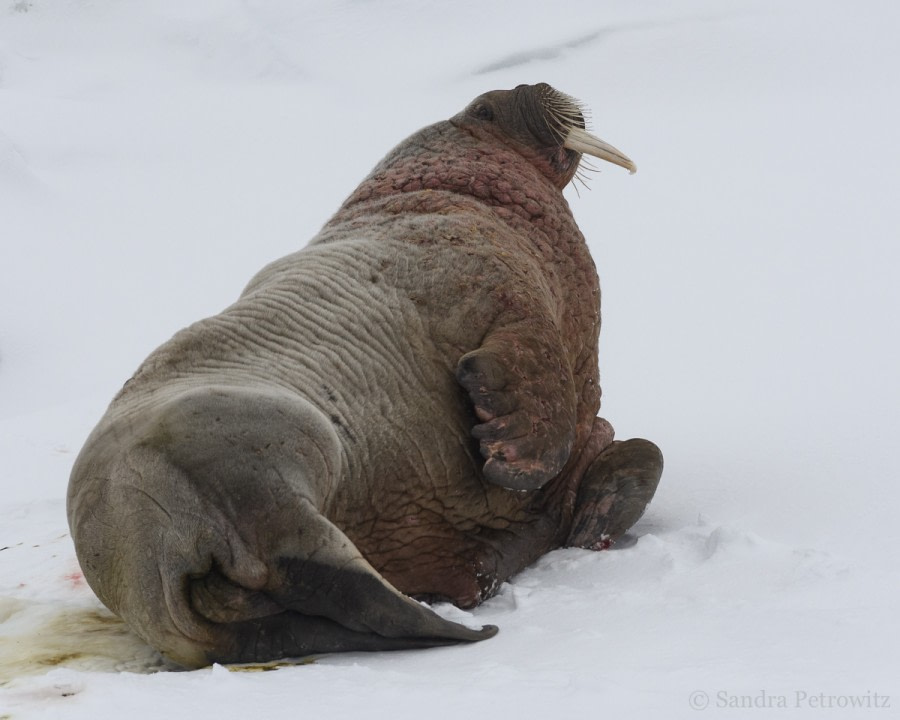 In the morning the mother Polar Bear and her two cubs had disappeared. Visibility had turned typically polar, i.e., very bad. We turned East and went towards the ice again. At ten o‘clock Aad gave a lecture about present-day Spitsbergen. Just after the lecture, in an example of excellent timing, a Walrus presented itself on an ice floe, accompanied by an Ivory Gull. Ortelius approached both very slowly and carefully allowing us to take excellent photographs. After a while another Walrus appeared on port side, having a look at the ship from in between the ice floes but disappeared as quickly as it had come.

Staying near and in the ice did not reveal the elusive Polar Bears, although we did spot fresh Polar Bear tracks on the ice floes. Ortelius turned around, sailing up Hinlopenstretet in a north-easterly direction past the small island of Franzøya towards Wahlenbergfjorden where we were to stay the night. 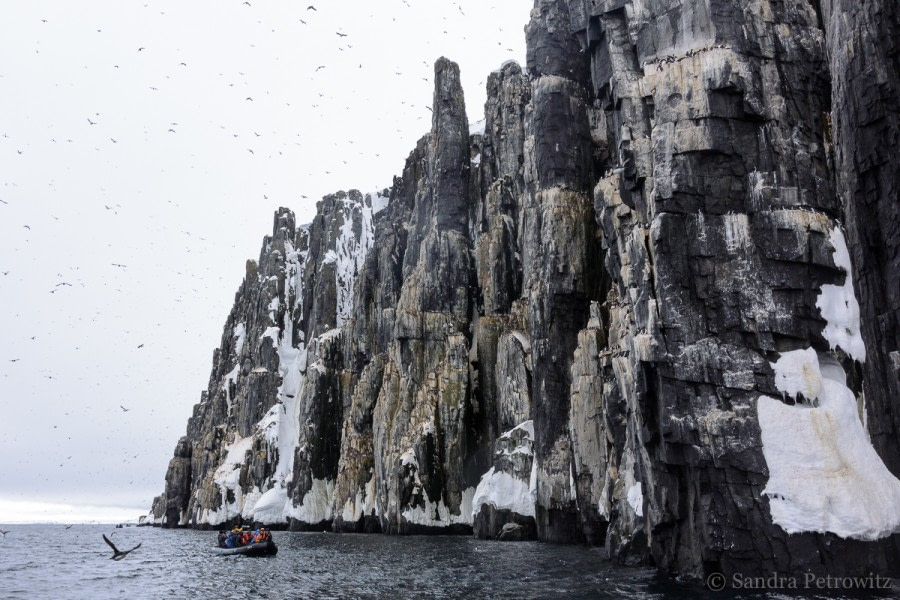 At wake-up call we found ourselves off Alkefjellet. By 09.15 the first group had left Ortelius. How we loved the smell of ammonia in the morning! The zodiacs slowly passed the rocks inhabited by an estimated sixty thousand pairs of breeding Brunnich’s Guillemots. Polar Foxes were seen, Barnacle Geese, Kittywakes, Black Guillemots, while Glaucous Gulls were feasting on the carcasses of dead birds. By 12.15 all of us had returned to Ortelius.

The afternoon saw us back in Wahlenbergfjorden where two Polar Bears were spotted. From the interplay between the two it turned out that they were trying to court and seduce each other, with the female being somewhat less active than the male, at times even trying to chase the male away – how very human it all looked!

It was an event very rarely seen by an expedition. In the course of the afternoon the bears came a bit closer to the ship, but we were not to witness the ‘’conclusion’’ of this boy-meets-girl game: as it may last up to a week we unfortunately had to leave. Around four o’clock another Polar Bear presented itself, but again at a distance. During the recap Rinie gave us more details on the reproduction process of Polar Bears. After dinner we slowly made our way out of the ice and towards our destination for the next day: the northwest corner of Spitsbergen. 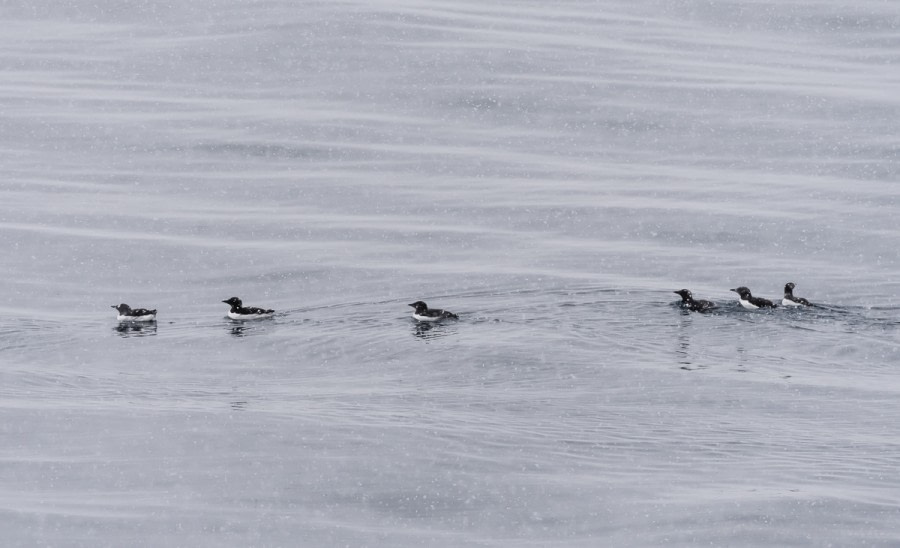 In the morning we were anchored off Alicehamna in Raudfjorden. Unfortunately, a planned snow-shoe walk had to be cancelled as fog and snow had reduced visibility to the extent that we would end up in the extremely dangerous situation of being unable to spot Polar Bears in time: in the Arctic, Nature rules!

In the afternoon we made a landing at Amsterdamøya – a historic site for Dutchmen as, from approximately 1614 to 1645, it was the main whaling station for the Dutch so-called Chambers, companies from a number of towns that invested in whaling ships. The remains of the blubber ovens can still be seen: the black remains of the whaling oil, mixed with sand, called ‘’bacon concrete’’. Some ovens are quite close to the seaside and run the risk of being washed away by the sea.
Two groups were made, the ‘beach crawlers’ and the hikers. The beach crawlers heard about the history of Amsterdamøya, the hikers observed various kinds of wildlife and stretched their legs while walking along the shoreline.

Upon returning to Ortelius we heard that a BBQ had been organised on our helicopter deck – against the background of the majestic scenery of snow-clad mountains in a bay near the whaling station we enjoyed the good bbq’ing by our galley staff. 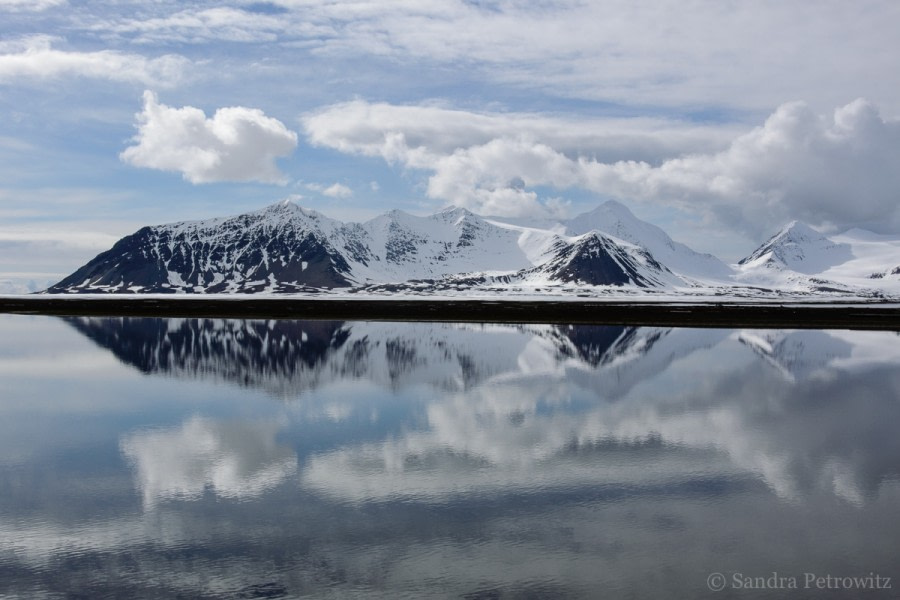 In perfectly calm conditions we sailed into Forlandsundet between Prins Karls Forland and the main island of Spitsbergen. After breakfast we landed in Tordenskjoldbukta, a bay sheltered by rocky outcrops on which Glaucus Gulls and Barnacle geese were seen. We split into three groups, and the hikers took off first with Bill and Szymon, covering quite some terrain across the mossy tundra and onto little ridges from where great views were to be had. The medium-walk group with Christophe, Mick, Benjamin and Aad managed to get fairly close to some Reindeer, one of which was a calf of only a couple of days old – a very special experience! The ‘Leisurelies’ with Sandra explored the surroundings of the landing site where they found the first Purple Saxifrage of the season, reindeer antlers, a selection of Lichen, had great views over the shoreline and precious minutes of Arctic Silence – to all the better hear the song of the Snow Buntings.

When everybody was back on board, Ortelius sailed towards the other side of Forlandsundet, to a place called Poolepynten. This sandy spit is a favourite Walrus haul-out site, and this time we got lucky: The animals were home, resting peacefully in the sand and partly on top of each other. We split into two groups of which one took a stroll while the other approached the huge brown sausages on the beach. They did not do much except scratch themselves, occasionally burp and smell, which is very typical of Walrus – and as we observed, they are extremely good at what they are doing.

After a great time at Poolepynten we set course towards Longyearbyen. Of course, at some stage we also had to face the more or less pleasant tasks of settling our ship’s accounts and return the trusted rubber boots and Zodiac lifejackets. At 19.00 we gathered in the Bar for a toast to the successful voyage. Soon afterwards, we flocked to the Dining Room for our last dinner on board, all the while we were keeping at least half an eye out for Whales and Puffins. 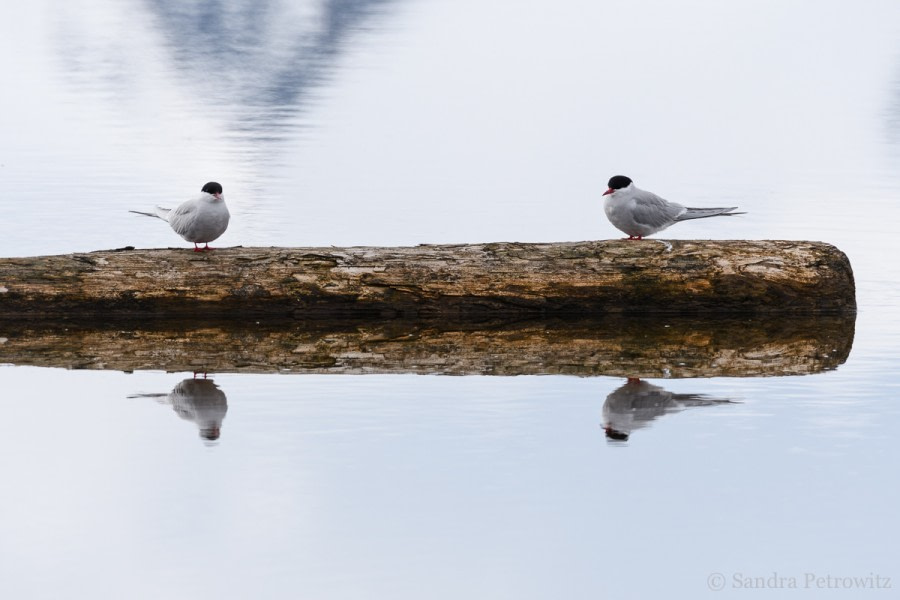 Way too soon our Arctic was now coming to an end – and what a remarkable week it had been! Around midnight Ortelius arrived at the pier in Longyearbyen, and those passengers leaving on the early-morning flight disembarked the vessel. All others enjoyed a quiet night in their cabins.

When for the last time Rinie woke us up in the morning, we put our big luggage in the corridors as asked, so the crew could take it off the ship for us. After the last breakfast on board, it was time to say goodbye. Goodbye to our ship and its crew and staff, goodbye to our new friends. Arrangements were made to stay in touch and farewells were said. We could look back on an impressive trip, and all of us had many memories of wildlife and spectacular scenery during our days in the ice, our Zodiac-cruising activities and our shore landings. Finally, we handed in the keys to our cabins, picked up our luggage from the pier and made our way into town or to the airport for our onward journeys. May we meet again somewhere, someday!

Thank you all for joining us on this Arctic adventure, for your great company, good humour and enthusiasm. We hope to see you again in the future, wherever that might be!

On behalf of Oceanwide Expeditions, Captain Mika Appel, Expedition Leader Rinie van Meurs, Hotel Manager Sebastian Duma and all the crew and staff, it has been a pleasure travelling with you.

Have you been on this voyage? 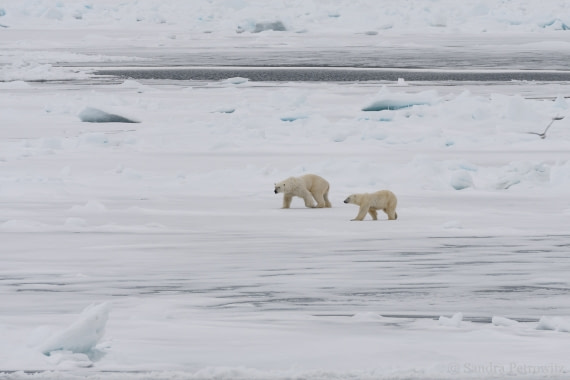 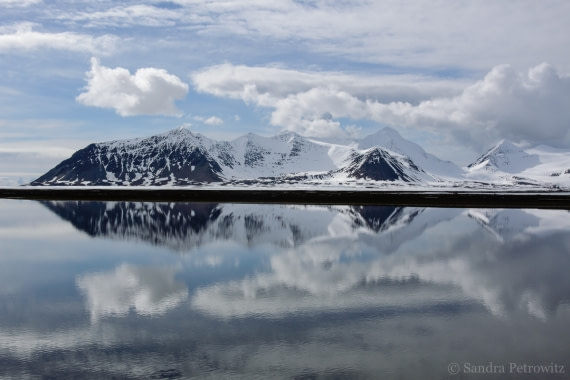 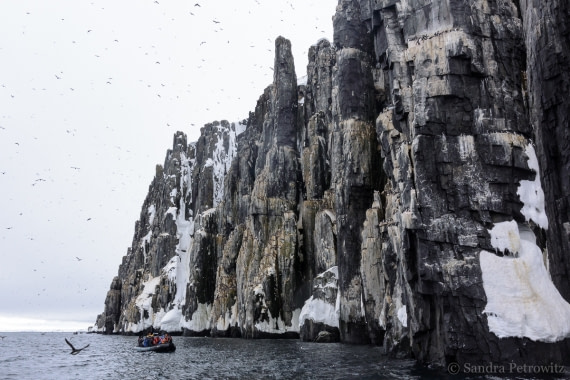