These sandpiper relatives fly over 1,000 km or 600 miles in a day's migration, living so far north that few studies have been made as to their breeding habits

Location: Coastal regions – the Arctic in the summers, migrating to various locations around the world during winter as far south as South Africa and Australia.

Appearance: Darker camouflage colours during the winter, brighter plumage during the breeding season.

How do Turnstones feed?

Turnstones are waders, wading in shallow waters. They gained the name Turnstone from their habit of turning over stones and seaweed in their search for invertebrates.

Turnstones do tend to be social, forming colonies ranging from tens of individuals to thousands, and they will mix with other kinds of sea birds. However they become aggressive in chasing off the other breeds when food is at stake.

How fast do Turnstones fly?

Turnstones can fly up to 65 km per hour.

Female Turnstones are sexually mature around 2 years of age; the males reach maturity at 4 years.

Turnstones display distinctly different plumage depending on the season.

During the winter months their feathers are darker browns and greys.

However during the breeding season their plumage takes on brighter colours – a black and white head, light brown back, white belly, with exposed red legs.

Males arrive first at the breeding grounds somewhere in the month of May, getting to work scraping out the shallow nest. They and their previous mates (if applicable) will often return to the same breeding grounds as the previous years.

Turnstones are monogamous and once paired off will generally return to the same mate for following breeding seasons.

While at their breeding grounds Turnstones become extremely aggressive, flying up to 160 km to chase away invasive gulls.

The nests are slight, usually just scrapes or small depressions in ground near areas with low vegetation. On average 4 light olive-coloured eggs are laid. The parents will take turns incubating the eggs for the following 3 to 4 weeks.

How long do Turnstones live?

Turnstones live an average of 6 or 7 years in the wild. The highest recorded lifespan was a bit over 19 years of age, recorded in Finland.

How many Turnstones are there today?

Do Turnstones have any natural predators?

Turnstone eggs and young are prey for gulls, jaegers, ravens, and foxes. Parents have been recorded pretending to have a broken wing in order to lure predators away from their nests. Adult Turnstones are sometimes preyed upon by owls, merlins, falcons, and sparrow-hawks. 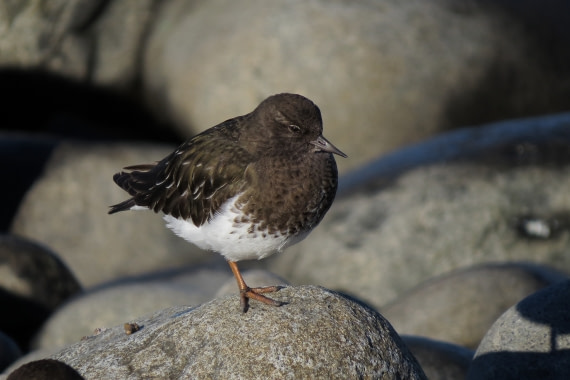