Known for its colossal king penguin colony, Salisbury Plain is a longstanding favorite in our South Georgia expeditions

The sheer number of king penguins breeding at Salisbury Plain has been the focus of countless photographs. This colony is the second largest king penguin colony in South Georgia and one of the largest in the world, with around 60,000 king penguin pairs comprising one very popular hangout. But though we love Salisbury Plain, landing there is not always possible, since the area is not sheltered from the large swells that surge in from the ocean.

The history of Salisbury Plain

A large coastal plain in the Bay of Isles, Salisbury Plain was discovered by James Cook during his second voyage of 1772―1775. The area first appeared on a British Admiralty chart in 1931 and was named after Salisbury Plain in England. The South Georgia version of Salisbury Plain was formed by the outwash from Grace Glacier, where penguins like to breed.

The king penguin is the second largest species of penguin after the emperor penguin, and their similarity in appearance can sometimes lead to confusion. A king penguin beak is longer but less curved than an emperor’s, and the vermillion color of a king penguin face is more pronounced. The king penguin colony at Salisbury Plain has been growing rapidly over the past century due to environmental changes, and in 1912 there were only 350 pairs counted. 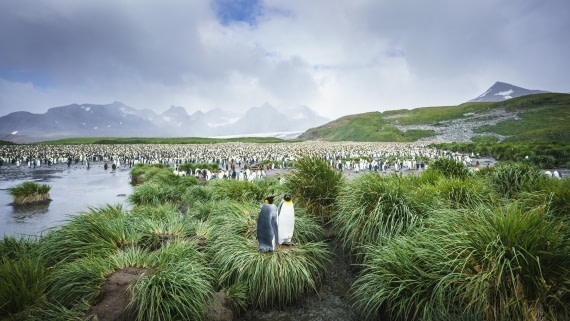