Weight: 3 to 8 kg (varies throughout the year).

Appearance: Pale yellow heads. Eyes have a pale yellow iris. Throat and chins are brownish-black. Bright yellow band running from eyes around the back of the head. Dark grey backs and outer flippers with white on their bellies, chests, and the inner sides of their flippers.

How do Yellow-eyed Penguins feed?

Yellow-eyed Penguins hunt for prey between 2 to 25 km offshore. They are divers, able to reach depths of 40 to 120 metres. They do almost all of their foraging along the ocean floor of the continental shelf.

Yellow-eyed Penguins will forage in relatively close proximity to each other, but their breeding nests are built out of eyesight from other nests.

Yellow-eyed Penguins are a bit of an oddity of the penguin world when it comes to breeding habits. Most penguin species form densely packed colonies. Yellow-eyed Penguins on the other hand will not build their nests within visual range of each other.

Breeding begins at around 3 to 4 years of age, with pairings forming long-term partnerships.

Nesting sites are chosen in August with 2 eggs being laid sometime in September. Incubation lasts 39 to 51 days with both parents sharing the responsibility. While one parent is with the egg or chick the other is feeding at sea. The shifts are changed at least once a day.

Once the hatchling is 6 weeks old both parents will begin to go to sea at the same time so that they can keep up with the food demands made by their growing offspring. Fledging occurs in February, at which point the offspring (now weighing about 5 kg) is on its own.

How long do Yellow-eyed Penguins live?

The average lifespan for Yellow-eyed Penguins is 8 years though they can live up to 25 years in the wild (males tend to live up to twice as long as females).

How many Yellow-eyed Penguins are there today?

Do Yellow-eyed Penguins have any natural predators? 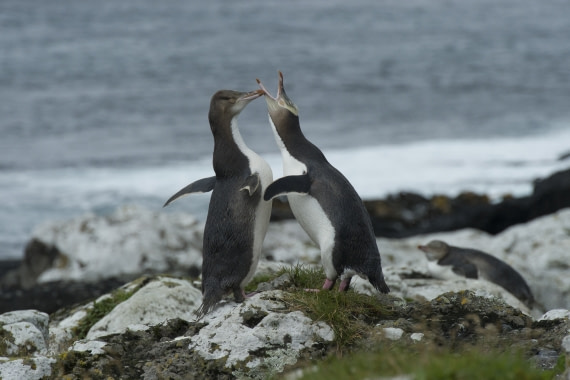