If you’d like your Arctic cruise adventure to offer a taste of something a little creepy then book a tour of Pyramiden, Norway.

Meaning “pyramid”, Pyramiden was a settlement and coal-mining endeavour that has been abandoned since 1998.

Found on the island of Spitsbergen, Pyramiden lies at the end of the Billefjorden. Named for the nearby pyramid-shaped mountain, the settlement was first founded by the Swedes in 1910. Coal was the main mining interest in the area, and even though the Swedes gave up the hunt in 1927 the Russians were more than happy to take over the operations, buying the rights and properties through the state-owned mining company Arkiktugol Trust.

Almost 1,000 Russians lived and worked on-and-off in the area for 70 years, with the mines finally being declared unprofitable in March of 1998.

The cold of the region has helped preserve the buildings and monuments that have descended from the U.S.S.R. era. Visitors get to step into history and get a look at what life was like for Soviet workers and families during the Cold War years. Pyramiden hosts still-standing block-style housing, mining facilities, and the world’s most northern bust of Lenin, all likely to still be standing 500 years from now thanks to the cold and dry environment. 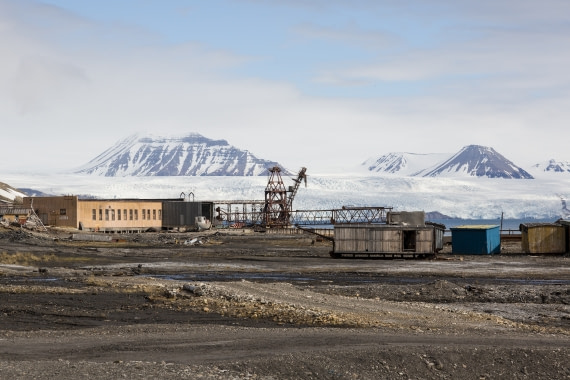