Out of Antarctica, into the Outbreak

On the morning of March 18, Oceanwide vessels Plancius and Ortelius were returning north across the Drake Passage, bound for Ushuaia after Antarctic expedition cruises.

On the morning of March 18, Oceanwide vessels Plancius and Ortelius were returning north across the Drake Passage, bound for Ushuaia after Antarctic expedition cruises.

By March 19, the ships were forced to change course to Buenos Aires after Argentina closed its ports in response to the coronavirus.

By March 20, Buenos Aires was also locked down. 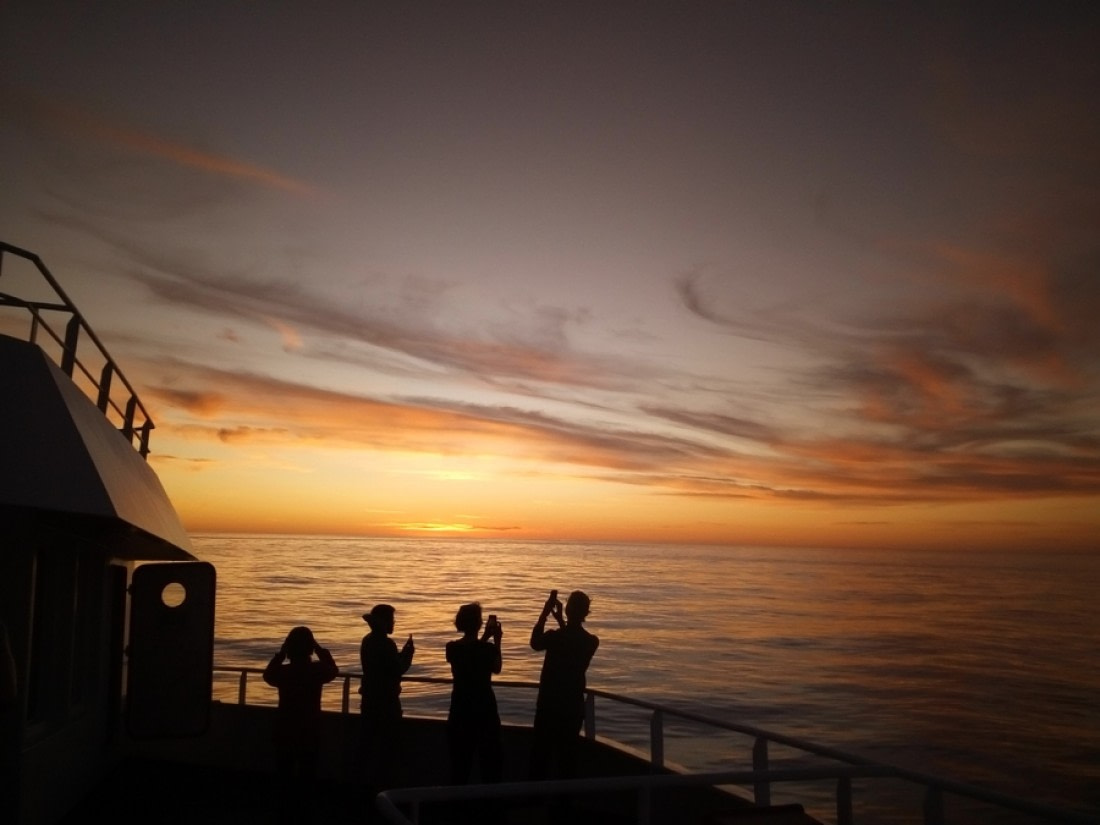 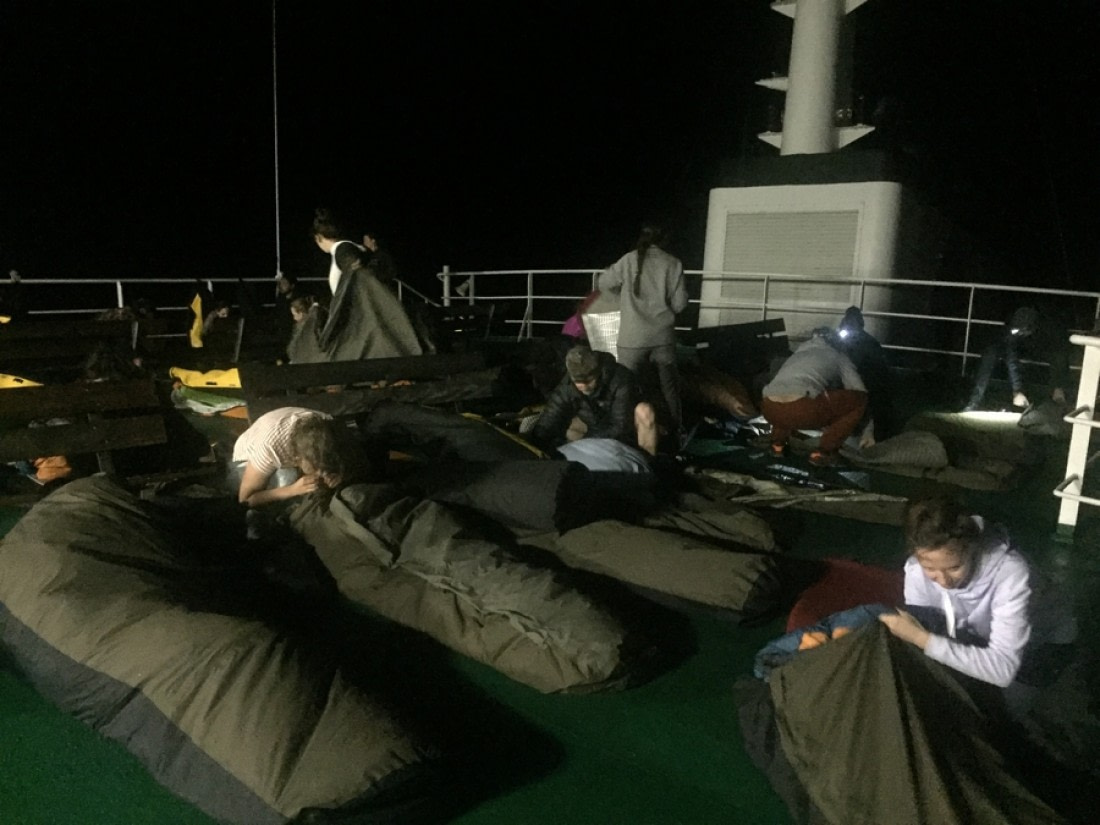 Trying to make the most of it, passengers were invited to sleep on deck, enroute to Montevideo. Photo by Rustyn Mesdag.

It was not until March 25, nearly a week after their intended disembarkation date, that the two ships were able to dock in Montevideo. But even after arriving, the ordeal was not over for our guests and most certainly not for our staff.

All passengers were required to secure valid airline tickets before being allowed to disembark. But because cancellations were occurring moment by moment, it would be another three days before the last guest was able to satisfy this requirement and finally return home.

Despite the uncertainty of these final days, however, our passengers remained in admirably good spirits, helping our staff keep the attitude on board patient and positive. And though often-conflicting reports of Covid-19 threatened to worsen anxieties, our guides and crew demonstrated incredible effort, innovation, and professionalism in the face of these challenges. 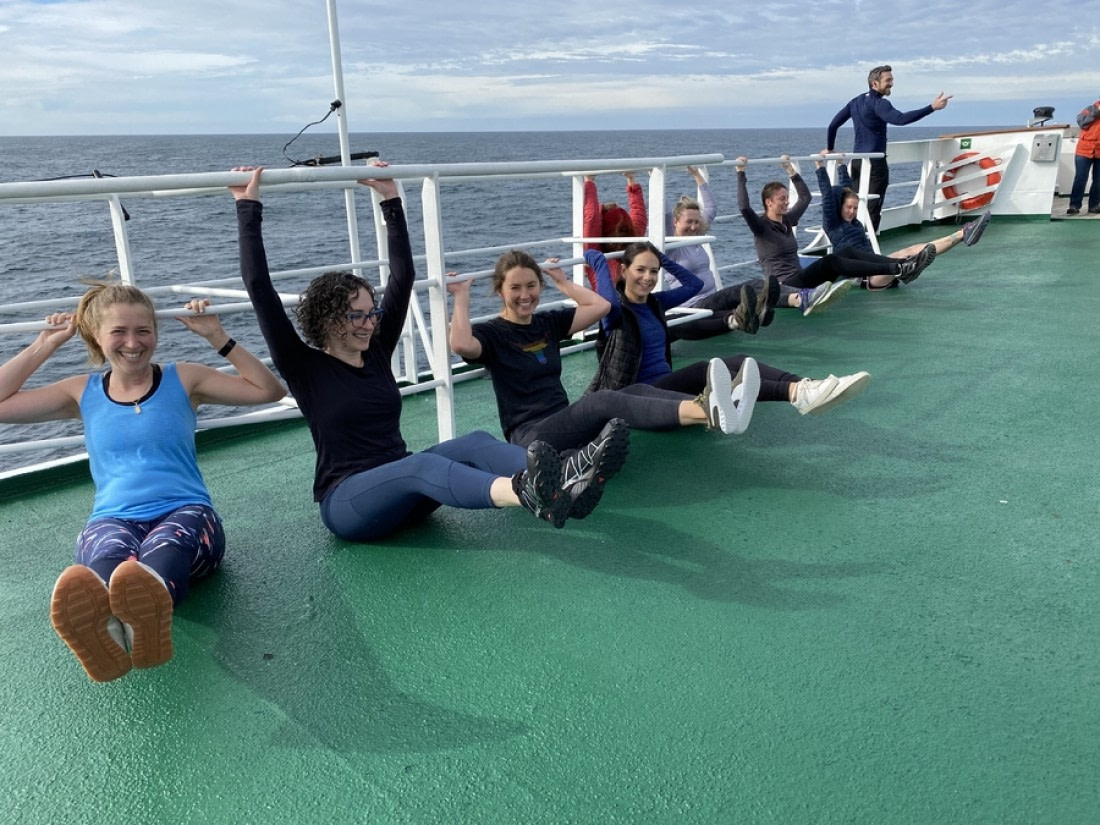 We could not be prouder that both groups cooperated so well during this unusual situation. And when, in the days to follow, we started to receive feedback from our passengers who were caught up in these events, we were even more pleased. 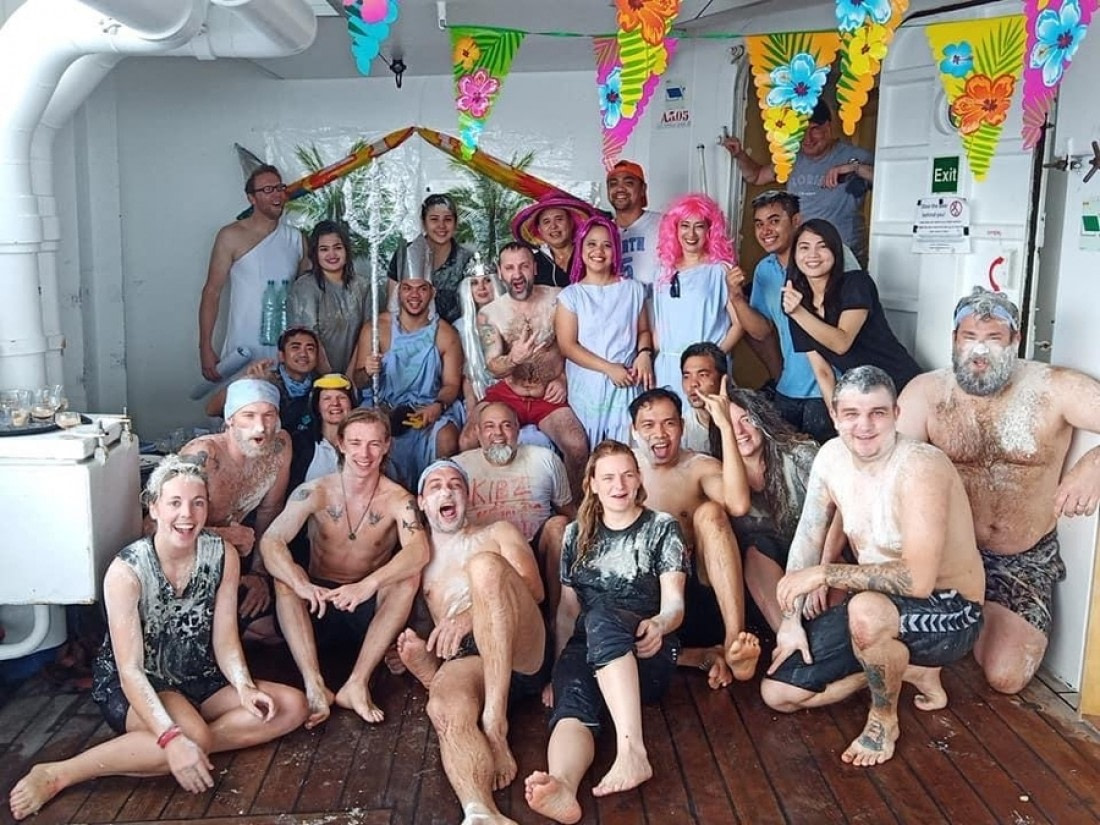 “When Plancius departed for Antarctica on March 9,” said American travel agent Margie Tomenko, “the coronavirus was beginning to spike. During our cruise, it spiked. Rumors galore were rampant. Were all flights cancelled? Would we be allowed to dock? How would we get to the airport? There were so many questions and confusing reports from way too many sources.”

But despite these difficulties, said Kate Hughes from the United Kingdom, “Universal support came to the fore – a feeling of solidarity and camaraderie between passengers, crew, and staff that none of us will ever forget.”

Passenger Cassandra Zook agreed, saying, “I don’t have words to express the uncertainty and anxiety of not knowing where or when or even if we were going to dock. We easily could have ended up with a ship full of hysteria. I am pleased to say that that was not the result.” 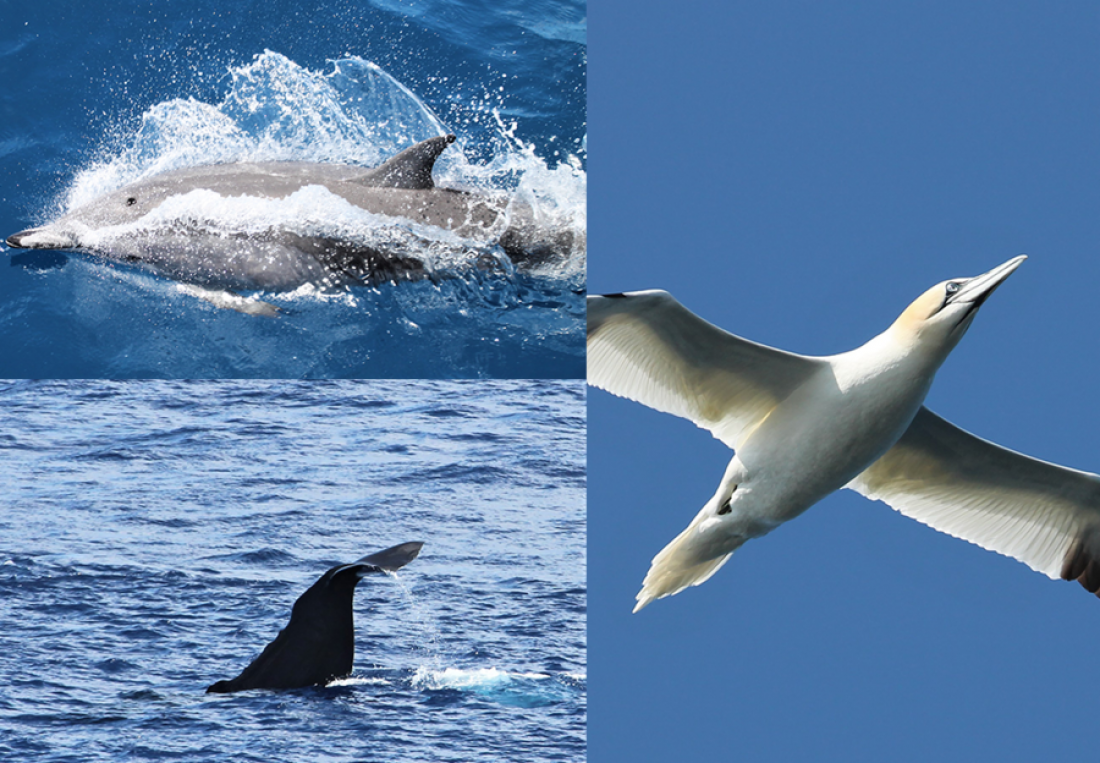 Other guests, like Don Jorgensen and Wendee Schavocky, specifically praised our overworked staff for continually putting guests first despite their own personal hardships: Our expedition leader on Plancius, Iain Rudkin, was expecting the arrival of his first child during the delays, and many of our Filipino staff were essentially stranded until restrictions lightened.

One passenger, Rosemary Burd, even wrote a poem dedicated to the staff of Plancius, which we’ll include at the end.

We mention all of this not to compliment ourselves, but rather to give credit where credit is due – both to our staff for their tireless hard work and to our guests for being so appreciative despite having their holidays upended. 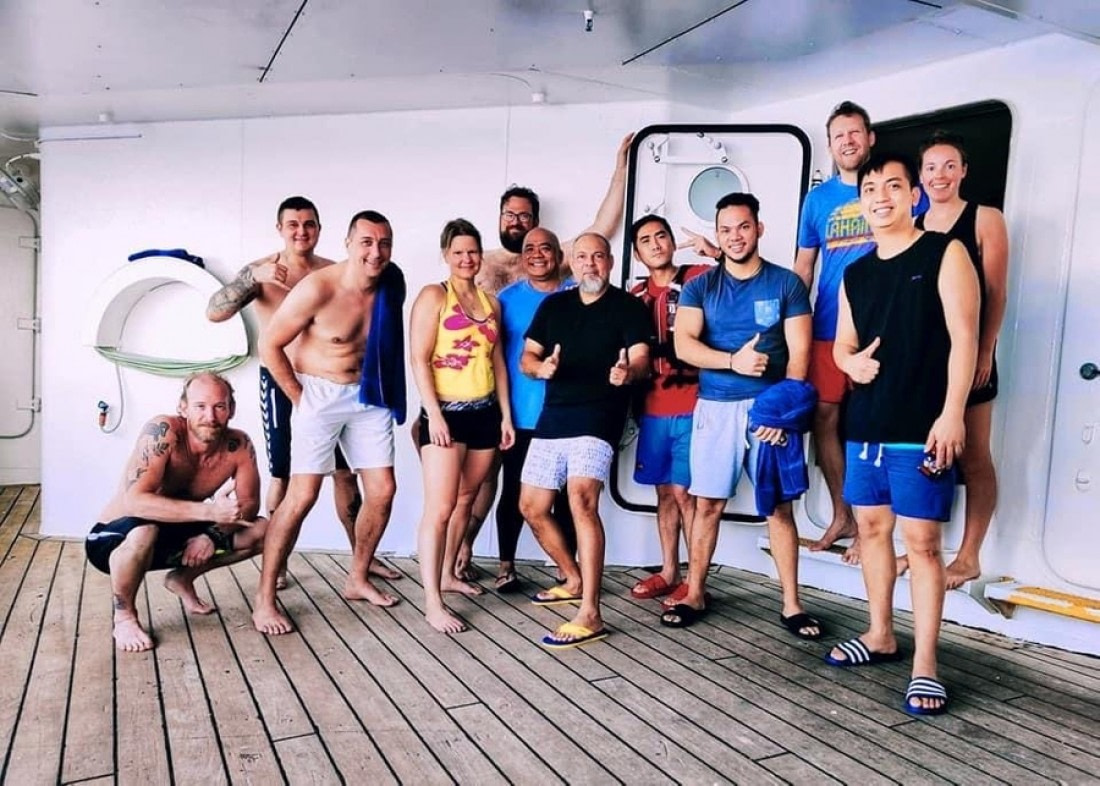 Gratitude is the only appropriate response. We are humbled and honored, and we wish to thank both groups for handling some of the strangest weeks in Oceanwide’s history with such grace.

Soon we will add to this report with a short blog about the return journey of our staff who, after disembarking passengers in Montevideo, spent more than a month sailing across the Atlantic to our home port in the Netherlands.

Until then, here is the first poem we’ve ever received from one of our guests. Though it is addressed to Plancius, we feel it also commemorates Ortelius and the experiences shared by both parties during their unexpectedly adventurous return from Antarctica. 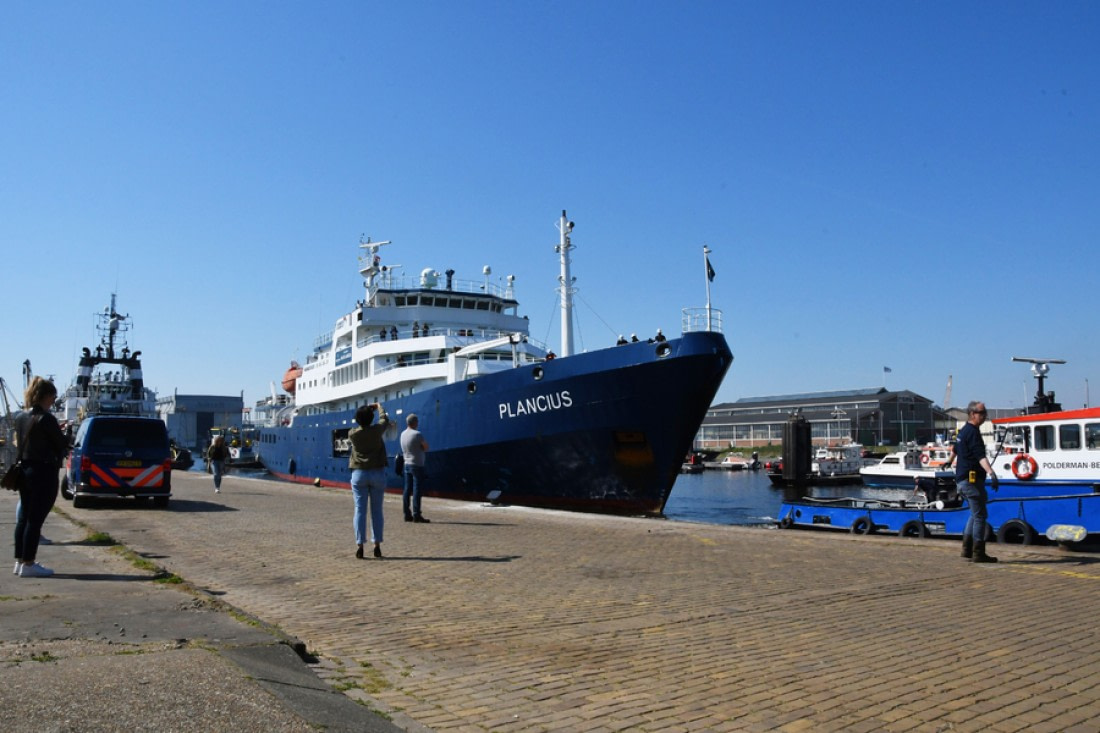 Farewell to the Plancius

Our Antarctic trip, PLA 32,
Won’t be forgotten by us, or by you.
It began with a cruise across a Drake Lake,
With barely a ripple, and never a shake.

Our Antarctic days were filled to the max
With landings, and learning, and fast Zodiacs.
After Artur and Iain said where we might go,
Mal and Dave took us higher in search of fresh snow.

Iain, our leader, would brief us for landing;
Tom, Steffi, Dorette would watch where we’re standing.
With Adam we kayaked midst icebergs and whales,
While Pippa identified fins, spouts, and tails.

(Felicity chimed in, much later it’s true,
To connect whale feces to Earth’s CO2.)
On the shore there were penguins in groups or alone,
Which we captured with cameras or trusty smartphone.

With Dorette to guide us, our photos got better,
Even when on the water our lenses got wetter.
But in the middle of Antarctic bliss,
Came news ‘round the world, of a nasty virus.

While our rough return sailing kept many in bed,
Cornonavirus, worldwide, slowly started to spread.
The Drake started shaking, our ship rolled and rocked,
Testing the skills of Nelleke, our doc.

The updates from shore tested all of our crew,
And showed each of us there’s nothing you can’t do.
With Rustyn and Celine we camped out one night,
On the deck, under stars – a magical sight.

You’ve managed logistics, consulates, flights,
Working from morning and into the night.
For all passengers on PLA 32,
You have been, from the start, an exceptional crew.

So we sail now into 35+ latitude,
Our hearts filled with awe, and also with gratitude.