A small bay northeast of Port Stanley, Sparrow Cove was once the resting place of the famous SS Great Britain

The Former Resident of Sparrow Cove

At the time of its construction in 1843, the SS Great Britain was the largest ship in the world. It was the first propeller-driven steamship ever built, crossing the Atlantic Ocean in 14 days. After 43 years of service, she was converted into a sailing ship, but in 1886 was damaged rounding Cape Horn and barely managed to reach the Falklands. As repairs would have been too expensive, she was sold and beached in Sparrow Cove. In 1970 the SS Great Britain was transported to the United Kingdom, where she was completely restored. She is now a museum ship in Bristol.

The sheltered Sparrow Cove has a lot to offer bird lovers, as many winged species can be seen in and around the area. For one, Sparrow Cove is home to a large gentoo penguin rookery with approximately 1,600 members. Other birds species that breed and live around Sparrow Cove are the Falkland steamer duck, upland goose, Magellanic snipe, and red-backed hawk. 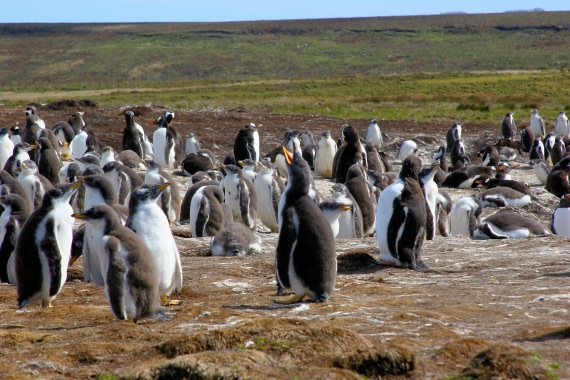