A pleasant beach in Antarctica’s larger Andvord Bay, Neko Harbour is a scenic landing site that offers great views of gentoo penguins and a nearby glacier

The whaling ship and floating factory, Neko, is where this scenic Antarctic bay got its name. Neko was stationed here from 1911―24 after the bay was discovered by Belgian explorer Adrien de Gerlache during his 1897―99 expedition.

Gentoo penguins breed on the hill above Neko Harbour, while Weddell seals and fur seals often haul out on the beach. If we are lucky, we may see these animals during our visits. But even if the Neko Harbour wildlife does not make an appearance, the scenery is nevertheless fantastic.

Neko Harbour’s glacier is especially lively, frequently calving large chunks of ice that splash thunderously into the bay below. We will keep a close lookout for these calving events, since they might create flood waves that can reach the shore in less than a minute.

The landing at Neko Harbour is known as a continental landing, as it is connected to the Antarctic Peninsula. Along with the penguin life, skuas sometimes roost on the rocky outcroppings above this site. We will keep a safe distance from their nests, however, as skuas like to dive-bomb trespassers. 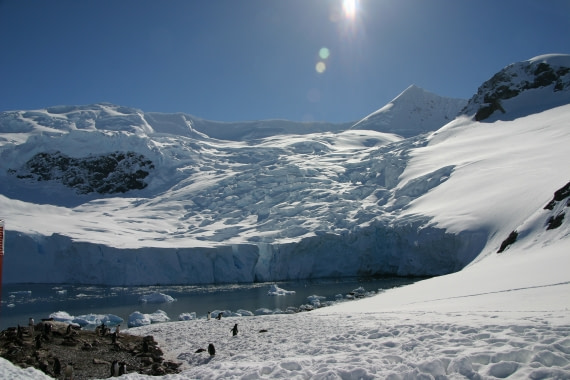