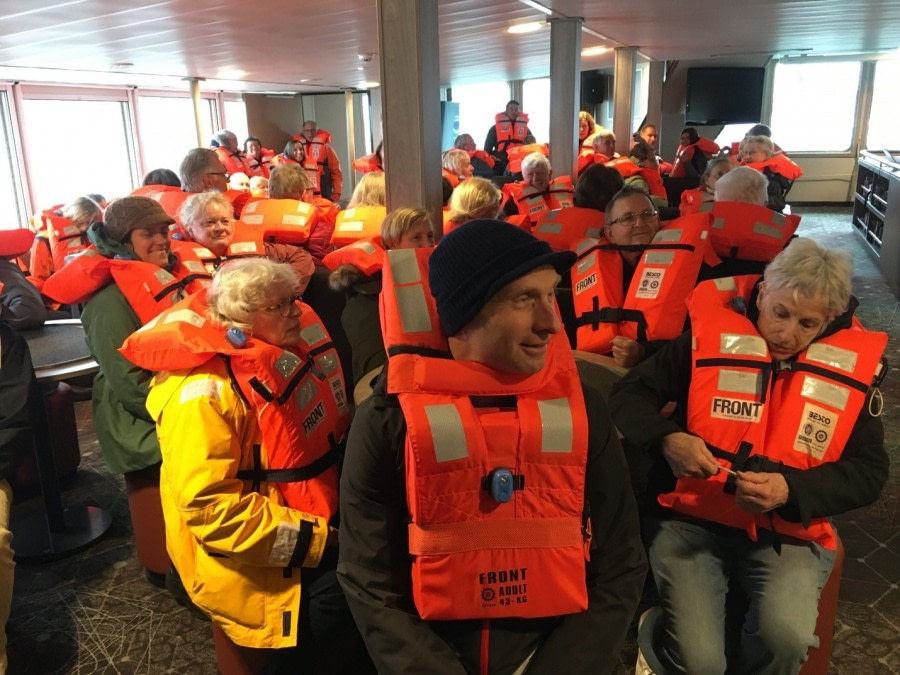 The guests arrive in the late afternoon and when everyone has unpacked and settled it is time for the very important safety drill and rescue boat evacuation exercise. All goes smoothly and after a well-deserved and tasty dinner the Plancius heads off for yet another adventure. We leave the local eider ducks (even one king eider), kittiwakes, little auks and Brunnich’s guillemots behind and have a smooth nocturnal sailing to our first stop: Krossfjorden. 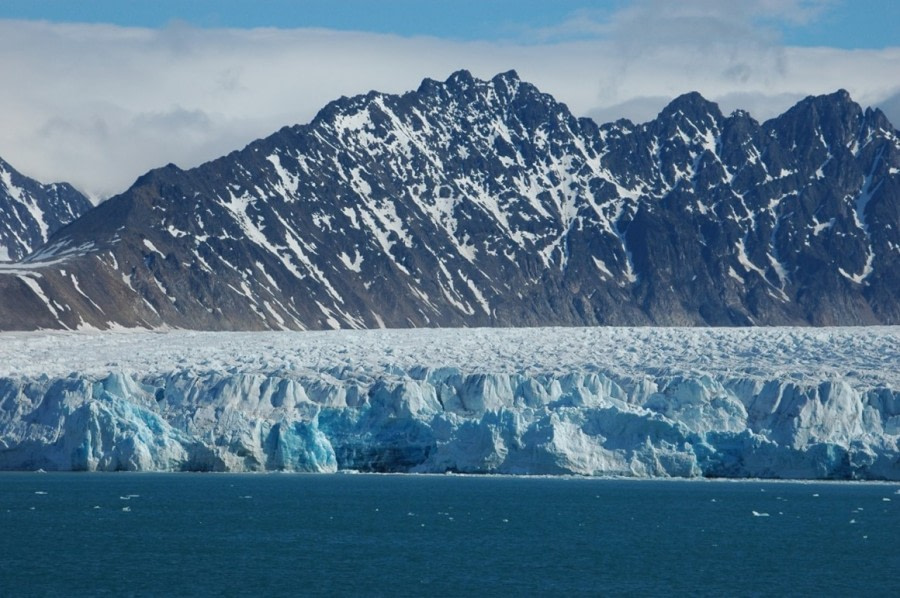 We wake up in a magical place, with the large Lilliehöökbreen dominating the Krossfjorden. Deep blue pieces recently calved off the glacier litter the bay, some of these populated by kittiwakes and arctic terns. On the distant shore Svalbard reindeer graze, dwarfed by the looming mountains surrounding the bay. Cameras are being taken from their bags to capture the place, and it is difficult to stop shooting because at each new angle the landscape seems even better than before. We must move on though, and during lunch we sail to the 14th of July Bay, where we will have our first Zodiac landing of the trip. This bay got its rather peculiar name from Prince Albert I of Monaco, who did quite a bit of Arctic exploration early in the 20th century, and decided to honour the French National Day, also known as Bastille Day. Afternoon – 14th of July Bay 17h30 GPS Position: 79°12.1’N / 010°04.5’O Wind: NE 3 Sea: flat Weather: light overcast Temperature: 7°C With a calm sea we have an easy landing and soon the first group of guests go on a walk with the guides towards the ‘hanging gardens’, a large patch of blooming purple Saxifraga at an overhang. High above the area thousands of kittiwake’s nests in the cliffs, neighboured by Brunnich’s guillemots. Lower on the slopes a dozen or so reindeer graze, permitting us the first close-up views of these animals. Their legs are clearly shorter than that of their conspecifics living on the mainland, an adaptation to living in the cold. After the hike, we cruise in the Zodiacs past the birds nesting nearer to sea level. Here puffins too breed, showing their beautifully coloured bills. We are back at the Plancius precisely in the time for the daily recap, followed by a lovely diner. 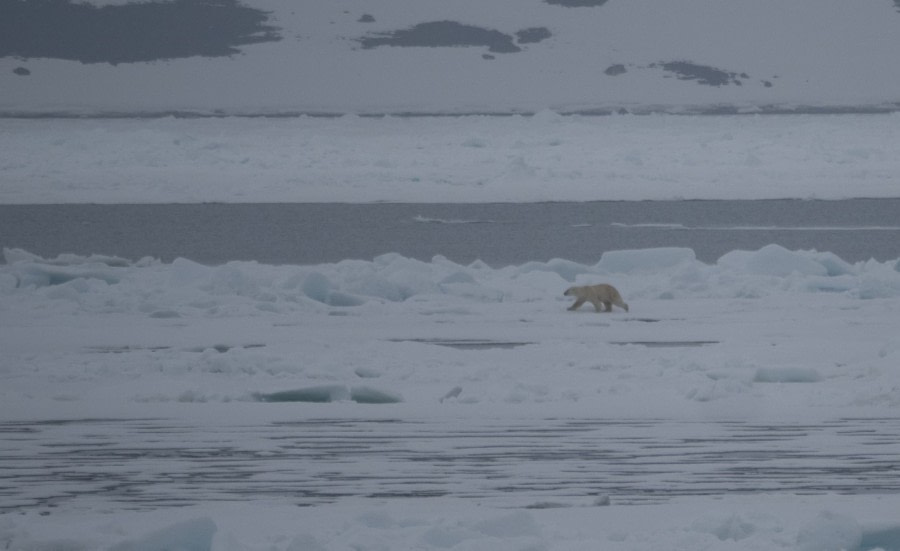 This morning we head into Woodfjorden and we find bands of sea ice that slows our progress into the fjord but does prevent us from landing at Texas Bar at 10:00. We have the chance to visit the historical hut and get onto the higher ridge to enjoy the views of the bay and the flat land on the Northern side of the ridge. A group of more energetic hikers has a very nice experience while walking on the soft snow towards the waterfall on the back hills, but the heavy conditions make it almost impossible to continue, but the view from higher grounds give a completely different perspective to their lives. Afternoon – Ship Cruise Woodfjorden 17h30 GPS Position: 79°44.1’N / 012°55.5’O Wind: NE 3 Sea: flat Weather: light overcast Temperature: 0°C In the afternoon our plans are altered because of foggy conditions, but as we are cruising out of the Fjord to our plan B destination the captain spots a Polar Bear on the sea ice! We can observe some incredible behaviour, as the bear is trying to approach a seal to make lunch of it… but fails as the seal eventually spots the hunter and slides into the water. The bear takes a new route and walks away from the location, and we go back to our original course. As we approach Mushamna, our proposed landing, the captain again spots a bear on the cliffs above the kittiwake nests. Amazingly it is not just one bear but a mom and a cub! So, we are blessed with the chance to see them lay on the snow and have some beautiful mom and cub time! After dinner there is chance to visit Moffen, a strange sand bank formation not higher than 2 meters off sea level that holds a walrus haul out. We spend some time ship cruising the location and then continue our rout to our next day’s locations. What an amazing day! Excellent landing in the morning and our first polar bear encounters! 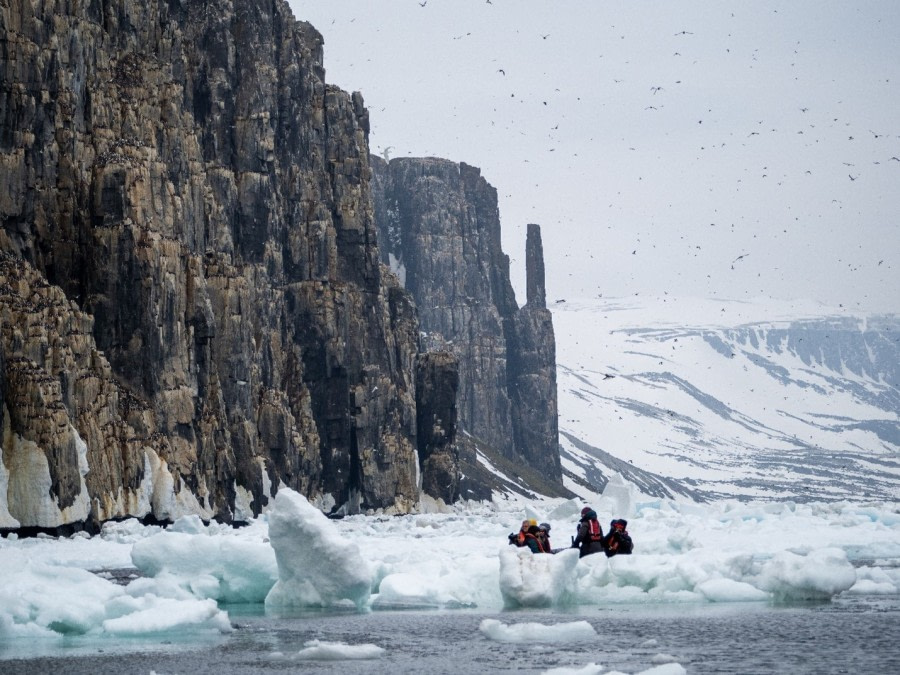 A sighting of a Polar bear leads to an exciting start of the day! The polar bear is walking with a fast pace along the beach and clearly stands out against the dark rocks, which provides some amazing photographs. After following the bear through our binoculars and cameras for a good while, we start the slightly delayed plans for the day: A zodiac cruise along Alkefjellet. The ship was already welcomed by multiple Brunnichs- and Black guillemots when we are boarding the zodiacs, and their numbers only increase as we came closer to the cliffs. Alkefjellet is home to the humble number of ca. 60.000 breeding pairs of Brunnichs guillemots, it feels like a scene of the film Birds! Every inch of the majestic dolerite cliffs seemed to be filled with guillemots and kittiwakes and they were flying everywhere. The lesser fortunate amongst us will remember the latter well, as they were presented with a souvenir in the form of guano droppings... Whilst navigating through the sea ice, guillemots are modelling for us on small icebergs, as well as some Great Skuas and kittiwakes. The adventurous amongst us dare to conquer the cliffs and sea-ice in sea kayaks! The day is not over yet, back on Plancius we start making our way north and after not too long there are sightings of blue whales! We also activate our brains by learning about adaptations to the cold (in German) and are shown how ketchup on a plate can resemble the formation of glaciers (in English). During the recap we learn about the difference between whales and dolphins (or is there?) and everything you want to know about the blue whale. But the day does not end there! At ca. 21.30 we spot 3 polar bears eating a seal in the middle of the sea ice! The scenery is stunning: sea ice, polar bears, birds, and walruses resting on the sea ice and swimming along the ship! A brilliant ending of an amazing day, from start to end, very successful, exciting, and educational! 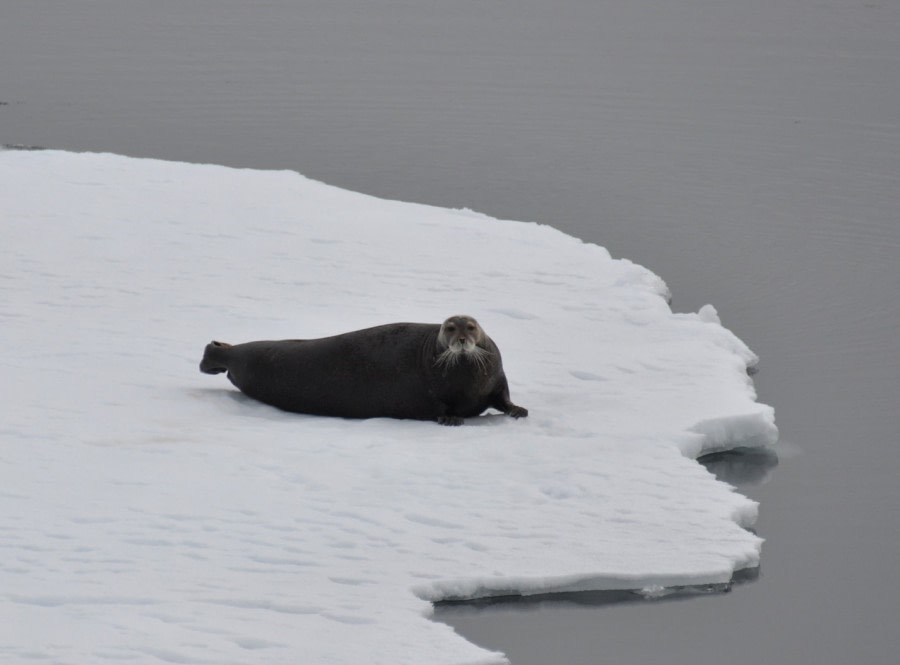 We wake up to a stunning scenery – nothing but water and ice. This day will be dedicated to the sea and pack ice. We spend the morning cruising through ice floes, observing the flight of birds and the beautiful and ever-changing patterns of ice. We move north and west and further north. Later Cas speaks in English about the adaptation to the cold and Andreas takes the German public into the world of glaciers. The afternoon is again spent cruising the pack ice. This time we find a bearded seal on a floe and have a long time to observe it. Two polar bear lectures (in English by Chloe and in German by Sylvia) give us great insights about this charismatic animal. We finish the day with a very different dinner: an arctic BBQ on the aft deck with great food, sodas, beer, wine, and punch – and a lot of dancing. Our northernmost position of the day is N80°49.5’. 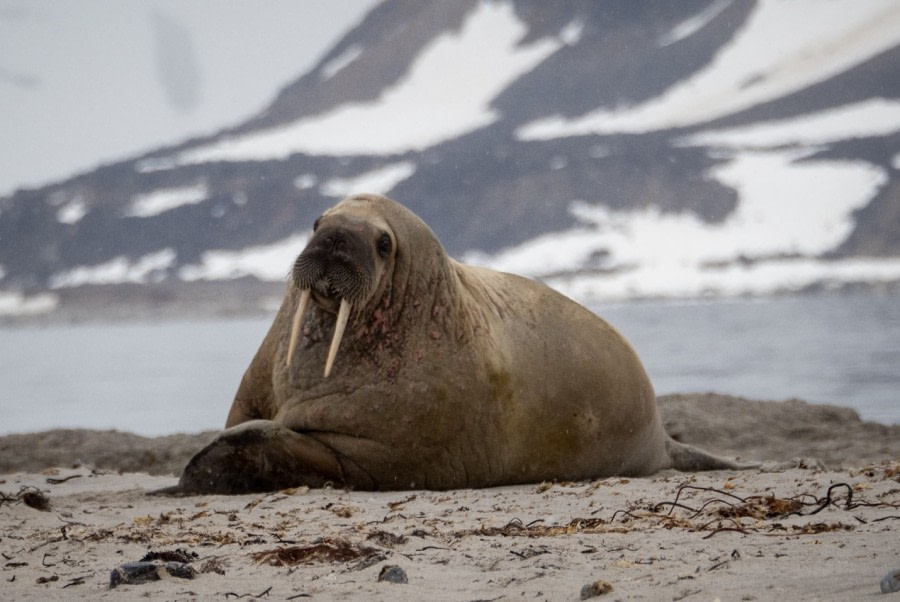 This morning we start our day in Raudfjorden. At first, the kayakers go out with Alexis and Julia into the bay in front of Smithbreen, a beautiful glacier. Then we start disembarking our Zodiacs on shore and Pablo, Andreas and Guillermina are waiting for us. We spend at least three hours in this amazing place and have two options to go hiking. The longer hike is led by Pablo, and the shorter one is led by Silvia. Both hikes eventually go to places where we have spectacular views over the surroundings. The guest who do not feel fit to trudge through the deep snow stroll around the beach, where there is an historic hut of the famous hunter “Sven of Stockholm”. The afternoon holds a surprise because of the great encounter with big walruses at Smeerenburg. On shore, Julia teaches us how to approach these animals and we enjoy seeing them in their own environment. We stay at 50m distance, which does not disturb these majestic animals at all, meaning that we can observe their natural behaviour at close range.

This morning we have bright and sunny weather, perfect for a bit of hiking followed by a polar plunge! But first the hikes. One group stays low down and has an easy stroll around the beach which is lined by strongly deformed rock formations. A second group goes a bit higher, while the third group goes for the long (ca. 2h) hike to the top of an old moreen for a splendid view of one of the glaciers that straddle St. Jonsfjord, named after the apostle St. John. Several Svalbard rock ptarmigan are seen, the only bird that truly is a Svalbard resident as it is the only bird that stays the winter. Back at the shore it is time for what the young guests have been asking for many days now, the polar plunge. Wearing nothing but shorts and/or bikinis, some 30 daring guest brave the near freezing glacial melt water. Most are out within seconds but some are more polar bear like and manage close to a minute or so. After a quick towelling it is time to dress up and Zodiac back to the Plancius for a warm shower and a good meal. Afternoon – Alkhornet 16h00 GPS Position: 78°12.8’N / 13°52.0’E Wind: NE 2 Sea: calm Weather: overcast Temperature: 15°C In the afternoon we head for our last destination, Aklhornet. We land on a sheltered beach and climb up to the tundra area stretching out for several hundred meters under the looming triangular cliff of the Alkhornet. On the tundra reindeer graze and kittiwakes collect nesting material, which they transport hundreds of meters up to the cliffs. They share these cliffs with thousands of Brunnich’s guillemots, lining the narrow ledges. Several pink-footed geese fly by, cackling loudly. Back on board the Plancius we have yet another lovely meal, followed shortly by the captain’s cocktail and final slideshow of this fantastic journey. 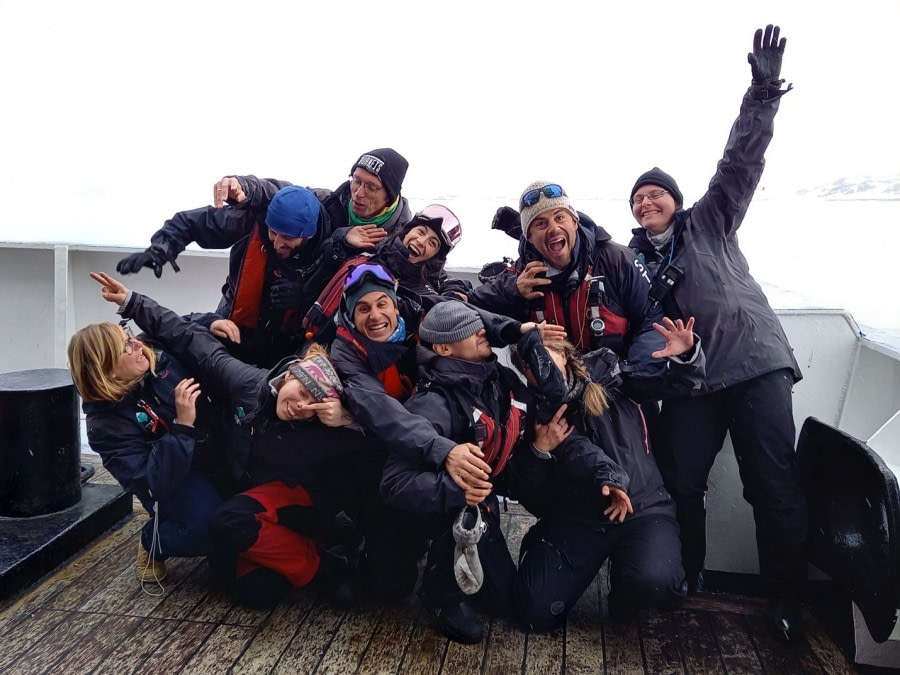 Early this morning, we arrive in Longyearbyen. While we enjoy a last breakfast on board, our suitcases are taken off the ship. It is a sad moment to disembark from the Plancius, which has been a comfortable and cosy home during this unforgettable journey. We have have shared really unique moments, have seen a lot of animals, and made new friends. Loaded with fond memories we now must head home.

More about the El Plancius » 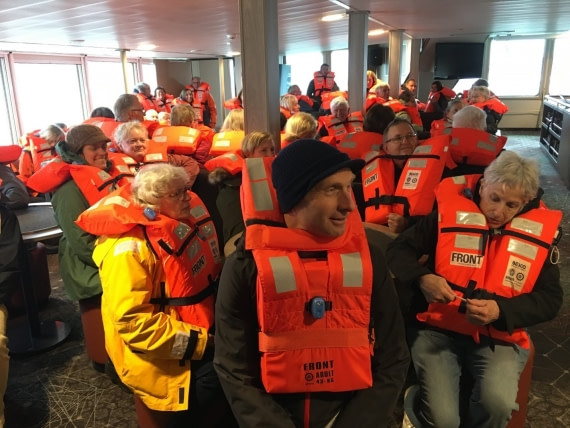 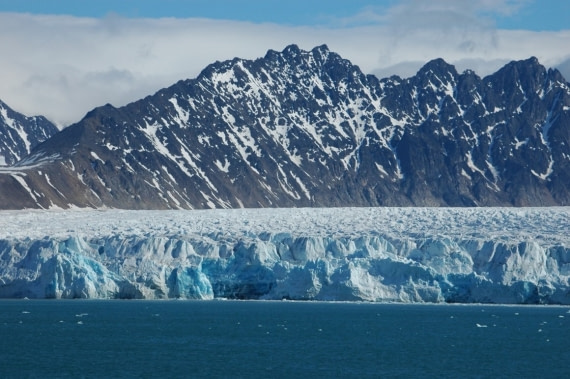