Formed when broken shards of sea ice freeze together, pack ice is also known as “ice pack” or simply “pack,” and is characterized by collective areas of free-floating ice

Pack ice is one of the most widely seen variations of ice, defined simply as any area of sea ice that is not attached to land and is made up of smaller pieces of ice that have frozen together. If you have ever sailed around Antarctica or the Arctic, you can hardly have avoided encountering pack ice that is either loose or dense.

Pack ice is made up of smaller ice fragments that have frozen together into a solid body. These smaller pieces are called drift ice, which comes in various forms. Ice floes are the largest and most common form of the drift ice that comprises pack ice. Ice floes can be several meters wide, even several miles, commonly colliding and pressing against other ice floes that drift on the surface of the sea. When currents and winds bring these floes together and they freeze into a single large mass, the result is pack ice. Naturally, pack ice often blocks sea routes, securing the careers of many an icebreaker.

Another type of ice often seen in the polar regions is fast ice, at first glance easily mistaken for pack ice. But fast ice, though it extends over the surface of the water, is still fastened to the shoreline and has yet to break loose. If it ever does, it will acquire the status of free-floating pack ice. Until that day, it can only dream.

Not surprisingly, the two main accumulations of pack ice are located in the Arctic and Antarctica. The sea ice in both of these regions changes dramatically with the seasons, and though some years witness a pack ice increase in certain locations, overall the ice is declining in the polar regions due to climate change. During the Northern Hemisphere winter, Arctic ice is roughly double what it is in the summer. Antarctica demonstrates an even greater accumulation: The enormous continent expands to nearly twofold its usual surface area due to pack ice formation during the Southern Hemisphere winter. The thickness of the pack ice in both the Arctic and Antarctica ranges from a few millimeters or inches to around  3 – 4 meters (10 – 13 feet), though it takes more than freezing temperatures to thicken pack ice.

When pack ice grows to a substantial thickness, it is due more to the currents than the temperature. Pack ice will not continuously grow due to freezing alone, because at a certain point the ice simply insulates itself, making it harder for the temperature to impact it. Adding to this effect, sea brine is excreted from pack ice the thicker that ice gets. Sinking through the pack ice, this brine makes the salinity under the ice higher, decreasing the freezing point to a lower temperature: -1.8°C (28.76°F). 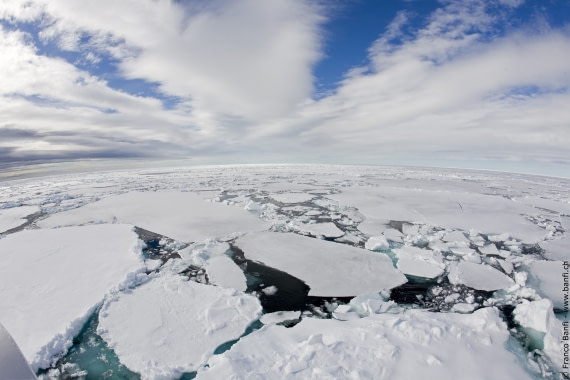