Amongst the twists and turns of Kaldfjorden

Spotted in Troms, Norway, Kaldfjorden cuts the island of Kvaløya almost in half. Dark snow-capped mountains dominate the scenery; at least 10 of the peaks stretch higher than 700 metres tall, with Store Blåmann (“Big Blueman”) soaring up to 1,044 metres at its top. As big as it sounds, Big Blueman can in fact be climbed without equipment (although the last portion of the climb does get quite steep).

The lands around Kaldfjorden make for a hiker’s treat. Don’t worry, nobody is going to force you to climb a mountain – you can always opt for a much more leisurely stroll along the shores.

This is also fishing country, so if fishing is your thing, you’ll enjoy the scores of cod that flood the area. In fact in March of 2010 a local fisherman managed to reel in the 2nd-biggest cod ever caught on a rod in Norway, missing the record by only 0.4 kg!

If you’d like to investigate the mysteries hidden in the folds of Kaldfjorden we’d suggest the following cruises: 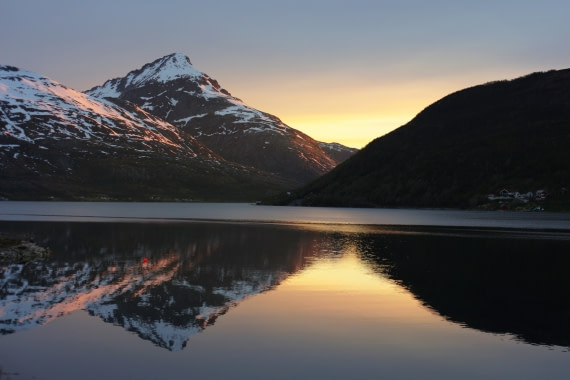