For the most part Tussac-birds forage amongst beached seaweed found along shorelines. They will however pick at carrion and the remains of food left by animals and humans in other nearby locations.

Tussac-birds are somewhat notorious for being very tame when near humans.

The Tussac-bird breeding season runs from September through to December. Nests are cup-shaped, placed amongst rocks, grass clumps, bigger holes, or in buildings. They are constructed of grass and lined with feathers.

1 to 3 white eggs with red spots are laid, often 2 broods per breeding season. The eggs are incubated for a period of 2 weeks. After hatching the chicks fledge after an additional 2 weeks.

How long do Tussac-birds live?

Passerines in general live about 3 years in the wild.

How many Tussac-birds are there today?

There are an estimated 10,000 breeding pairs of Tussac-birds found on the Falkland Islands.

Do Tussac-birds have any natural predators?

Tussac-birds are prey for rats and cats. 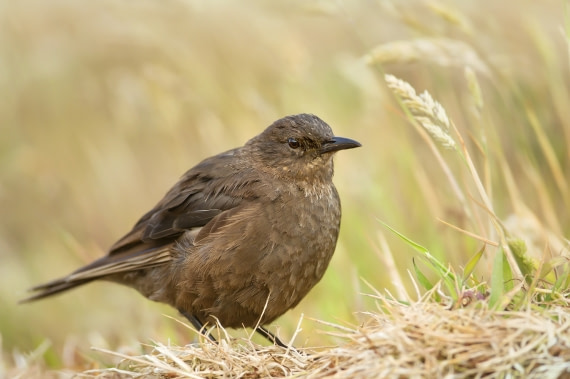