The history of Barentsburg

Barentsburg started out as a Dutch-owned mining town in the 1920s. The Dutch sold the area’s concession to Russia in 1932.

Russian state-owned Trust Arktikugol has been mining in and around Barentsburg since 1932. About 100,000 tons of coal are shipped out every year. With the decline of the mines the local population, made up primarily of Russian and Ukrainians, has itself declined to the current tally of about 400.

The combination of the Soviet-era architecture combines with the coal mining operation and the starkly beautiful surroundings to create some striking images. Small as it is, Barentsburg itself can easily be explored within 2 or 3 hours.

Along with the Pomor Museum, Barentsburg boasts the 2nd-most northern bust of Lenin (Pyramiden takes first place) plus a star-and-slogan located up on the hillside, acting somewhat like a Soviet-era Hollywood sign proclaiming “Peace to the World.”

Since this is a Russian zone in an otherwise foreign land (Svalbard is under Norwegian sovereignty) Barentsburg does claim first place in having the world’s most northern diplomatic mission of any kind. 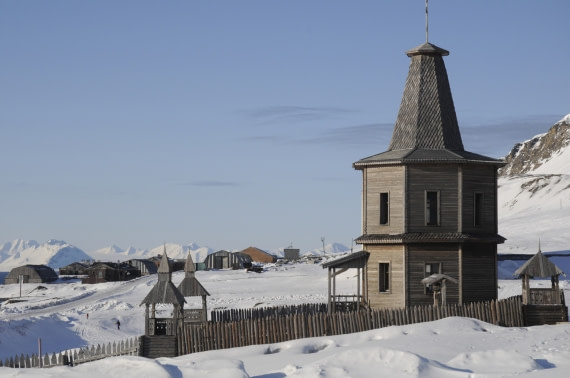