PLEASE NOTE: N.B. This is a voyage, with a group of scientists on the ship, who will follow-up on the investigations which Dutch researchers began on Edgeøya in the 20th century. The passengers will be given the opportunity to share the experiences of the scientists, but will also have the opportunity to join some rather extended walks to special places of interest. All itineraries are for guidance only. Programs may vary depending on ice, weather, and wildlife conditions. Landings are subject to site availabilities, permissions, and environmental concerns per AECO regulations. Official sailing plans and landing slots are scheduled with AECO prior to the start of the season, but the expedition leader determines the final plan. Flexibility is paramount for expedition cruises. The average cruising speed of our vessel is 10.5 knots.

This is a voyage, with a group of scientists on the ship, who will follow-up on the investigations which Dutch researchers began on Edgeøya in the 20th century. Academic voyage organized by the Dutch University of Groningen to the Island Edgeøya south of Spitsbergen. Voyage dedicated to science and research.

Today we aim to make landings at the rarely visited coast of south Spitsbergen, at the bay of Isbukta. We also hope to land at the mountain of Stellingfjellet, near the largest colony of Brünnich’s guillemots in Spitsbergen.

Day 3: Wild west side of Edgeøya

Sailing to Kapp Lee, we can see an interesting octagonal trapper’s hut built in the early 20th century. Fifty years ago, a Dutch expedition began research of polar bears, reindeer, birds, and vegetation from this hut.

We then continue our investigation of seabird colonies, vegetation, and reindeer in the valley of Rosenbergdalen.

Often we see a herd of walruses on this beach, and there is also a fair chance of seeing polar bears here.

While some of our scientists will stay in the area of Kapp Lee today, others will sail to the east side of west Spitsbergen (west side of Storfjorden). Here we plan to walk to breeding places for ivory gulls in Agardhfjellet, which stands about 300 meters (980 feet) high. The valley leading to the outcrops that house the nests is littered with fossils of belemnites and ammonites.

Sailing into the waterway of Freemansundet, we plan to land at the tundra lowland of Sundneset, on the island of Barentsøya. Here we aim to visit the hut of a German scientific expedition (Würzbugerhütte) from sixty years ago before taking a brisk walk across the tundra in search of Spitsbergen reindeer and barnacle geese. After that, we plan to go on a Zodiac cruise near Freeman Glacier and visit a kittiwake colony in a canyon close by.

Today we cruise to Diskobukta on the west side of Edgeøya. After a scenic Zodiac cruise through the shallow bay, we land at Blankodden on a beach littered with whale bones and tree trunks that have drifted in from Siberia.

We may also climb to the rim of a narrow gully that is inhabited by thousands of kittiwakes, black guillemots, and piratical glaucous gulls.

During the breeding season, the base of the cliffs here is patrolled by Arctic foxes and polar bears searching for young birds that have fallen from the nesting ledges.

Alternatively, we might land at Plurdalen, where extensive oil explorations were carried out 40 years ago.

Russian Pomors built a hunting station in Habenichtbukta, where they lived during the 18th and 19th centuries. Though we are not permitted to enter this area, we can enjoy views of it as we sail past.

We intent to land nearby, making an inland excursion into an area where we may see divers, ducks, geese, and reindeer among the area’s ponds and lakes. It is believed that, two centuries ago, a group of stranded Russian sailors once lived in this area for many years, surviving solely on reindeer.

Moving on to Andrétangen in Tjuvfjorden, we have a good opportunity to observe a herd of walruses near an old trapper’s station.

Some distance inland, near a lifted shore in a surf zone formed thousands of years ago, we can see the ancient skeletons of stranded whales. Later in the day, we aim to sail by the protected area of Tusenøyane, or Thousand Islands.

We may alternatively land at Halvmaneøya, an uninhabited island and nature preserve southeast of Edgeøya that used to be a bear trapping area. Remains from that period can still be seen here.

We start the day by quietly cruising the side fjords of the spectacular Hornsund area in southern Spitsbergen, enjoying the scenery of towering mountain peaks.

The mountain of Hornsundtind rises to 1,431 meters (4,695 feet), while the peak of Bautaen shows why early Dutch explorers gave this island the name Spitsbergen, meaning “pointed mountains.”

There are 14 magnificent glaciers in the area and a fair chance we will encounter seals and polar bears.

We may also visit Isbjørnhamna Polish Research Station, where the friendly staff can give us an insight into their various research projects. Behind the station, the mountains are home to thousands of pairs of nesting little auks. 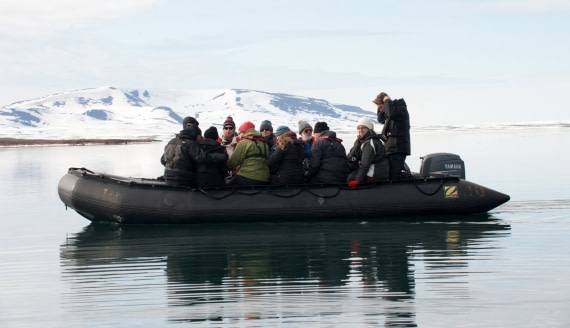