Slabs of frozen fresh water, icebergs are the free-floating offspring of glaciers and ice shelves

Few pieces of natural phenomena are more linked to Antarctica and the Arctic than icebergs, chunks of floating freshwater ice whose bulk (around 90%) lies hidden below the surface of the water. They are formed when pieces of ice from ice shelves and glaciers break off, or calve, falling into the water. The natural buoyancy of icebergs comes from the air bubbles trapped inside them, which may be tens of thousands of years old. Icebergs are not to be confused with ice floes, which are flat and smaller sheets of broken sea ice.

Icebergs occur in both the Arctic and Antarctica, though each region produces slightly different icebergs. Arctic icebergs tend to be smaller and less numerous, and their shape is usually more irregular than Antarctic icebergs. This is thought to be due to the rugged and creviced topography on which most Arctic glaciers form.

Antarctic icebergs, by contrast, are generally larger and can sometimes weigh several billion tons. In fact, they can be the size of small islands. (Iceberg B-15 was larger than Jamaica.) Large tabular icebergs occur only in Antarctica, and many smaller icebergs break off of them.

Though icebergs occur in both the far north and far south, Antarctica is known to produce the real giants. In July 2017, the Larsen C Ice Shelf, the fourth largest ice shelf in Antarctica, produced one of the most colossal icebergs ever witnessed in the modern world: A68, larger than the state of Delaware and twice as large as Luxembourg.

When climates rise, ice shelves and glaciers calve at a faster rate and produce more icebergs. Many scientists blame human-caused global warming, claiming this accelerated calving is the result of carbon dioxide and other pollutants released by industry. Others argue that the breaking off of giant icebergs is not necessarily a harbinger of worse ice conditions to come. 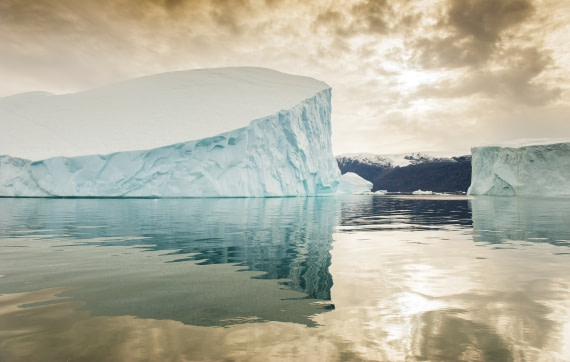