A number of our Svalbard cruises afford you the possibility of spotting a polar bear. Experience these living emblems of the Arctic for yourself, check out our wide selection of polar bear tours.

Where to see polar bears

Seal’s dread, whale’s bane, the ever-wandering one – all of these are names for the sometimes terrifying, often elusive, always majestic polar bear.

But where is the best place to see these amazing apex predators?

Svalbard, otherwise known as Spitsbergen, is among the top locations for spotting polar bears. In fact, polar bears are one of the primary reasons thousands of tourists embark on voyages to the Arctic, especially the Arctic archipelago of Svalbard.

So if you’ve ever wondered where to see polar bears, this location is one of the best answers to that question. Though nobody can guarantee you will spot one, there are a number of Svalbard cruises devoted almost exclusively to finding and viewing these magnificent animals.

Though polar bears can be found all over the circumpolar north, our polar bear tours focus on northern Spitsbergen, the largest island in the Svalbard island group.

But polar bears can be as dangerous as they are beautiful, so expedition guides armed with powerful rifles supervise all landings. Passengers are cautioned never to approach a polar bear, and sometimes landings are canceled if a polar bear is seen close to (or approaching) the landing site.

This is because polar bears are carnivorous hunters and can be aggressive if they feel threatened. Caution is paramount, as is understanding of our limitations. Nature calls the shots in the polar regions, and most polar bear tours only manage one or two sightings. 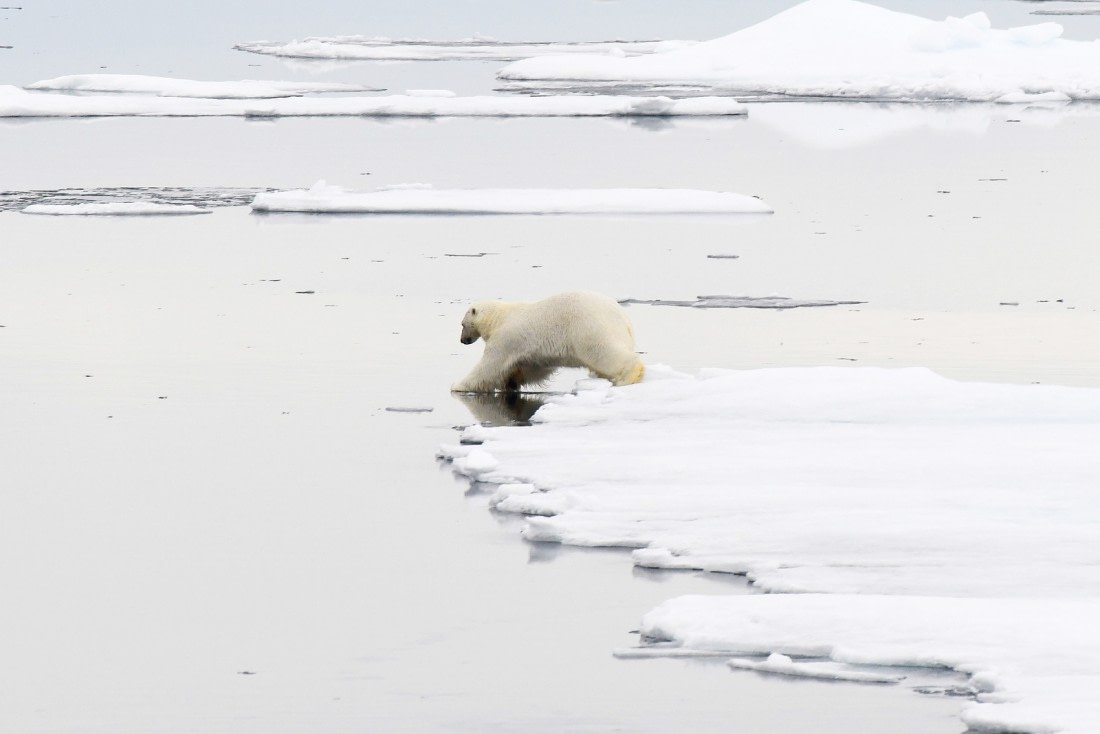 The lure of the polar bear tour

But if polar bear trips cannot ensure a sighting, why do so many people continue to book tickets? The reason, perhaps, lies in the reputation of the creature itself.

For many people, the polar bear is so linked to the Arctic that it functions virtually as a stand-in for the land itself: indomitable, exotic, deadly if not respected. Also, polar bears have fascinated and frightened humans since our earliest days.

The Saami and Laplanders would not dare speak the creature’s name, giving it a number of nicknames to avoid angering it. Inuit called polar bears “wandering ones,” Kets called them “grandfathers,” and their Latin name, Ursus maritimus, translates to “sea bear.” 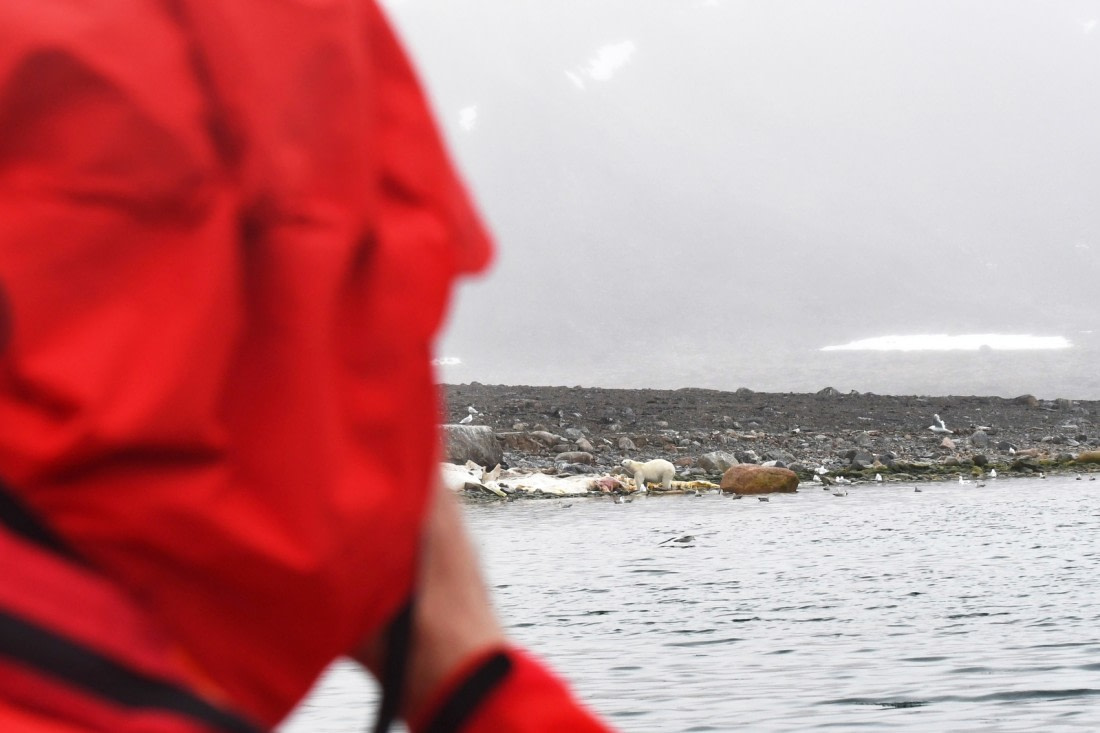 What powers the polar bear

At the end of the day, however, polar bears are animals just like us – albeit at the top of the Arctic food chain. They sleep (around 20 hours a day), they mate (in the spring, like many animals), and they eat (a lot).

Indeed, eating and finding food are among their main occupations. Many pictures taken on polar bear tours capture them in the act of doing just that. If you’re still wondering where to see polar bears, start by following the food.

Polar bears prefer a diet of seals, though they are far from picky: Reindeer, musk oxen, crustaceans, caribou, walruses, birds, bird eggs, whale carcasses, plants, and even other polar bears will do. When they’re fortunate enough to catch a seal, they consume mainly the calorie-rich blubber and skin, leaving the red meat and its abundant protein to their cubs. 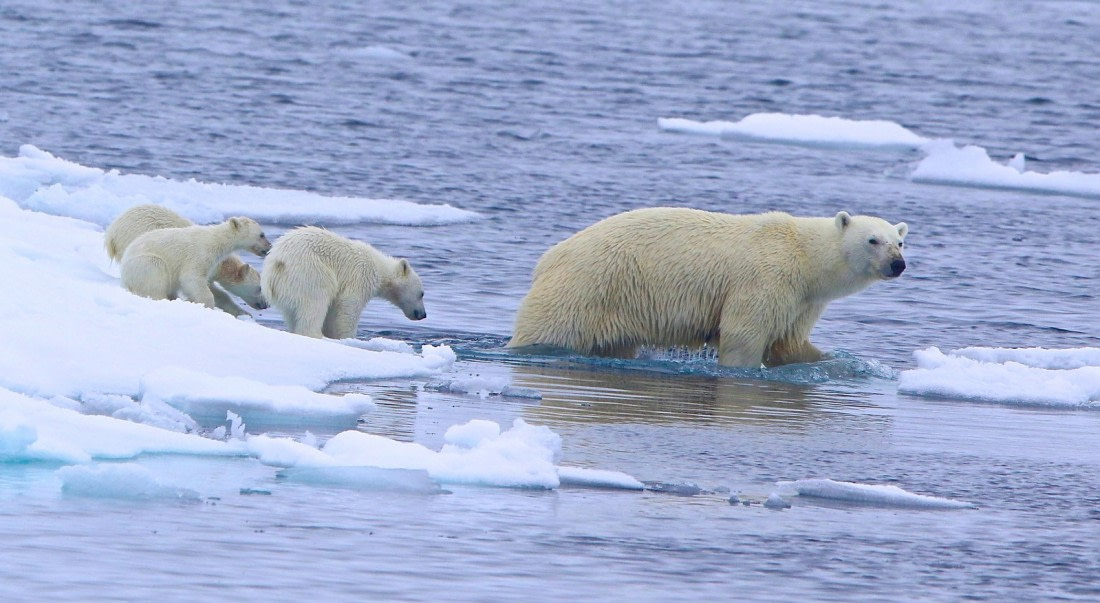 To find enough food, polar bears spend much of their time roaming great distances. Hunting leads them all over the Arctic, though polar bears are thought to have preferred feeding areas called “home ranges.”

Changing conditions in their home range, however, often compel polar bears to travel hundreds of miles in search of better food choices. These journeys can take some time, as polar bears are not fond of keeping up a fast pace.

Though polar bears can be elusive, their wide-ranging hunts explain why they can be found all over the Arctic. Svalbard polar bear tours, however, offer the highest probability of a sighting.

See the polar bear for yourself

Reading about where to see polar bears is one thing, but seeing one in person is another. And seeing a polar bear in the Arctic rather than a zoo is best of all.

A number of our Svalbard trips give you the possibility of spotting a polar bear. To find out more about how you can experience these living emblems of the Arctic for yourself, check out our wide selection of polar bear tours.